DAYTON, Ohio – University of Dayton student Michael Gibson grew up just a few miles from his current campus. But as a kid, the thought of going to school there seemed almost like a fairy tale set in a faraway land.


Gibson went to Kettering Fairmont High School, which is less than a 10-minute drive from UD’s campus during heavy traffic. Over the years, he’s attended football games at Welcome Stadium and watched a Flyers game or two. He spent plenty of time on and around the university’s urban campus.

“Growing up in the Dayton area, you know about UD,” Gibson said. “You drive by the stadium and the campus and think, ‘maybe I’ll go there someday.’”

Then reality would come crashing down on his dreams: Dayton is a top-tier private school and attending comes with a top-tier price tag. 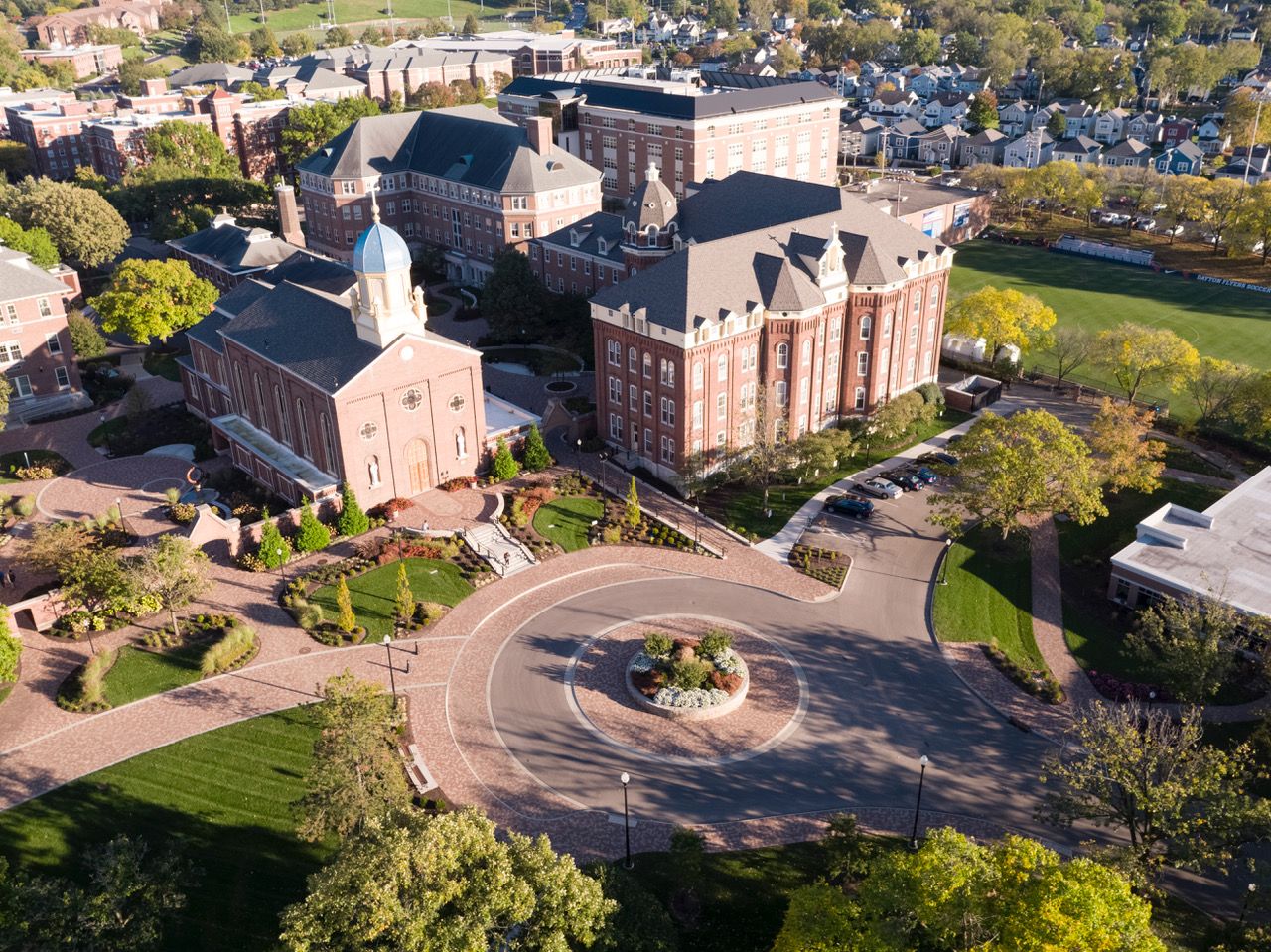 Gibson had earned a few credits attending Dayton-based Sinclair Community College while in high school, so that’s where he went after graduation.

He enrolled at Sinclair intending to become a paralegal. Late in his first semester, though, he thought to himself, “If I’m studying law, I might as well become a lawyer.”

To achieve that goal, Gibson knew he’d have to transfer to a four-year school, but he had questions about the process and whether all his credits would transfer along with him. Cost was a factor, too.

“I knew I could go to Sinclair and then I could transfer somewhere, but I wasn’t sure where I’d go,” he said. “I didn’t think I’d be able to afford to go to Dayton.”

That’s when he learned about the UD Sinclair Academy, a partnership between Sinclair and the University of Dayton. The program offers students a “seamless pathway” to study at Sinclair and graduate with a bachelor’s degree from UD.

“Students who are going to go to Sinclair are more likely to be local and stay local after they graduate,” Spina added. “There’s a real boost to the local economy that we expect to come from this, as well.”

Academy students can either apply to enroll at both Sinclair and the University of Dayton from day one, or they can do what Gibson did and transfer later.

Gibson started classes at UD earlier this term after three semesters at Sinclair. “I was so eager to get to UD that I actually enrolled a semester early in the spring, instead of the fall,” he said.

Now a junior, Gibson’s on pace to graduate from UD next year with a degree in political science, which is one of the 100 “pathway majors” offered to students in the Academy. Each major has its own customized class lists and course expectations for students while they’re at Sinclair.

Gibson worked with academic advisers on both campuses since he applied to the program. He called the process a “map to success.”

“The map made it super easy,” he said. “I knew what classes I needed to take and knew exactly what I’d need to do to get to UD and what to do once I got there.”

The Academy support team followed up with Gibson throughout his time at Sinclair. They talked about his academic progress and offered career advice. They even kept him in the loop about activities on UD’s campus.

Being a student isn’t only about what’s taking place in the classroom. The Academy aims to give its participants a true “UD college experience” while they’re taking classes at Sinclair, according to Spina.

Gibson and other Academy students get access to UD’s facilities like the library and can join student clubs or workout at the RecPlex, the school’s 125,000-square-foot recreation center. They can even perform in the marching band.

“UD would reach out and tell me if they were having events and invite me to campus so I could see what it was like to be a student there before making that big jump,” Gibson said. “It was pretty nice.”

Another program participant, Emily Kylin, described the Academy as making “many of my dreams come true.”

Kylin, who will graduate in December with an English degree, had always wanted to do an exchange program, and the Academy made it possible. 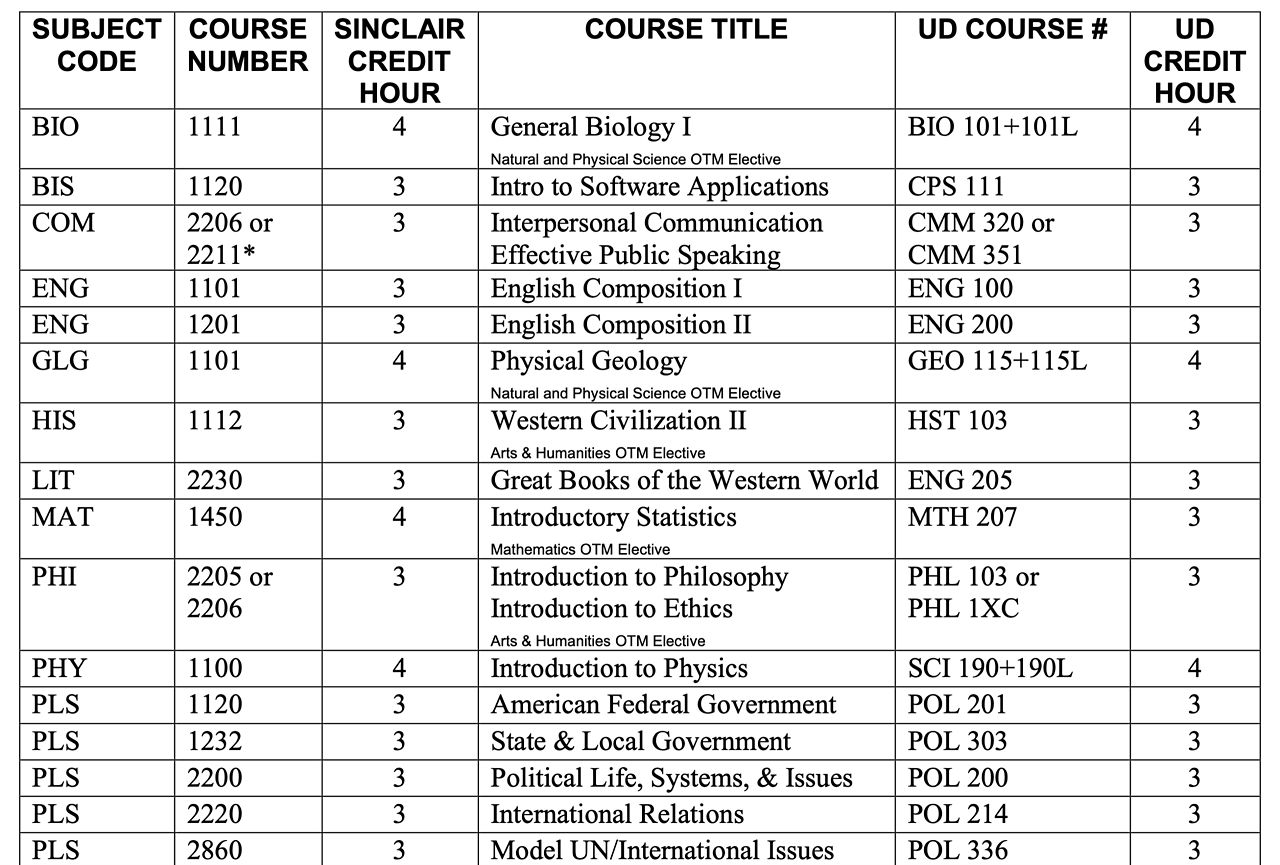 A sample of the academic 'road map' provided to students in the UD Sinclair Academy. This is part of the course list for a political science major.

Like many Academy students, Kylin pays for her own schooling. Financial constraints would have made some of her college dreams, like studying abroad, difficult. But the Academy put them within reach, she said.

As part of the Academy, students are eligible for financial aid and special scholarships. In fact, the school recently announced an anonymous $1.25 million gift to support Academy services and fund scholarships for Academy students with financial need.

The University of Dayton strives to be transparent about their four-year cost upfront with students. The students pay Sinclair rates while at Sinclair, but the rates get closer to “private institution rates” when they head to UD, Gibson said.

Gibson earned an Academy scholarship. While he still had to take out some college loans, the scholarship money and additional financial help through the program basically cut his tuition costs in half. He also gets a $500 scholarship for books each semester.

“Knowing I had a certain amount already covered as long as I could maintain my grades, it let me know I would always be OK,” he said.

Gibson’s not the first person in his family to attend college — his mother attended Sinclair for a time and his brother studied Automotive Technology there. But he’s the first in his immediate family to attend a university and hopefully complete a bachelor’s degree.

To help people like Gibson, UD recently announced plans to enhance the Academy through the creation of an initiative geared toward first-generation college students. It’s the result of a $1 million grant from Bloomberg Philanthropies and the Judy and Fred Wilpon Family Foundation.

The school plans to host an orientation program to build support networks once the first class arrives. They’ll also meet with the nine other Kessler schools — which include Brown University, University of North Carolina-Chapel Hill, Washington University in St. Louis and others — to take part in student engagement and networking opportunities.

Spina said the Academy is about two things: getting students to graduate and helping them become successful.

“Evidence shows that when lower-income students attend high-graduation colleges like the University of Dayton, they are more likely to graduate, and their lifetime earnings potential and opportunities increase,” Spina said.

As for Gibson, he’s already looking toward the future. He plans to study for the LSAT — the standardized test used for admission to law schools — this summer and then apply for law programs in the fall. UD is in the running.

“I’m going to study and keep my grades up,” he said, “and hopefully I’m going to get accepted into a great school.”