​Kiaaina dons a state-of-the-art virtual reality headset. The computer has several simulations, but this one requires Kiaaina to go on a spacewalk to make crucial repairs on the International Space Station.

She physically lunges forward and side-to-side with a set of joysticks to pick up and use a set of tools. It's her first time using the equipment since the lab officially opened a couple of weeks ago. She fumbles a bit at first, but the 13-year-old soon gets the hang of it. 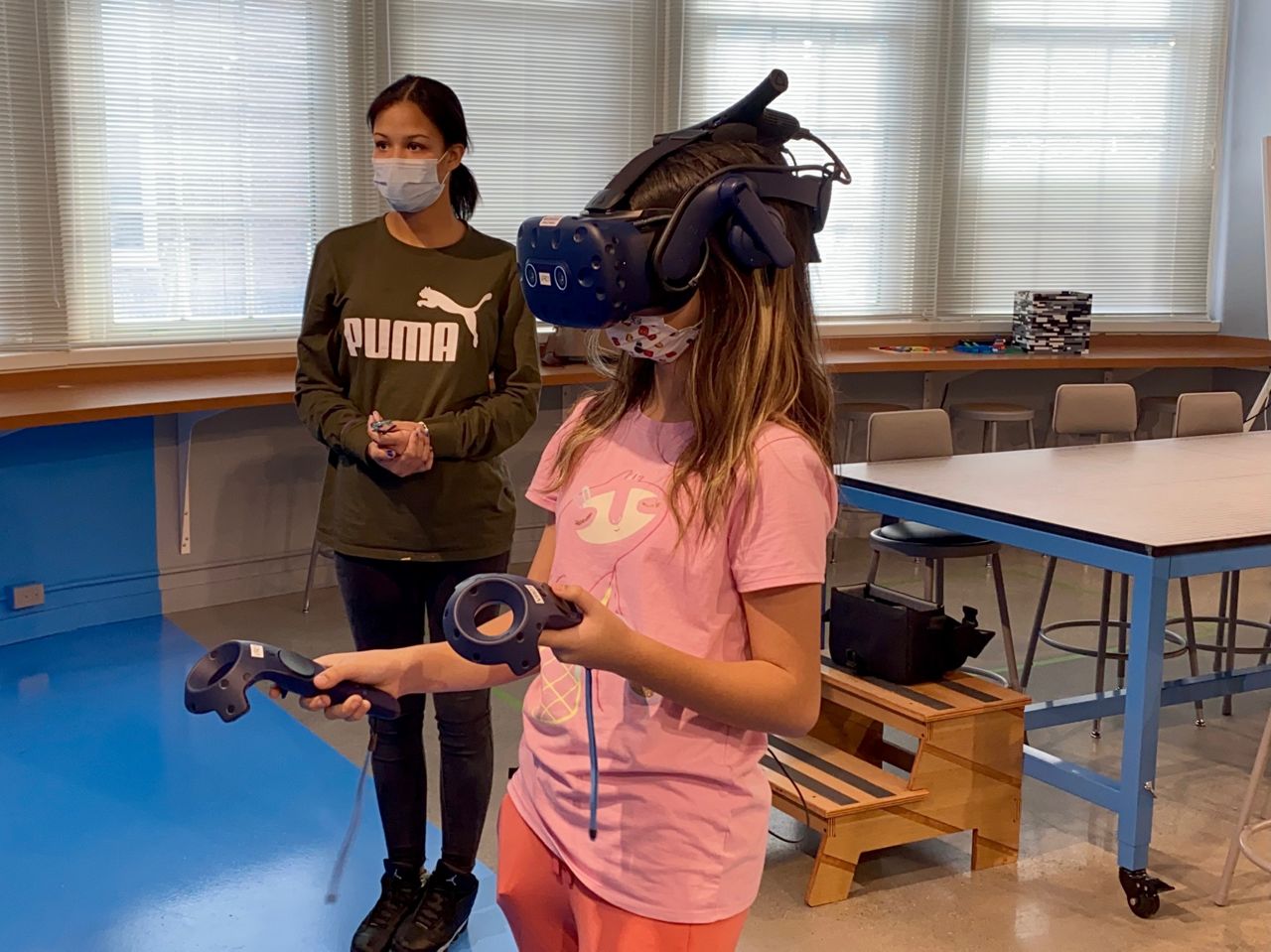 Brehm is a few feet away watching the action unfold on a massive monitor positioned on a bold blue wall at the front of the lab. After a few minutes, she shouts out instructions to help her friend.

"Reach up and grab the yellow bar. It's right in front of you," Brehm said, as she physically directed Kiaaina's right arm. "There you go. You've got it now!"

Brehm and Kiaaina are two of a few hundred kindergarten through eighth-grade students at the school who get to use the lab on a daily basis. They spend about an hour there every day, but it's also available for after-school clubs and programs.

A high-tech playground, the lab is full of all sorts of gadgets and gizmos provided as part of a multiple-year grant by Verizon and other partners.

The room includes circuit boards, six 3D printers, programmable remote control cars and robots, Legos and tons of spare parts. All items kids can use to come up with their own creations.

There are also a handful of high-powered computers that operate equipment used by students for everything from designing video games to programming mobile apps.

Through the use of augmented reality technology and 360 cameras in the room, students are able to create their own "immersive virtual worlds," according to Principal Jamie Sowders.

"They're not just playing games or doing an educational computer program. They're using their creativity and problem-solving skills to create their own worlds," Sowders said. "These are things they likely wouldn't have the chance to do or skills to develop without this space."

More than just fun and games

While it may seem like fun and games, Sowders said the tech will help the students develop important skills for in the classroom and in life — critical thinking and problem-solving skills, the importance of teamwork and creativity. 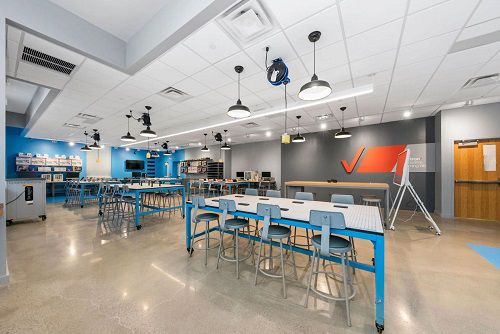 The curriculum is designed by The J. Orin Edson Entrepreneurship and Innovation Institute at Arizona State University. It's one of the leading innovation hubs and tech education centers in the United States.

Beyond the technology, the partnership also provided Sayler Park School with extensive professional development resources, including a full-time technology coach to help teachers integrate the tech into their lesson plans.

Sowders, who began his career as an English teacher, said it's great learning along with the students.

"Technology is changing every day. We're educating our students for jobs that don't yet exist," he said. "This partnership allows us to put tools and technology in the hands of our students that otherwise they probably wouldn't be able to access."

Both Brehm and Kiaaina said they like their math and science classes, but they love the hands-on learning that takes place in the Innovative Learning Lab.

"Instead of just reading or hearing about something, we can actually see it in action," Brehm said. "In the lab, we can see how it works, why it works, and then, if we can, also get it explained to us if we still need it."

"I’ve learned that there’s more to science than what’s in your textbook and some of the normal experiments we do," added Kiaaina. "We can now do things, like coding and robotics."

Sowders has been at Sayler Park School for eight years. For the 2018-19 school year, he introduced a project-based learning (PBL) model for the school. 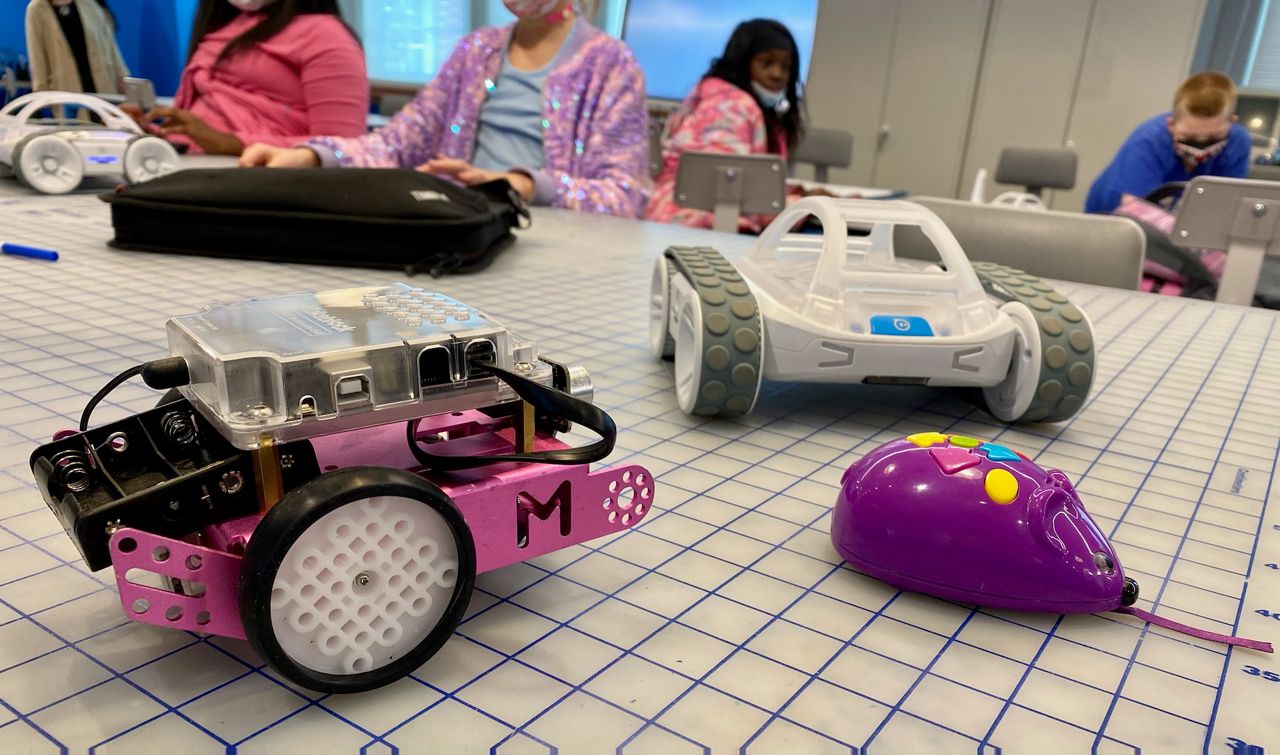 The PBL-style curriculum emphasizes interdisciplinary learning projects that have real-world applications. The method's proponents believe it enhances the likelihood that a student will understand and retain the skills and concepts they've learned.

An example is a current challenge for third-graders related to the concept of forms of energy. They're working to build robots from reusable materials and then power it using at least two energy elements. They’ll also add other electronic components that will allow the robot to perform specific functions.

Simone Bess, the lead teacher in the Innovative Learning Lab, said the tech available is robust and flexible enough to adjust the curriculum at all grade levels.

"We know that the earlier we can introduce a child to these concepts, the better they're going to be prepared for the future," Bess said. "Even if they don't choose to pursue a traditional STEM career, the problem-solving and critical thinking skills they're learning will help them throughout their entire lives."

Bess has a background in engineering and she loves being able to impart her passion for science, math and technology on kids.

"We get to have a lot of fun here," she said. "But for me, it's really special to be able to share my background with kids of all ages and to help get them excited about science. This is a great place to teach."

Sayler Park School’s relationship with Verizon started back in 2019. It coincided with Sowders’ desire to implement project-based learning.

While doing a sort of pilot program for PBL, Sowders found that many students weren't able to complete their projects. After talking to some of them, he realized a common issue was a lack of internet access outside of school.

Sowders estimated that 60-65% of the students then did not have internet access at home.

Sayler Park feels like a quiet small town located at the farthest point west in the city of Cincinnati.

He described Sayler Park as an "urban island"; somewhat isolated from the rest of the city. They lack some of the immediate amenities of other city neighborhoods and many of the residents are in need. 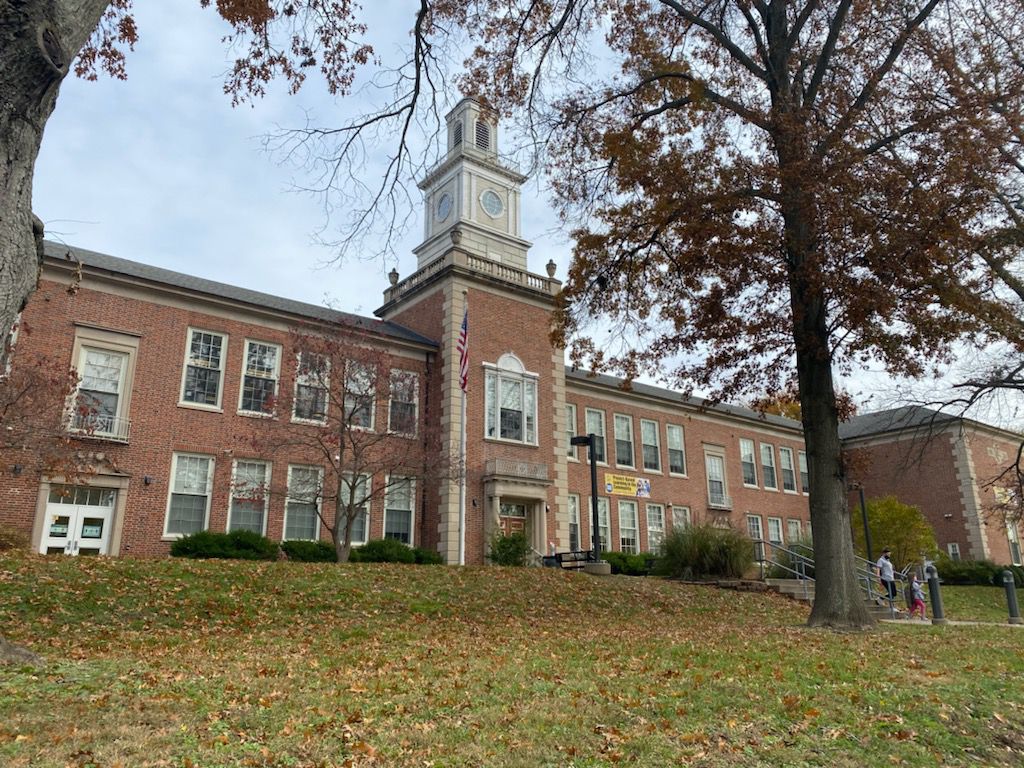 About 90% of Sayler Park School students are part of the free- and reduced-lunch program.

Sowders said the school is trying to work with other corporate partners on projects that can help not only the students, but the entire neighborhood.

As an example, Sowders cited the creation of a school-based health center at Sayler Park School by Mercy Health a few years ago.

"It's actually the only medical provider in Sayler Park for our students and our community," he said.

Sowders decided to apply for the Verizon Innovative Learning schools initiative. Its goal is to help under-resourced middle school students develop critical skills that put them on the path to success in an increasingly technology-dependent economy.

Sayler Park School was one of 50 schools across the nation selected to participate in the multi-year initiative. That first year, Verizon provided Sayler Park students in fifth through eighth grades with tablets and unlimited data plans.

"This partnership provided us with an opportunity to support our students and prepare them for the digital age and reading them," Sowders said. "It's about making sure they're not affected by the digital divide."

Verizon also brought 5G technology to the classroom. To do so, they installed a small cell tower outside the school, which also enhanced the strength of the WiFi throughout the community.

Eventually, the school will open the Verizon Innovative Technology Lab to the broader Sayler Park community several times a year.