CINCINNATI — Brittany Frey was one of the only females on her beer production team when she started in the brewing industry about four years ago.


She started her career in marketing and event planning in the wedding industry, but she was drawn to the beer world because of the creative elements involved — coming up with recipes and learning the ins and outs of the brewhouse. Frey also liked the science behind making beer and considered brewing a STEM (Science, Technology, Engineering and Mathematics) field in a lot of ways. 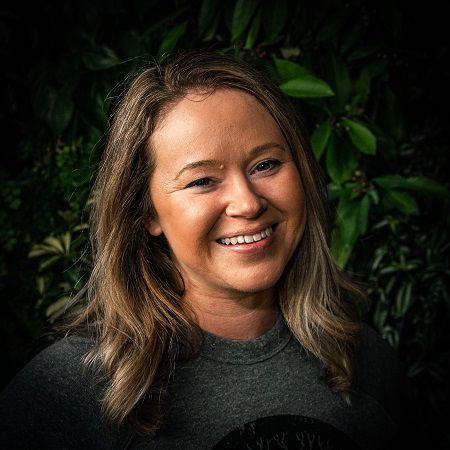 "I really like the passion behind brewing and the drive to connect with the community," she said. "No matter what size brewery you’re at, it always kinda comes back to connecting with your surrounding area."

Frey currently works at MadTree Brewing in Cincinnati's Oakley neighborhood. As production manager, she leads the planning and coordination of the entire brewing process.

She got her start in the beer business about four years ago at Swine City Brewing Co., a self-described neighborhood brewery and taproom in Fairfield, Ohio. She spent nearly two years there learning the ropes from several top brewers, almost of all of them men.

At the time, she was one of the only female employees involved in the actual beer-creation process. All the other women worked either as a bartender or server.

Frey's experience mirrors what you will see in most breweries and taprooms across the country.

Nationwide, the craft brewing industry is a predominantly white, male workforce. Roughly 37% of non-brewing production staff is comprised of women, according to data from Cincinnati State Technical and Community College. Only 10% are people of color.

For perspective, Ohio's 357 craft breweries created 8,300 jobs paying a combined $253.1 million in wages in 2020, according to a report from the Ohio Craft Brewers Association. The report says those jobs benefitted nearly 5,600 households.

In southwest Ohio, craft breweries employed about 1,600 individuals last year, per the report. Those numbers don’t include places like Dayton, Ohio or northern Kentucky.

"Frankly, we need to make sure there are more than just 35-year-old white guys with beards in the industry," said Carla Gesell-Streeter, chair of the Brewing Science Department at Cincinnati State. "We're working on that all the time."

Education as a way to increase access to opportunity

MadTree recently established a $5,000 scholarship for students in Cincinnati State’s Brewing Science degree and certificate programs, to promote and support increased diversity in the industry.

Rhiannon Hoeweler, MadTree's director of strategic impact, said helping to lessen the financial barrier for education will make it easier for more people to participate in the brewing industry.

"The more we diversify the brewing industry, the better we will make it,” Hoeweler said. “This scholarship is one way to invest in our beliefs and spark change.” 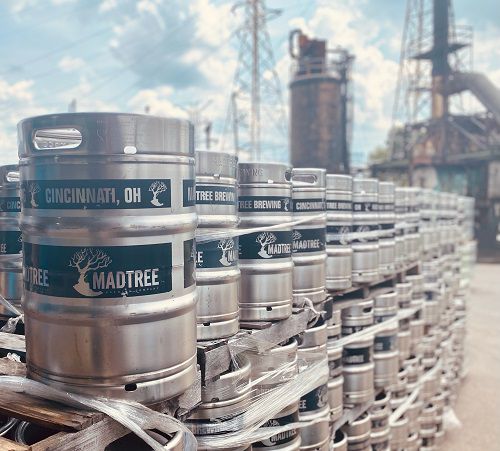 The funds cover about half of a student's education costs, she added.

Cincinnati State began offering brewing classes in 2015. The program now includes an Associate of Brewing Science degree, and two certificates: The Brewing Sales and Marketing Certificate; and the Brewing and Beverage Laboratory Certificate.

Students use MadTree's sensory lab for classes on things like quality assurance. Some MadTree staff, including head brewer Ryan Blevins, either teach classes or sit on the boards associated with the program. That also includes Becca Ransohoff, master of chemistry.

The program has about 60 students, nearly 25% of whom are women, according to Gesell-Streeter. Graduates have gone on to work at more than 20 regional craft beer employers, she said.

Frey is one of the first graduates. Her classmate, Danielle Sickmiller was one of MadTree's first interns in 2018. She spent that summer gaining hands-on experience working with the brewery’s production team.

"We've had more women graduates of our program go on to work at MadTree than we've had male," Gesell-Streeter said. "We look forward to continuing our partnerships and making more opportunities, for more people, industry-wide."

Masters of their craft (beer)

The beer industry involves a lot more than just picking out hops and making beer.

Cincinnati State's program covers every aspect of the brewery business. Depending on a student's track, they study everything from chemistry to accounting to graphic design. Social media management is a big subject in the program, Gesell-Streeter said.

"A lot of our students are coming to the beer industry from fields like marketing or the sciences," she said. "So, they've already completed their undergraduate or graduate work, but they're going through our program to cater specifically to a brewery setting." 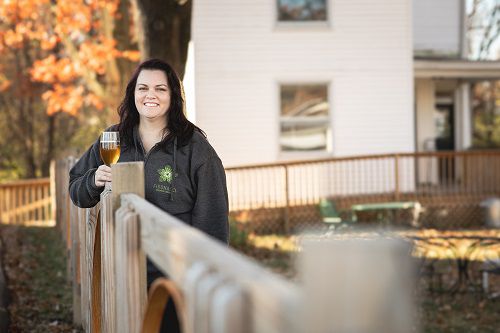 She gave an example of a chemist who will work in a product testing lab.

Betty Bollas doesn't have a science background, but she understands what all that goes into making a brewery work. She’s president and co-owner of a nanobrewery in Mt. Healthy called Fibonacci Brewing Co.

A typical day for Bollas includes anything from running the taproom, to feeding the chickens and goats on the property's urban farm, to checking in guests at their on-site short-term rental property.

She's also in charge of all the finances, including procurement of the local products they use to make the beer. Fibonacci tries to use at least one locally sourced product in each beer they brew, Bollas said.

Bollas entered the field because her husband, Bob, was a passionate home brewer and she told him to consider opening his own brewery.

Other area breweries — Mount Carmel Brewing Co. and Streetside Brewery in the East End, for example — have similar origin stories in that they were founded as family businesses.

The majority of Fibonacci's staff are women, and all work in front of the house or on the business side of things.

“Having people coming from different backgrounds, different perspectives helps round out the business and create the best business model to serve all of your potential customers," Bollas said.

In many cases, people don't grow up drinking craft beer. Making the beer industry more inclusive as a place to work will make it more accessible, as well. 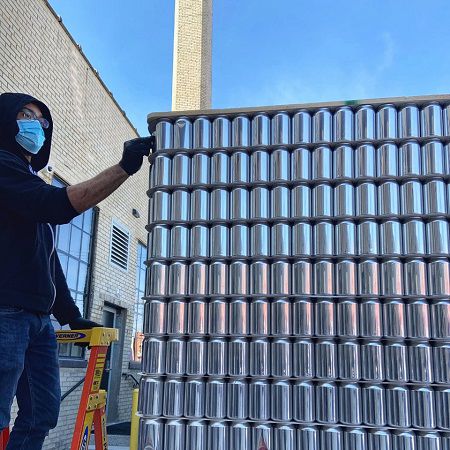 “If your staff can start reflecting a broader and more diverse community, you can start reaching a wider audience,” Hoeweler said. "When you get down to the nuts and bolts of it, if we can grow our audience, we can sell more beer and grow our impact."

The idea of making beer more inclusive is one of the core values behind Esoteric Brewing in Walnut Hills. When the company officially started production last October, Esoteric became one of only five Black-owned breweries in the state of Ohio.

"Our whole ethos is to create a space that is welcoming for all, not only by just the look and feel of it but also our offerings and our staffing and how we treat people — it’s kind of all encompassing,” said Brian Jackson, co-owner and head brewer at Esoteric.

Like Frey, Jackson never set out to be a brewer. He went to the University of Cincinnati with dreams of becoming a forensic psychologist, but he ended up pursuing business instead.

Jackson knew he loved science and wanted to work with his hands, but he never considered beer as a career path. Not because he didn’t think he’d like it; he just didn’t know it was an option.

About 13 years ago, a friend gave Jackson a Two Hearted Ale by Michigan-based Bell’s Brewery. That changed everything, he said.

"It was an 'Ah-ha' moment in my career, for sure," said Jackson. 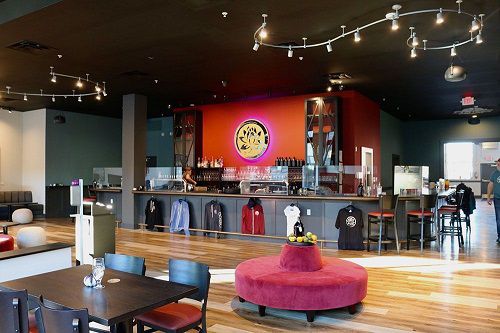 The 'brewlounge' at Esoteric Brewing (Provided)

He started homebrewing and then worked his way up the ranks. Before opening Esoteric, he served as a brewer at MadTree for four years.

Jackson co-founded his businesses with Marvin Abrinica, who is Filipino American. They chose to crowdfund the project with Wunderfund, a company run by Abrinica. They saw it as a way to open the space as a way to “get the community involved” and actually have residents earn equity in the building.

Patrick Klesmith was recruited as a partner to help launch the brewery. He’s an engineer and upon learning about the Esoteric team’s mission, Klesmith, who is a white male, decided to buy into the project, literally and figuratively.

“I fell in love with what they were trying to do and wanted to be a part of it,” said Klesmith, who is now the brewery’s chief operating officer. "Having so many different backgrounds and degrees of understanding and perspective, it just, in my opinion, builds a better company.”

Klesmith said Esoteric is unique in a lot of ways — how it does business, who it employs, even the design and feel of the brewery itself. They call their taproom a “brewlounge” because it looks more like a dance club or swanky bar.

Cultural expectations have hampered the brewing industry's ability to attract diverse talent and grow their customer base, Klesmith said.

It's not intentional or malicious, but the perceptions may “send a message of a certain kind" to potential employees and customers, he added.

“When we talk about building a more diverse and inclusive industry, you can't just snap your fingers and make the numbers happen. Otherwise, they’re just numbers," Klesmith said. "You have to build a culture and a community within your space so that everyone feels comfortable going there and working there. That’s what we’ve tried to do and that’s what I think we’ve done.”