CINCINNATI — When Tyla Thompson and her fellow University of Cincinnati graduates walk across the stage at Fifth Third Arena on Saturday, it will mark the end of a significant chapter in their lives. They will just be doing it a year later than expected.

Thompson, 24, was part of the Class of 2020. She graduated with a degree in liberal arts, with minors in minority health, sociology and early childhood education. She will be one of nearly 1,400 students from that class who will get a chance to walk at commencement on Saturday.

"Oh goodness, I'm so happy," said Thompson. "I wasn't sure this day would ever happen." 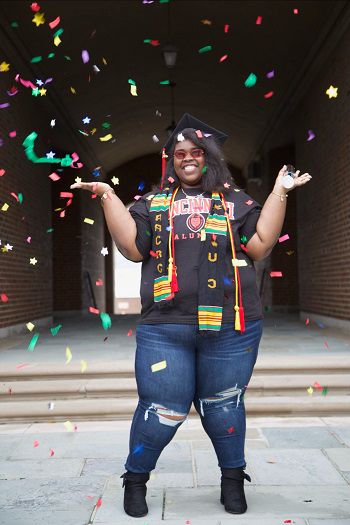 Tyla Thompson, a graduate of UC in 2020, poses for a senior photo. (Provided)

When she graduated last December, Thompson did the typical things expected of the milestone: She got her diploma, she celebrated with family, she took photos in her cap and gown.

Next came the search for the job that would allow her to showcase the skills and knowledge she gained over the past year at UC. Thompson said she’d like to go into education, perhaps working as a school guidance counselor.

Despite those markers of graduation, Thompson said it doesn’t even feel like it ever happened. The university canceled the in-person commencement for her class and several subsequent graduation classes due to COVID-19 and related health mandates.

“It just feels incomplete. I mean, I know I’m done, and I understand I’m done, but it doesn’t feel that way,” she said.

It was going to be a big celebration for Thompson's family. She's the first person in her immediate family to graduate from a four-year college.

UC offered an online ceremony to give the Class of 2020 something to remember. It featured all the hallmarks of a commencement — speakers, music, the name of all the graduates being read. 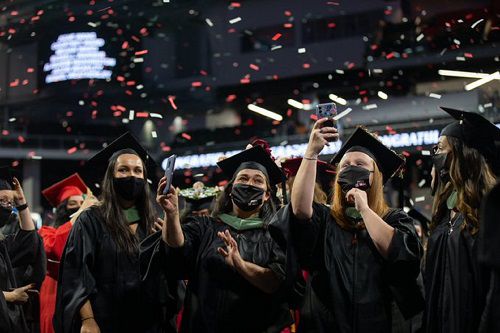 Thompson felt proud when she saw her name flash on the screen but it just "wasn't the same."

"I didn't get to shake anyone’s hand or celebrate with friends. I didn’t even get handed my degree. They sent us a digital copy of our degree instead," she said.

During the past 18 months, people around the world have been isolated and events were canceled to slow the spread of the pandemic. While doing so saved countless lives, it also robbed millions of people of important rites of passage that they may never get to experience.

Proms, weddings, sporting events, religious services and even funerals had to be canceled canceled – graduations, too. Thompson was working as a contractor in the health program at her alma mater, Hughes High School, when everything started to lock down.

She remembers walking the halls at Hughes, which is feet from UC's main campus, daydreaming about graduation and prom. Those memories made it even more difficult to see her students end their high school career the way it did, she said.

Thompson recalled one student who went all the way to Chicago to buy a prom dress she never got to wear.

"I was so sad for them. I remember how excited I was to graduate and go to prom. I promised them I wouldn't miss their graduation for the world -- and it never happened," she said. "No prom, no graduation, some didn’t even get to say their goodbyes inside their high school."

To some, the cancelation of an event, like a graduation ceremony or a prom, may feel minor considering all that's been going on in the world during the past two years. But these events mark the completion of a significant journey or a transition point in a person's life. They create lasting memories.

"We are symbolic beings; we derive meaning from actions that are symbolic," Maribel Alvarez, an associate research professor in the School of Anthropology at the University of Arizona. "Yes, of course, we will be OK without a graduation ceremony. But will it add to the (psychological) burden that we're carrying in this moment to not have that moment of celebration? Yes.” 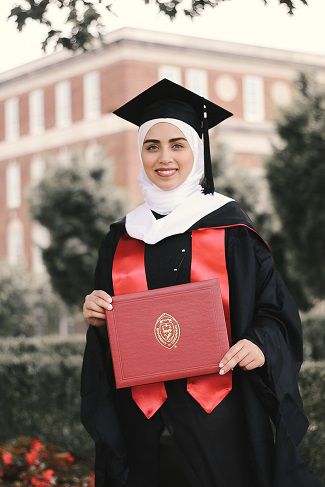 Mariam Elgafy can relate to the significance of graduation. The Dayton, Ohio, native was one of 2,079 UC students in the class of 2021 to graduate Friday.

"Over the course of a program, you’ve all persevered so much, so being able to have that moment together is so special,”said Elgafy, who earned her Master of Arts in communications. “It’s wonderful to be able to be there and support your friends, knowing the struggles we’ve all been through. Making it to this point was truly an accomplishment for so many of us."

Elgafy said graduation is a chance to say, Thank you" to the administrators, faculty and fellow students who've played a role in their academic success. That experience takes on new meaning this year given that so many people haven't seen each in person in quite some time due to the pandemic.

Many people are still being cautious and some likely chose not to attend. UC is live streaming the events for anyone who'd rather participate from a distance.

While Elgafy and her classmates had the chance to walk at their graduation, they faced their own fair share of challenges during the pandemic. From lockdowns, to remote learning, to a whole series of unknowns.

She recalled a classmate, an international student, who didn't come back after heading home to Greece when UC briefly shut down last year.

“That’s what makes the class of 2021 unique. We started off in person, getting familiar with campus and students. Fast-forward a few months, and everything changes, but we are resilient and we made it through the past year-and-a-half however we could," she said.

Elgafy said Thompson and the class of 2020 understand resilience as well as anyone.

"They deserve to experience this moment. Graduation is a huge accomplishment for them and their families," she said. "They've endured so much over the course of their respective programs. Knowing they're going to be able to say, 'We did it” and celebrate together in person is beyond heartwarming." 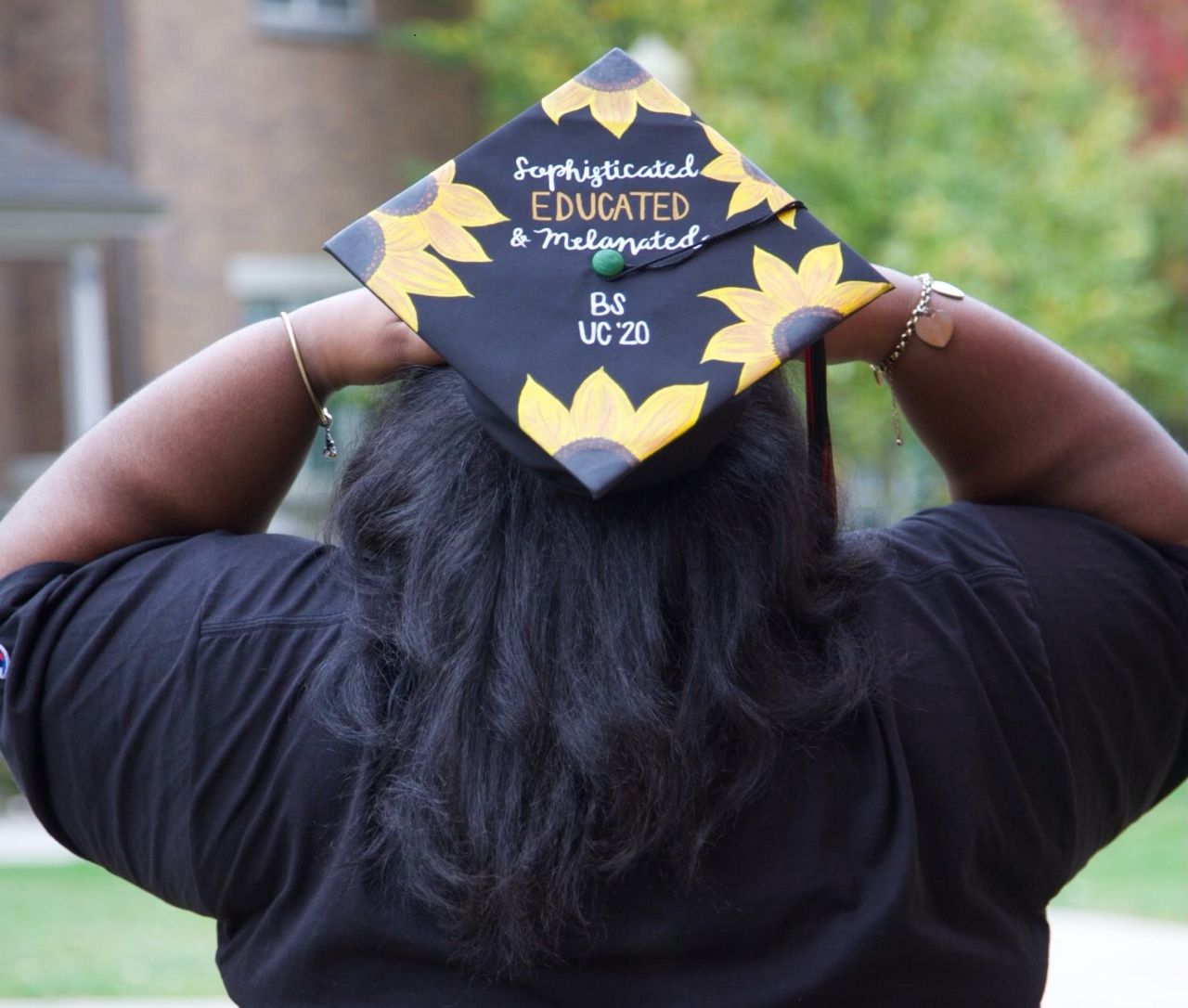 The back of Tyla Thompson's graduation cap.

Thompson worked at daycare center to put herself through college while taking on a full course load.

“I was in class from August 2019 to December 2020, while working, without a break. I took 18 credit hours to graduate my last semester. There were times I felt like I couldn’t do it anymore,” she said. "I worked my butt off."

Saturday will be especially meaningful given all she’s been through in her life. Her mother suffered a fatal heart attack when she was 9. Her father, Donald Hill, raised her and her five brothers and sisters.

“I’m beyond proud of her,” Hill said. “She is showing me she’s got what it takes to succeed. She doesn’t let obstacles get in her way. Her mom would be very proud.”

Thompson said she learned in June that she’d have the opportunity to walk this summer. But given all the time that had passed and where she was in her life, she didn't want to take part. She credits her brother, Ace, with convincing her to go through with it.

“It felt like it was kind of late for me. It had been eight months and I asked myself if it was even worth it at this point,” she said. “But then my brother told me that I had earned this and told me, ‘Go get everything owed to you.’ He was right and that’s why I’m going to do it."

Thompson said she's had her cap and gown decorated and ready to go since last year. She's glad to have the chance to wear it when it counts.