About 12 years ago, Irvine, 82, learned the Summit County Beekeepers Assoc. was holding a meeting near his home in Cuyahoga Falls, so he attended, he said. He bought a raffle ticket.

“The first ticket they pulled out was mine,” Irvine said. When he got home, his wife, Becky, asked what he planned to do now.

Irvine was interested in bees because of a book his brother bought his dad on bees, although neither man read it, he said. Irvine read it, and he took a beekeeping class.

Each bee package contains 10,000 bees and a queen from Georgia, said Emily Mueller, who operates Mueller Honey Bee with her husband, Ryan. She is also a member of Summit County Beekeepers and teaches bee-related classes through the group.

With a steady stream of new and experienced beekeepers arriving to pick up bee packages this month, the Muellers will distribute about 500,000 honey bees, she said, along with a few extra queen bees.

Each bee costs about a half cent, but the queen is worth $35, said Irvine, who is now a trustee of the Summit County Beekeepers. Each package of bees weighs three pounds.

Hybrid Italian bees are gentler than other bee breeds, he said, although they all sting. Africanized bees, now in the South, are making their way north and are more aggressive.

Irvine gets stung a few times each season, he said, although he admits he doesn’t wear a full beekeeper suit — he just dons long gloves and a hat with netting over his face. Like most people, he builds a tolerance to stings working with bees, although that tolerance can disappear over the winter.

Since winning his first bees, Irvine has kept only two hives on his small residential property, mainly to keep a comfort level for his neighbors, several of whom have children, he said.

Irvine doesn’t sell his honey — he happily gives it away, he said, to neighbors and to people he used to work with at Weaver Industries, a retired group he meets up with regularly, he said.

And he always knows when they would like another jar of honey. 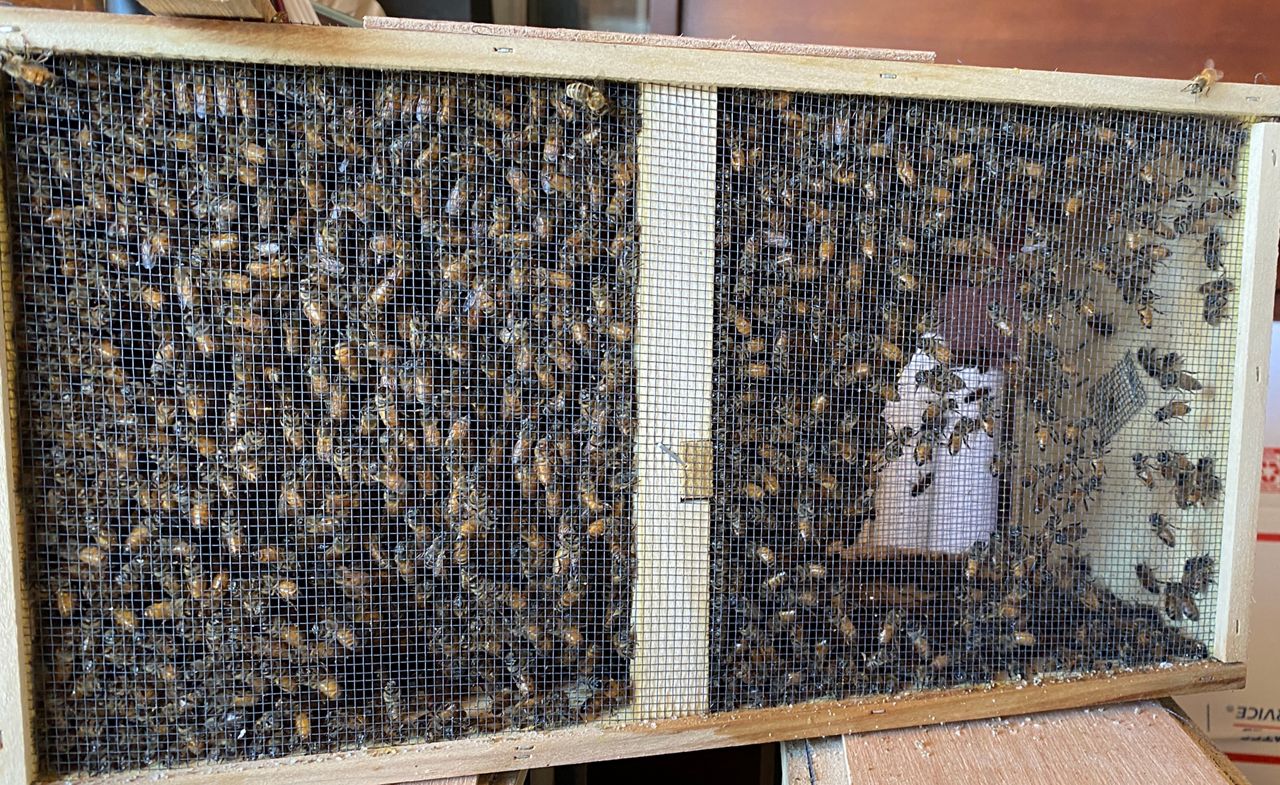 “They bring their empty bottle and ask me if I want it back,” he said, smiling.

Irvine also maintains two hives at Camp Mantatoc Boy Scout Reservation in Summit County. The hives at the scout camp died over the winter, so the bees he bought from the Muellers are to replace them.

“I've purchased bees from at least five different organizations,” he said. “When Emily told me she was selling bees, and she's a member of the club, I decided to come here. I'd rather come here and purchase from a local person who knows her stuff.”

Irvine uses as few chemicals as he can, he said, but some are needed to ward off parasites, which are among the top threats to bee colonies.

“They used to think [parasites] just infected bees with viruses. But now they realize it actually sucks the fat out of the bees and the bees need fat to survive winter,” Mueller said. “They can’t lay eggs, so whatever size they are when they go into winter is it. So they will just slowly kind of die off.”

Mueller has been known locally as “the bee whisperer” since 2017 when she was called to remove a swarm of bees from Akron City Hospital. She drew attention because she was pregnant, and wearing flip-flops with no gloves or protective gear, so photos of the effortless removal made the rounds on social media. 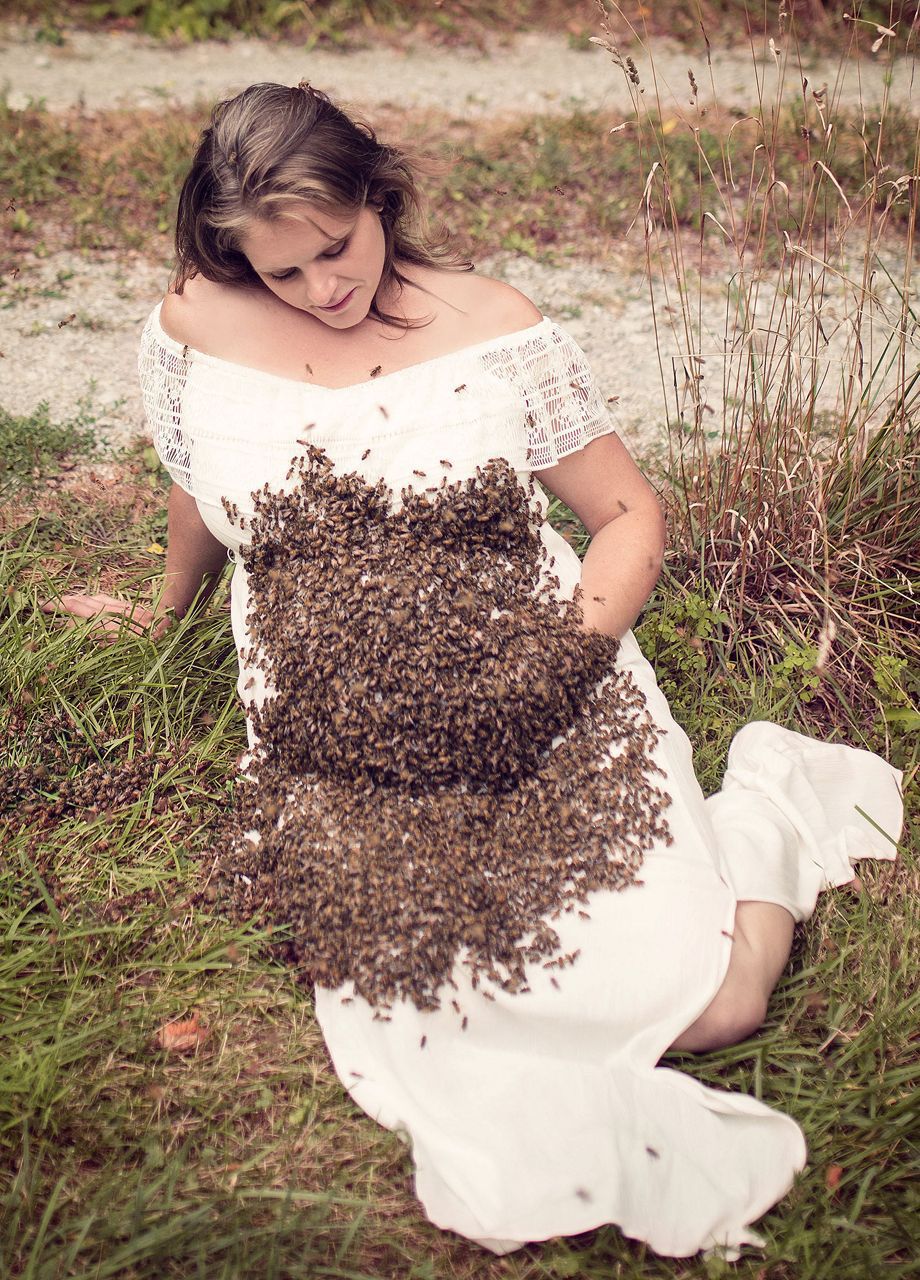 But Mueller has plenty of experience with all facets of bees. The Mueller Bee Company is part bee-related retail store, with honey and other natural foods, and has been a swarm and hive removal business for nearly a decade.

Swarm season will begin soon, Mueller said, running from mid-April and through May.  Swarms are free-flying colonies of bees usually found hanging from trees.

Hive removal often requires a “cut-out,” which is when the hive and comb have to be cut out of a wall or other structure, she said.

During either type of removal, the Muellers’ aim is to keep the bees alive and well, she said.

“It's always better to call a beekeeper because they can put them in a hive, whereas if they go dancing around the city, somebody is going to end up killing them eventually,” she said.

Mueller said she keeps a list of swarm-removal companies in her contacts list, organized by city, so she can refer them as needed.

“I probably refer 100 swarms out every year,” she said.

Besides the classes she teaches for Summit County Beekeepers, Mueller also works to educate the community’s kids, taking bee education into daycares, schools and libraries.