By Jennifer Conn Ohio
SHARE
AKRON, Ohio — Emily Mueller, known in northeast Ohio as the “Bee Whisperer,” has released a photo from her annual, honey bee-inspired shoot — this year laughing at herself.

In the photo, Mueller and her husband, Ryan Mueller, are impersonating Cheech & Chong, the comedians known as the gurus of ganja since the 1970s.


In the photo, with Ryan Mueller in the driver’s seat peering through a window gauchely framed in tassels, Emily Mueller is depicted as Chong, with a beard made up of thousands of honey bees, rendering her unrecognizable.

Friends who look forward to the Muellers’ photo sessions each year think the photos are hilarious. 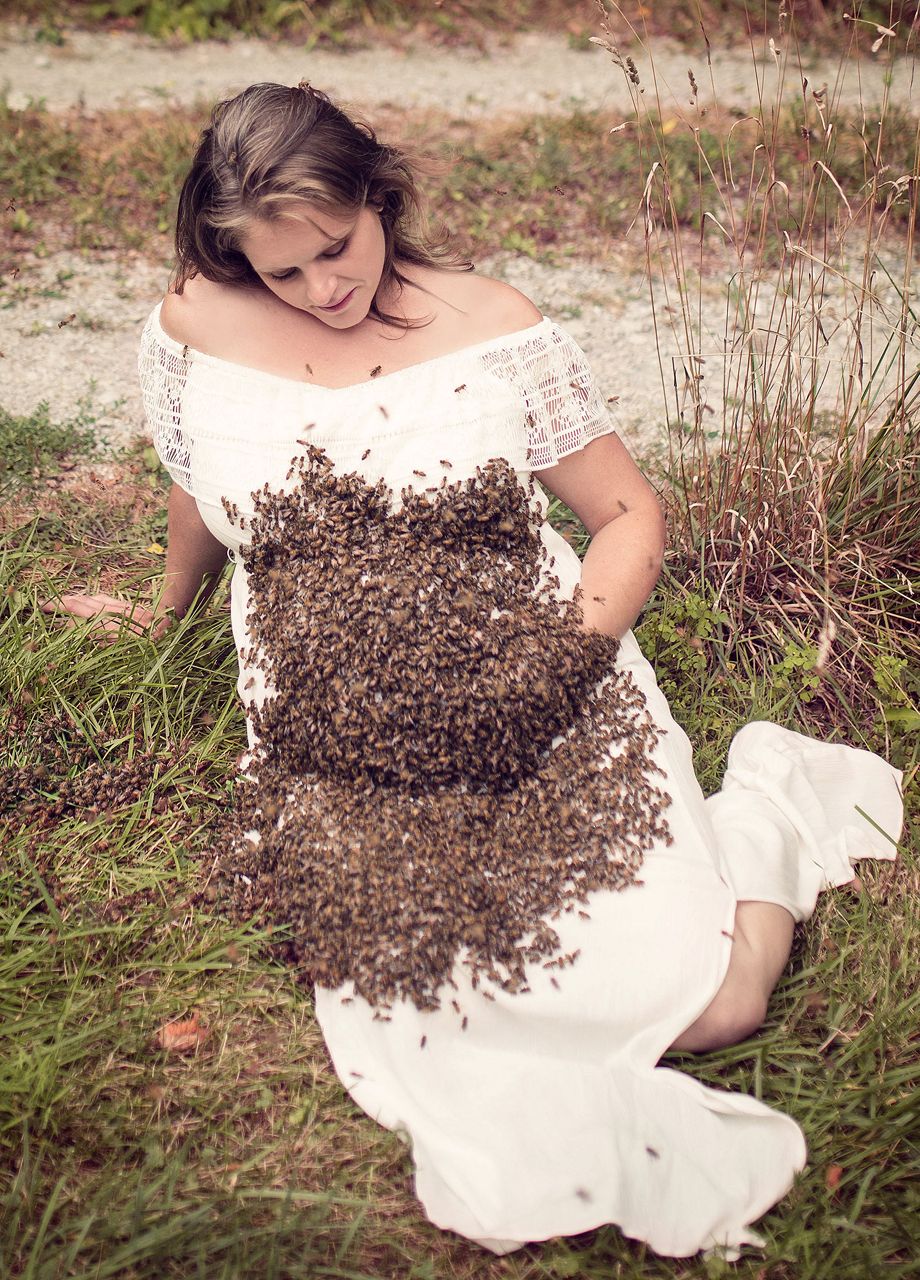 “Some people are just like, ‘You are not right, you’ve lost your mind,’” she said. “Someone else told me that I have topped myself yet again.”

The couple chose Cheech & Chong for comic relief, she said.

“I think it's awesome that Cheech & Chong speak their truth. They don't care that they're crazy potheads on TV,” she said. "They just own it and I think that's awesome.”

The photos represent the Muellers living their truth as well, she said.

Emily and Ryan Mueller own the Mueller Honey Bee Company based in New Franklin, Ohio. 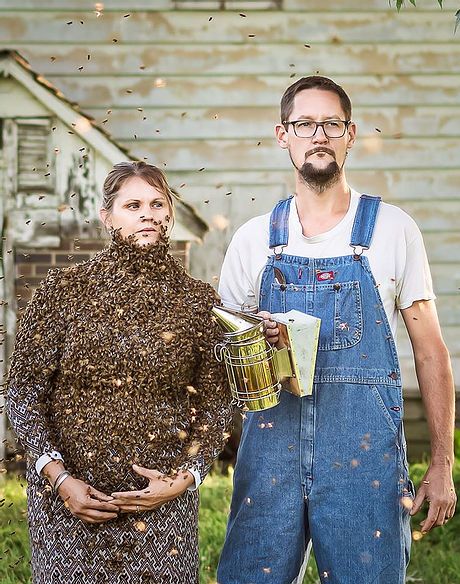 The Muellers are working to raise awareness about the importance of honey bees in the ecosystem and the medical benefits they offer.

This past year, Emily Mueller hosted workshops for home-schooled children to learn about bees by letting the students see the behavior of honey bee swarms up close.

Choosing the aging hippies for this year’s photo theme was also a way to bring fun back into their lives, Emily Mueller said, after the couple’s fourth child, Emersyn, was stillborn in 2017.

That pregnancy sparked the annual photo shoots, she said.

That year, Emily Mueller, about 6-months pregnant with Emersyn, sat for a shoot covered in a swarm of about 20,0000 bees, with most on her belly, for the joy of celebrating her family and her pregnancy, she said.

Her friend, photographer Kendrah Damis, who does the shoots each year, also captured a touching frame of Ryan Mueller helping Emily Mueller apply the bees by gently handing her the queen, which the drones naturally follow. The photos went viral, and the Muellers appeared in publications across the country.

Tragically, Emersyn was stillborn a few months later. To honor their son’s memory, Emily and Ryan Mueller have posed for elaborate bee-inspired photos ever since. 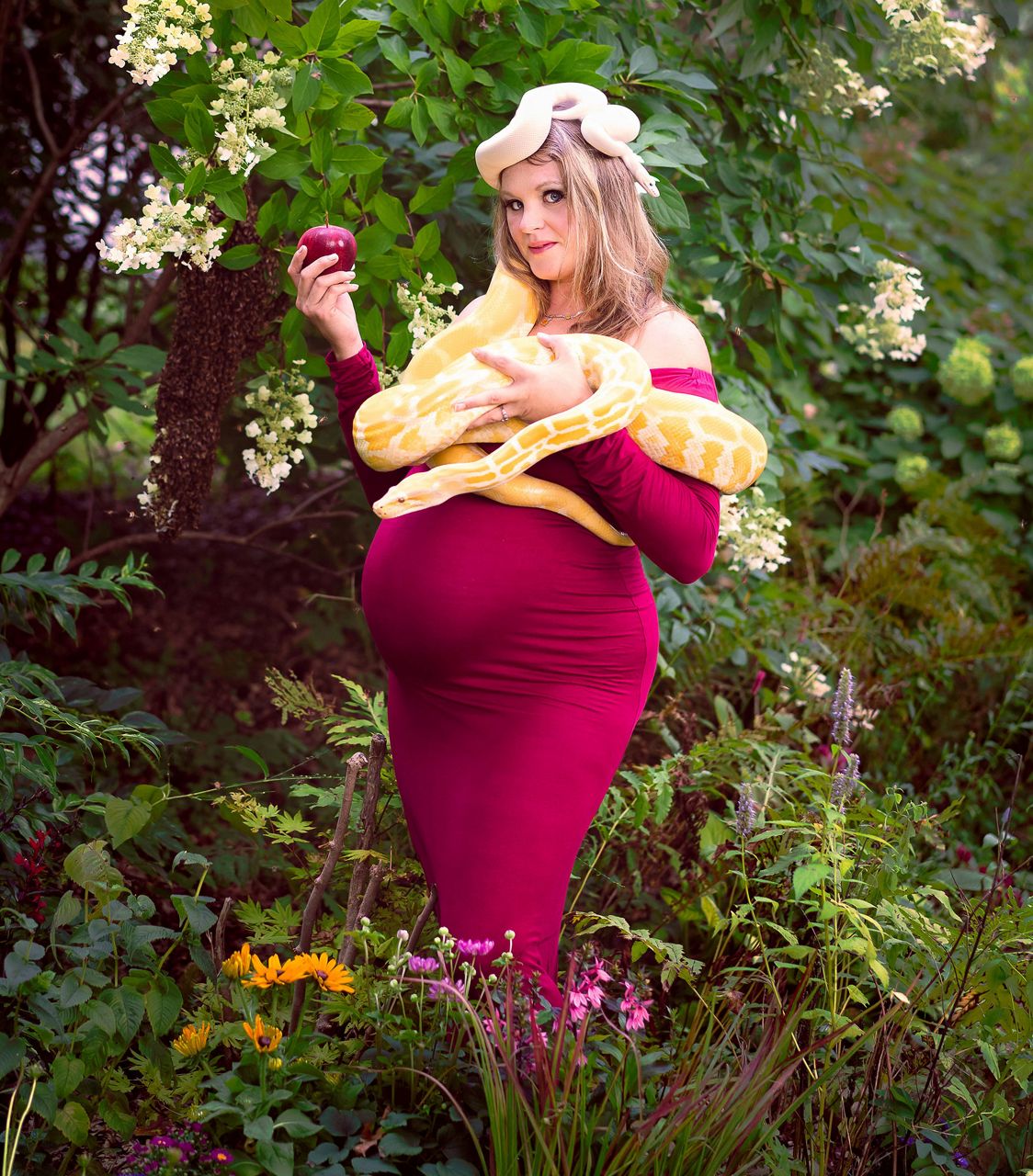 The following year, the Muellers paid tribute to Egyptian goddesses, painting bee-covered Emily Mueller in gold, while another shot has her wrapped in a large yellow snake.

Another year, the couple remade their version of the painting “American Gothic,” with the couple looking austerely into the distance, promoting their elderberry syrup, with Emily Mueller covered in bees.

Last year, the Muellers, with a group of acrobatic friends, recreated a circus scene with Ryan blowing fire and Emily as the bee-bearded lady. The shoot was inspired by a glitzy dress Emily Mueller happened upon in a thrift shop that reminded her of Keala Settle in “The Greatest Showman,” which told the story of PT Barnum.

This year’s shoot, with its comedic theme, is the first time the couple has opted for straight humor, she said.

Emily Mueller also has made a conscious decision to work at having fun again, she said, and when the opportunity arose to use a friend’s vehicle for the shoot, the Muellers couldn’t resist impersonating Cheech & Chong. 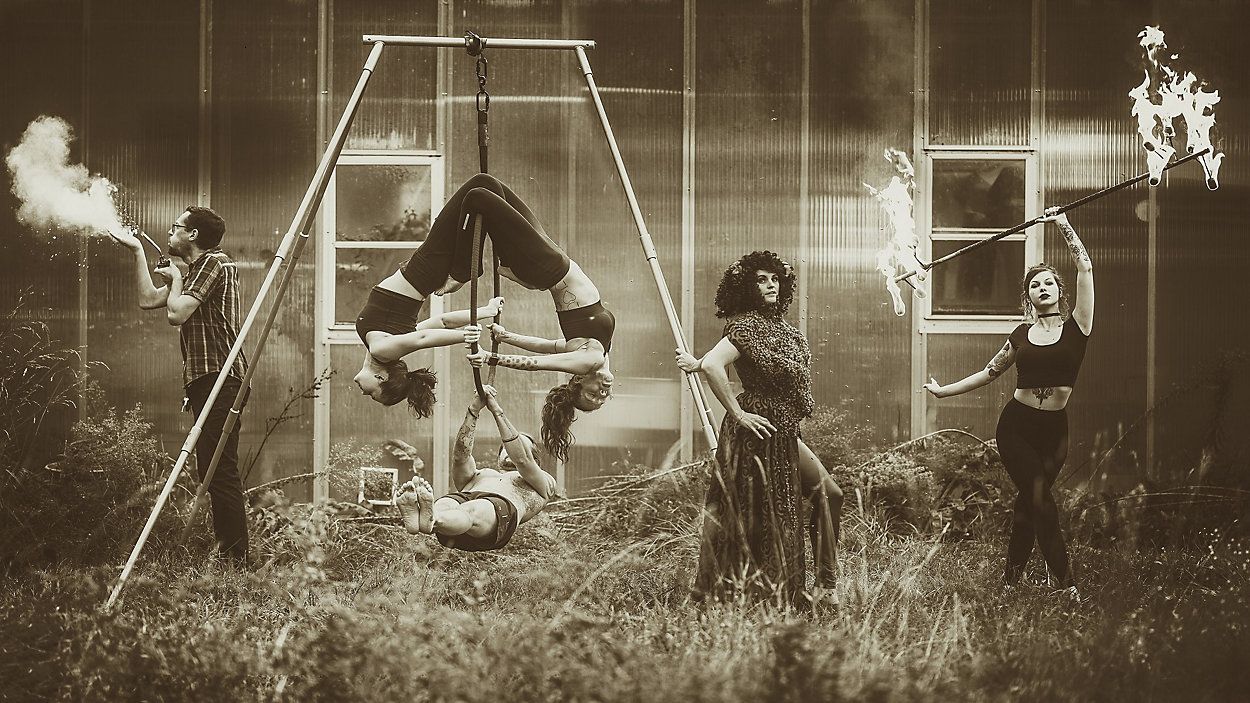 The Muellers and friends recreate an early promotional shot for a circus. (Courtesy of Kendrah Damis Photography)

“After a child dies, it's really hard to continue living and not have guilt,” she said. “Because you think every time you smile, every time you laugh, it's like you're okay with being alive and somebody that you wish was here is not. So this year, and starting in January like my own little resolution to myself, I'm going to start healing from this pain.”

Emily Mueller first caught the attention of the broader community in early 2017, when she was called to remove a swarm of about 40,000 honey bees at a building on the Summa Health System Campus.

Summa electrical engineer Dave Kibler had experience with bees, knew the insects had to be moved, not killed, so he called Mueller Honey Bee.

She showed up wearing shorts and flip-flops, and while calmly performing the extraction, explained to onlookers what she was doing and talked about bee behavior. Her efforts were captured on video and in numerous photos, which made the rounds on social media and earned Emily Muller the title “Bee Whisperer.”