David Danielson, executive chef for Levy at Churchill Downs, says he has the best job any chef could have. (Brandon Roberts/Spectrum News 1 KY)

LOUISVILLE – Jimmy Buffett wrote a song titled “I have found me a home” as an ode to Key West, Florida. If David Danielson, executive chef for Levy at Churchill Downs, were to write a similar tune, it would be about Louisville.


“I was interested in this job, and I came down here and saw Churchill Downs and everything that was going on here and around Louisville, and I thought, ‘OK. I’ll do it,’” said Danielson, 55, originally from Chicago. “I thought I’d be here for three or four years, and then move onto something else. But, I fell in love with Louisville, with Churchill Downs and with the Kentucky Derby. Ten years later, here I am, and I still love every second of it.” 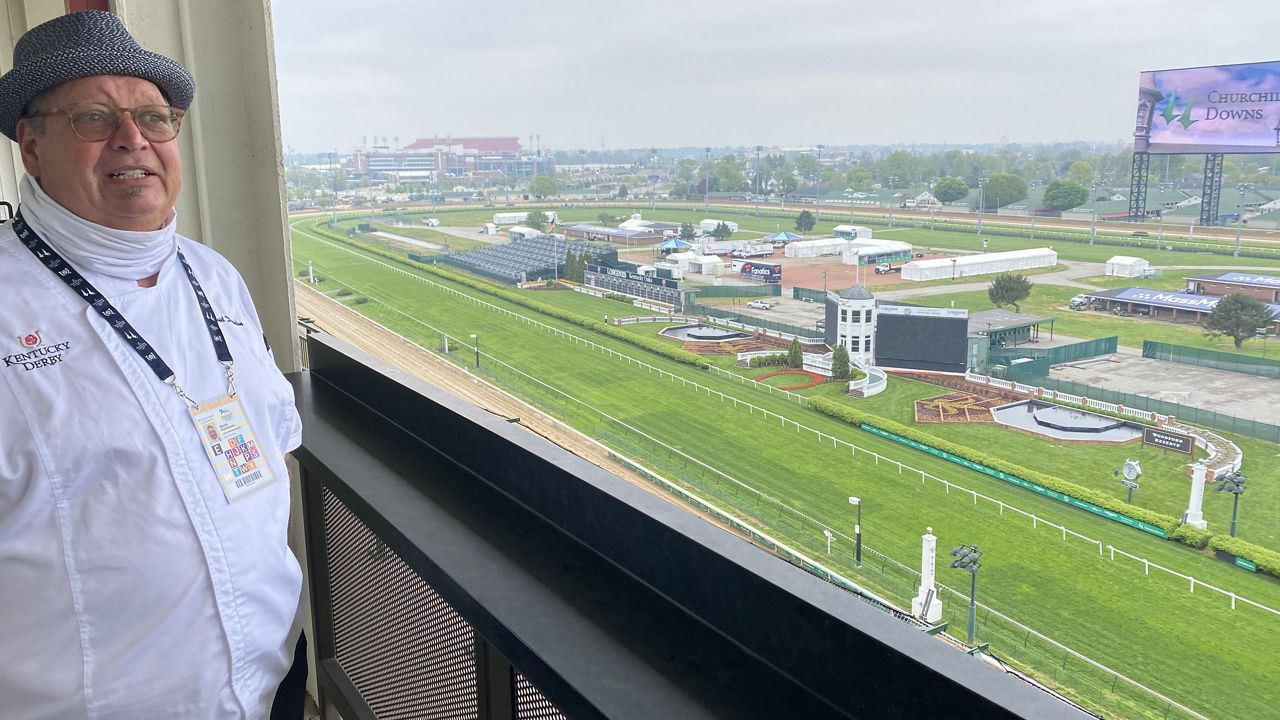 David Danielson, executive chef for Levy at Churchill Downs, talks about the reasons he loves his job on the balcony outside Matt Winn's Steakhouse. (Brandon Roberts/Spectrum News 1 KY)

Danielson has decades of hands-on experience in the hospitality industry. His culinary career began at Dumas Pere School of French Cooking in Chicago and later continued at the well-known hotel school Ecole Hotelier Tain l’ Hermitage in France.

Over the next two decades, Danielson continued developing his craft, working alongside some of the industry’s more renowned chefs in North America, Europe, the Caribbean, Asia and South America.

Before joining the team at Churchill Downs, Danielson worked as executive chef at Rockefeller Center New York with Restaurant Associates, was executive chef of the United Nations Plaza Hotel in New York City and The Palmer House Hilton Chicago.

As a result of Danielson’s non-culinary experience in budget writing, cost of goods utilization, labor-management and forecasting, inventory controls and waste reduction measures, he has overseen the operations of several multimillion-dollar operations throughout his career and said he had garnered a deep understanding of how to manage the variable cost aspects of daily operations of a food service establishment.

He has consulted on several large-scale special events throughout the world, including Super Bowl XLV in 2011, the U.S. Open tennis tournament, the 2016 Summer Olympics in Rio de Janeiro, the 2014 Winter Olympics in Sochi, Russia, the 2010 Winter Olympics in Vancouver, the 2008 Summer Olympics in Beijing, the Chicago Gourmet and Lollapalooza. Danielson has also worked as the executive chef at the Chicago Ritz Carlton and Charlie Trotter's, was personal chef to the British Consulate-General, and has lent his culinary expertise to PGA Tour events and the Grammy Awards.

Danielson started working at Churchill Downs in 2011, managing all food and beverage operations for Levy, the track’s hospitality partner. As executive chef, Danielson is in charge of all aspects of the planning and execution of the Kentucky Derby and daily operations and special events at Churchill Downs.

“About 10 years ago, Churchill really wanted to change their food and beverage program – to kind of step it up and elevate the whole thing,” he said. “We have a lot of creativity here, and we have an iconic place. I like that it's a challenge. We're serving 150,000-160,000 people on Derby Day, and 400,000 people come through here during a normal Derby week. There's no place doing that. It never gets dull, and we're always trying to better ourselves. We never get bored and think, ‘Here we go making the same thing.’ We never do that. It's very magical. As a chef, who wouldn't want to be doing this?”

Danielson begins preparing for the next Derby the day after the race. He has roughly 1,200 full-time staffers for the day-to-day operations at Churchill Downs. Still, typically when the track has no capacity restrictions during Derby week, he oversees upwards of 5,000 food and beverage employees. The 1,200 full-time, year-round employees include front-of-the-house waiters, servers, bartenders, food runners, cooks, dishwashers, concession workers, finance staff and maintenance workers.

“We have a big team of people just to keep everything going,” he said. “It takes us a year of planning, and we start the day after for the next one because we change the menu every year, so we start talking about what worked, what didn't work, what we'd like to do and what we're going to change. It's always an amazing time of the year for us, and we have lots of people who come back and work every Derby. This year, we will probably have somewhere around 2,500 to 3,000 people because of the reduced crows capacity. We spread everybody out, so we still need a lot of people to open all the dining rooms and do all that. We have students coming in from Pennsylvania and all over.”

After the 146th Derby was moved from May to September and took place with no spectators because of the COVID-19 pandemic, Danielson said he is excited for a return to normal with this year’s Derby.

“So many people really have been out of work since last year, so it's really good to see everybody coming back in here and get everything going,” he said. “We have a lot of great dishes, and it's fun to just get everything kind of ramped up again.”

A few years ago, Danielson used a step-counter on Oaks Day and found out he had walked 24 miles during a 17-hour workday.

“In the summer, June and July when we close, we kind of wind-down a little,” he said. “That's really the biggest chance we get for a break. We always take a little time off right at Christmas. Still, as soon as we get back, it's five months till Derby; we're placing orders. We're starting to lay everything out. January and February are so busy for us because we have to order all this food. We have to hire staff. We have to figure out all the logistics and put all this together.” 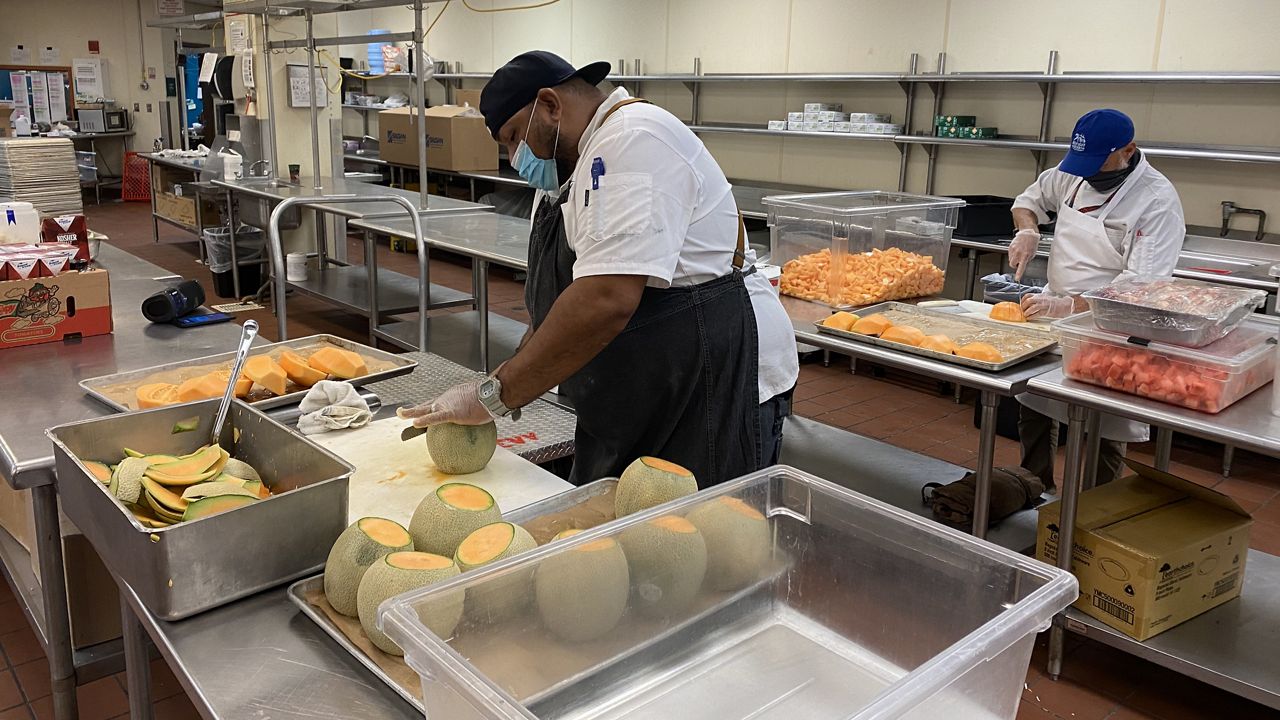 “Every year, we talk to more and more farms and find out what they're doing,” he said. “Then, we try and tell the story about Kentucky and its agriculture, whether it's sorghum, mint from Dohn’s, cheeses from Kenny's or Bourbon Barrel Foods. We've got an amazing platform here, a global platform, to talk about the amazing products in Kentucky. We really try and promote those businesses.”

Not only does buying from local farms help the quality of the food at Churchill Downs, but also helps the local farmers financially and allows them to tout the fact they supply ingredients for food served at the Kentucky Derby.

“We can have a great impact financially on these small farmers, and some are struggling,” Danielson said. “When we buy thousands and thousands of pounds from them, it really helps them out. We're getting fresh, local food and telling their story. Buying from local farms helps everyone involved. The Derby purchases are the biggest sale of the year for a lot of these farms. We want people coming here to get a little taste of Kentucky and a little taste of the South, but we have to have something new every year so people see something exciting on the menu. So many places, especially at this level, are doing very institutional frozen this and canned that. We really are about being fresh. It's the Kentucky Derby, and people expect the food to live up to the expectations. We could just start opening boxes, but we need to provide the chefs that provide a great experience for people. There's no other event like the Derby, especially for chefs.”

His love of Churchill Downs and The Derby

For a man who has worked in such places as Chicago, New York, Las Vegas and the Caribbean, Danielson does not hesitate when asked if his current job is the best he has ever had.

“Yes,” he said. “I have had some amazing jobs, but nothing like this. This is the greatest place. A half-hour before race time, when everybody's at the track, everyone’s stopped eating and stopped drinking and are getting their last bets in, I take all the chefs to the roof to watch the race. When the horses are coming around, and they're singing ‘My Old Kentucky Home,’ to this day, the hairs stand up on the back of my neck. It's an amazing thing. When those horses come down the stretch and everyone's cheering, there's an energy that can't be described.”

Danielson said he feels “very fortunate” to have his job and promotes the Derby wherever he goes.

“I tell people all the time that I don't care what you've been to or what you've seen. If you haven't been to a Derby, you're missing out. This is a bucket-list event,” he said. “People all over the world want to come to the Derby.”

Danielson took a break from overseeing the baking of 10,000 biscuits the Sunday before the Derby. All homemade, the biscuits were for concepts being served this year, such as a fried chicken biscuit with honey, a fried green tomato biscuit, and one with lobster, shrimp and crab called Seabiscuit. He stood overlooking the track from the balcony of Matt Winn’s Steakhouse on the sixth floor and talked about one of the many interesting facts about the Derby.

“Gen. Custer was wiped out at Little Bighorn in 1876,” Danielson said. “That happened the year after the first Derby in 1875. There are very few things that have that kind of history.”

The $3 million Kentucky Derby takes place on the first Saturday in May at historic Churchill Downs in Louisville. Inaugurated in 1875, the legendary 1 1/4-mile race for 3-year-olds is the longest continual major sporting event in North America and the first leg of horse racing’s Triple Crown series. Also known as "The Run for the Roses" and "The Most Exciting Two Minutes in Sports," the Kentucky Derby is the most attended horserace in the nation. This year, the Kentucky Derby will take place Saturday, May 1. Visit www.KentuckyDerby.com for more information.