Ralph Fugate, of Breathitt County, in his home studio. Fugate is the official artist of the 147th Kentucky Derby. (Brandon Roberts/Spectrum News 1 KY)


“Hello,” he said, with an apparent inquisitory inflection. “That’s great. Thank you very much.”

He ended the call, and a perplexed look came over his face.

“I just won a free pizza,” he said. “I don’t even know how that just happened.”

Getting a complimentary pizza falls in line with the way things have been going lately for Fugate. Still, the free pie pales compared to the call he received in late 2020 when the 50-year-old sports artist’s work was chosen as the official art for the 2021 Kentucky Derby presented by Woodford Reserve and the Longines Kentucky Oaks.

“There are artists that have been working for 40 years with all the training an artist can have, and they will never get a Kentucky Derby,” Fugate said. “It’s crazy because this is kind of my first gig.”

The distinction of being the man behind the official art of the 147th Kentucky Derby means his painting is featured on the official programs, limited-edition posters, apparel and other merchandise for the race, which is the first leg horse racing’s Triple Crown.

“My paintings are going to be seen by people all over the world for years to come,” Fugate said. “It’s wild to even think about. It still doesn’t seem real.” 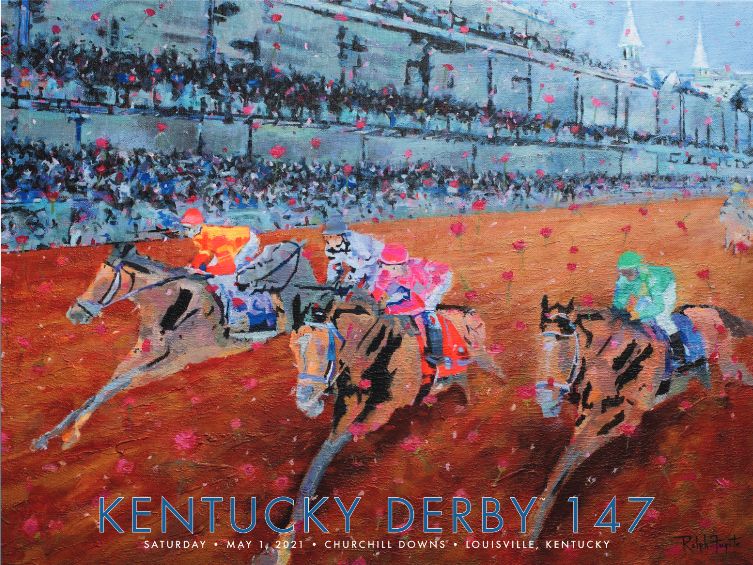 "Down the Stretch" by Breathitt County artist Ralph Fugate was selected as the official art of the 147th Kentucky Derby. (Submitted photo)

Fugate is not a formally trained artist, but has been painting since he was 25 years old.

“For years, I would just kind of doodle around in my notebooks, but I never did anything seriously,” Fugate said. “I would always watch ‘The Joy of Painting’ with Bob Ross and thought to myself that I could do what he does, but I’d never try.”

That was until Fugate’s brother bought him a Bob Ross paint set as a gift.

“I sat down one day with the tutorial video, and Bob would paint his sky, and I'd paint my sky. He'd paint his mountains, and I’d paint mine.”

By the end of the night, Fugate had his first official finished painting.

“I'll never forget thinking, ‘Wow, that's got depth, and it looks like a landscape.’ That's what got the ball rolling, and I thought 'If I can do that, I can do more,' and I kept going. I’ve never had a single class. I don't know about color theories or anything like that. I just paint.”

The single father of a daughter, Abby, and a son, Jack, said being chosen has changed his life in more ways than one. Fugate was laid off from his job doing outreach for the University of Kentucky medical supply program Kentucky Homeplace and Passport Health after nearly a decade.

“I always wondered, 'what I would do if I lost my job,?” Fugate said. “When I lost that one, I had a 10-year-old and 8-year-old. I would always think while driving the kids to school how thankful I was for my job and wonder what I would do if I ever lost it.”

Fugate didn’t spend much time jobless as he was later hired as a community engagement representative for Passport Health Plan. Fugate worked for Passport Health for two years, until 2019, when a highly publicized clash with former Gov. Matt Bevin over funding caused the organization to cut 14 jobs, including Fugate’s.

“I was 49 at the time, and I told myself if I really wanted to be an artist, this was the time. It was sink or swim,” he said. “I launched out and just started doing it full time. You don't meet many artists that get to do it for a living, and I was 50 years old before I could say that. Michael Jordan said he failed his way forward, and that’s what I feel I have done.” 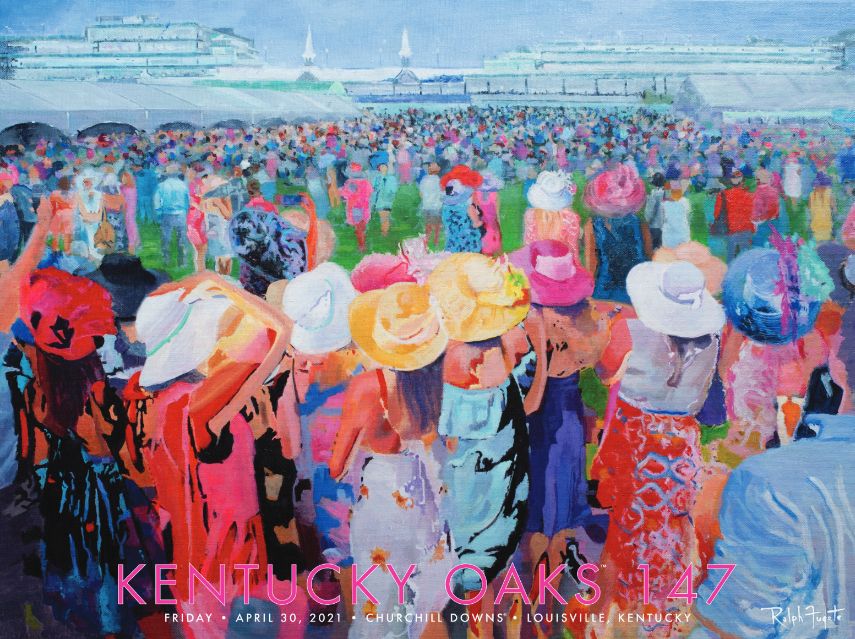 Fugate’s first claim to fame was a painting called “Return to Glory” that celebrated the University of Kentucky’s 2012 men’s basketball national championship under head coach John Calipari. The only image ever endorsed by Calipari, he commissioned 500 limited-edition prints of “Return to Glory” and personally signed each one.

Being chosen as the official artist of the 147th Derby and the fifth artist from Kentucky ever to have the distinction coincided with Fugate “finding his voice,” he said. He emailed some pictures of paintings he had been working on to a friend in Louisville, a fellow artist and high school classmate of Fugate’s. Eventually, Tonya Abeln, vice president of corporate communications at Churchill Downs, was copied on the emails, and she reached out to Fugate.

“I told her my story in an email and sent her some pictures of a few paintings,” he said. “This was about the time I felt like I found my voice as an artist because I wasn’t copying a picture; I was painting with feelings. Tonya told me my work was unique and asked me to send her whatever I wanted. I would paint a picture a week and send them to her.”

About four months of correspondence passed. This past December, Fugate was in his studio painting around 9 p.m. and received an email. 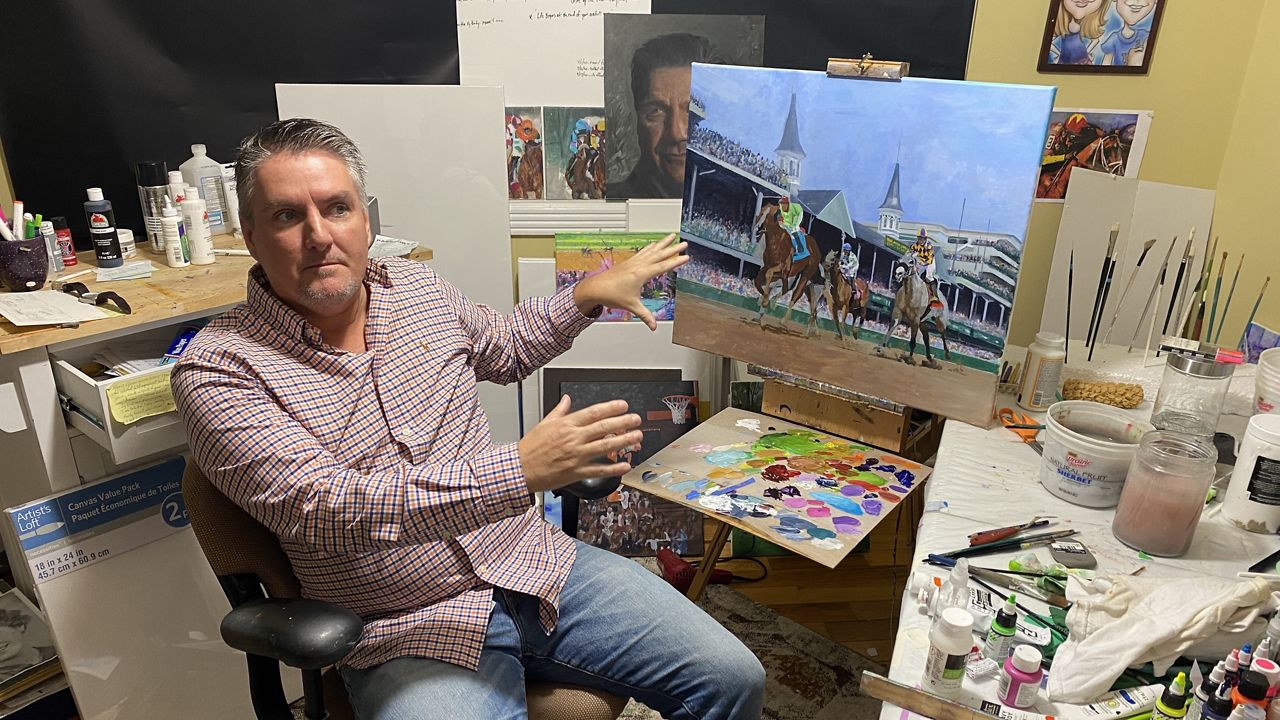 “I was asked if I was interested in being the official artist for the 2021 Derby,” Fugate said. “When I was sending pictures of my paintings to Tonya, I just hoped she liked them. I had no idea I was being considered as the official artist, which is good because I would have been so nervous I would have overthought everything.”

After a year fighting a global pandemic, the message behind the Derby painting, titled “Down the Stretch,” is one of hope and healing, signified by the roses falling onto the track during the race. The vibrant colors used in the Kentucky Oaks painting highlights fashion and springtime in the commonwealth.

“When I found my signature style, there was a major difference in my work,” Fugate said. “Everything changed – the shapes, colors, details. I wasn’t copying a picture anymore. Anybody can take a picture, print it off and frame it. Who knows what’s going to happen now and what opportunities lie ahead? To me, the only event bigger than the Derby is the Super Bowl, and I’m starting with the Derby. If I go up from here, I don’t even know what that means because this is so incredible. I was so excited when I got the email that I had been chosen. I wanted to just take off running.”