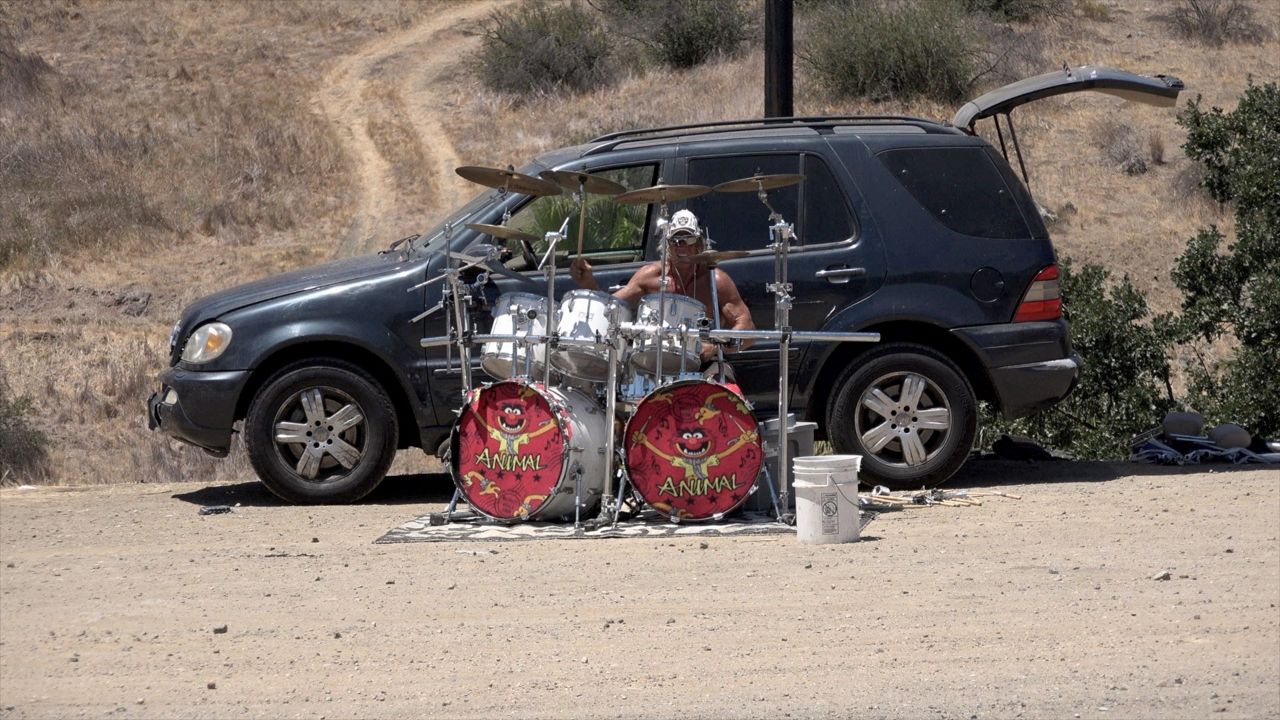 Drugs, alcohol led to homelessness and playing drums on the side of the road, but his child changed that

AGOURA HILLS, Calif. — It's been a long road for Robbie Dean. He was once in a rock band, but now he plays drum solos, on weekends, on the side of a busy Kanan Road in Agoura Hills. Thousands of beachgoers drive by the "drum man," as he is known, on their way to Malibu.

"I didn't intentionally say, 'Hey. I'm gonna play drums on the side of the road,'" Dean said.

But alcoholism and addiction eventually beat Dean down to homelessness.

"I spent 16 years on the street wondering why," Dean explained. "How do I get out of here? And I started getting sober."

After doing time in prison, he put down his last drink 11 years ago. But, when he picked up his sticks again, he had a drum set without a stage.

"Well, what are you gonna do?" Dean said with a shrug as he pointed to his drum set. "Why even have 'em if you ain't gonna play 'em? And I guess I was driving by here when I thought that."

A dirt pull-out is where Dean parks his SUV and then sets up an elaborate drum set.

Playing on the side of the road was also a way for him to earn a little cash. Dean said he is very aware of his appearance; he knows passersby judge a book by its cover. By all appearances, he's a wild-eyed, bleach-blonde, crazy-haired rocker with a surfer's drawl.

But Dean's story, like any road, took a turn. He got a woman pregnant.

He's in foster care. Dean pulled out his iPhone and swiped to a picture.

"That's my boy," he said, rubbing the glass over the face of a green-eyed toddler.

The mother is allegedly an addict, and authorities deemed her unfit to care for the child. During the COVID-19 lockdown, Dean didn't have a job or a place to live, so social services took custody of the infant just after birth.

But Dean made a choice.

"I'm just gonna be a dad to my son," Dean said with a snarl. "He's my son. He's my flesh and blood. And I'll be damned if I'm not gonna be the one that takes care of him."

For 16 months, and while living out of his car, Dean beat the court system, navigating through bureaucracy, filing his paperwork with not much help from a lawyer. And all of his hard work and steady beat began to pay off.

"The bottom line is this," Dean said. "I kept in good measure with the people in charge of my son."

Today, with assistance from social services, Dean lives in a motel and is granted regular, unsupervised visits twice a week with his year-and-a-half-old boy.

"This is my boy," Dean said, in the motel room, as he holds his child close on the bed. "No way could I ever imagine this."

Just like with the roadside voyeurs, Dean had to cope with his appearance.

"Because you know how society is. They judge a book by its cover," Dean explains. "You know what I mean? In the beginning, they took a look at me in court, and I'm sure my attorney just thought — they all thought — there's no way, right?"

Over time, Dean said that he had to prove he was responsible, keep all his court-ordered commitments, and demonstrate a special bond with his child before he was granted partial custody.

Dean picked up his boy, held him close to his face, and said, "Say I love you, Daddy!"

Dean said one day his lawyer walked out of court and told him, "I don't know how you did it, but the people really like you."

Dean paused as he gazed at his son.

But Dean's legal work wasn't finished. He wanted to change his child's name. Again, his lawyer couldn't help him, and the courts were backlogged during the COVID-19 pandemic. But, somehow, Dean was able to file the proper paperwork to have his son's name legally changed to "Kanan Dean."

He is named for the road where his dad beats out his passion and his demons.

Back on the side of the road, Dean takes a swig of water between drum sessions.

"Things are gonna get better," he said. "I don't know how. But they will.

They are already getting better. Recently, someone stopped on the side of the road and offered Dean a full-time job.

The book's cover may say Robby Dean is a wild-eyed, wild-haired roadside rocker. A few pages in is a dedicated father.