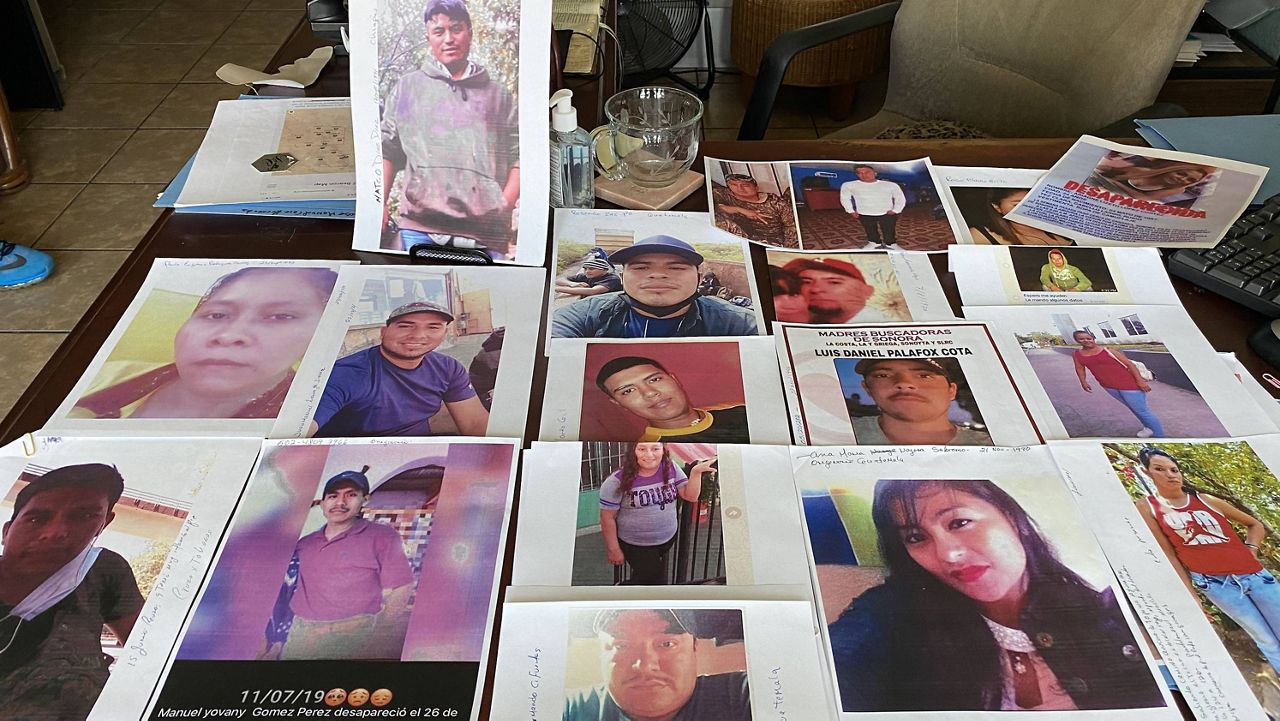 This year 127 sets of human remains have been recovered compared to the 96 at this time last year.

Local group searches for migrants who die crossing the border

EL MONTE, Calif. — For the past three months, the Vega household has been living tense days because one of their family members, Ariagne López, known as Ari, went missing crossing the desert from Mexico into the United States.

"We are constantly worried," said María Elena Vega, who goes by Malena. "We still have faith that we'll find her."

López is the wife of one of Vega's nephews.

"You feel powerless. Powerless. You think this is something that happens in movies. Then it happened to us," Vega said.

This was López's third attempt to cross the desert. She was desperate to reunite with her 4-year-old daughter, who crossed months before and now lives in Florida with her father.

After 12 hours of walking, she could not go on, and her group left her behind.

"How could they have left her there? She was 24. She had a whole life ahead of her with her husband! They had so many dreams together, and those dreams died there, in that desert," Vega said.

In the weeks after she went missing, Vega and Gustavo bought boots and hiking gear and joined a local rescue group called SOS Búsqueda y Rescate, or Save Our Souls SOS Search and rescue.

Every second weekend of the month, they go out to the Arizona desert to look for López.

Months later, they are still searching, but now for a body. Ahead of their next search, they meet up with the rest of the rescue group that operates out of a travel agency office in El Monte.

López is just one of the growing numbers of missing people the group is searching for.

"These are the cases that came in yesterday afternoon. We have five new cases," said Adriana Carrillo, the founder of the volunteer group.

She is a travel agent who has spent the last four years hiking through the desert, trying to give families the closure she never got.

"We lost a family member many years ago, and back then, there were no rescue groups. So we lived through that anxiety, suffering and desperation, not knowing what happened," she said.

On her desk is a pile of dozens of blue folders. Every file is a missing person. A family who has not heard from their loved one and has referred the case to Carrillo, begging her to please find them.

The pile only reflects the cases she has been asked to work on so far this year.

"It's gone up a lot since I've started doing this about four years ago. This time there have been a lot of calls for help," Carrillo said.

"It's shocking," said Rebecca Fowler, administrator for Humane Borders, an organization that maintains water stations across the desert and tracks the death coordinates of migrants, plotting them on a map.

So far this year, 127 sets of human remains have been recovered compared to the 96 at this time last year.

Most die from exposure and hyperthermia. The June heatwave increased the loss of life.

"A few migrants who perished, who died, they had water on them. At that point, you can have water, but you are going to die from exposure. Too much heat, the human body can't take it," Fowler said.

It is not just SOS Búsqueda y Rescate searching; there has been an 81% increase in CBP rescues this fiscal year compared to last. For every single body that is recovered, another three to 10 are never found.

Vega said she hopes that will not be her family's fate.

"We pray to God that after this next search for Ari, we will be able to give her a proper burial," she said.

Even if they can't find López, the group said they would keep going out, sparing no fortune or time until the cases are solved.