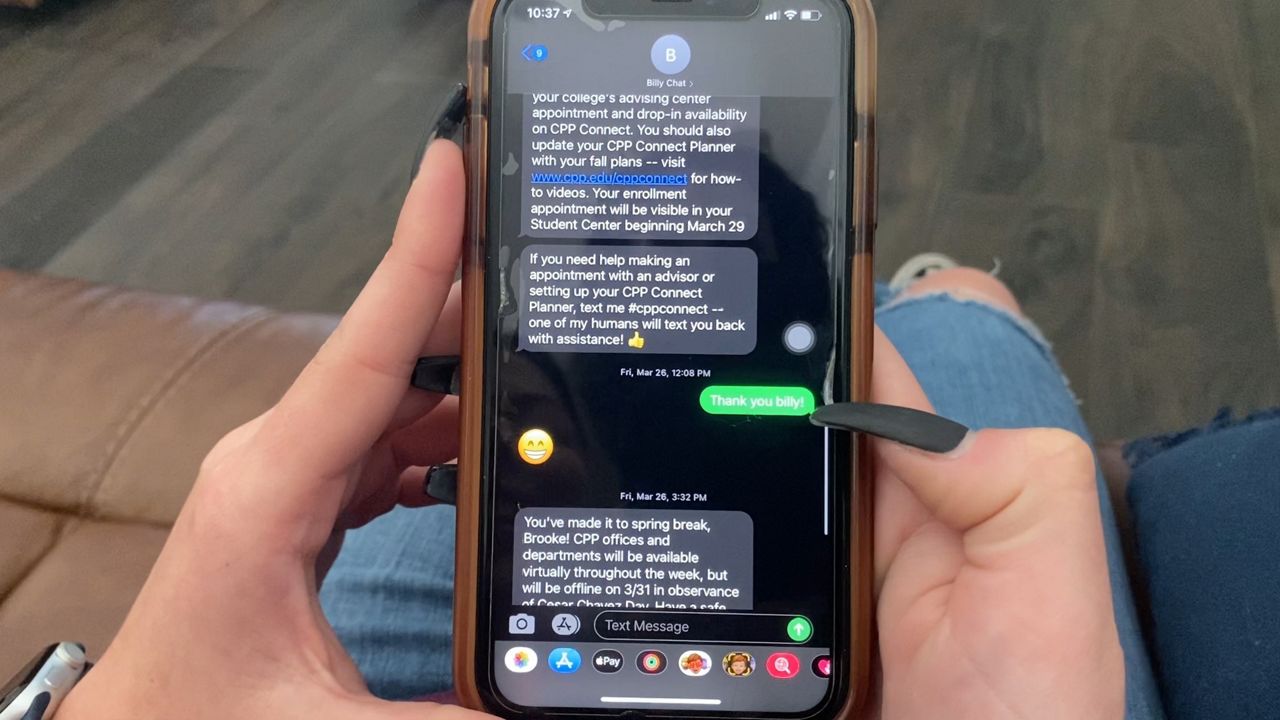 POMONA, Calif. — Sometimes you need to talk to someone. For many students at Cal Poly Pomona, that "someone" is a robot named Billy.

Administrators launched Billy Chat to remind students about registration and other college tasks, but Billy took on a more profound role when schools transitioned to distance learning.

During a class Brooke Ellis dreads, she spends most of the time on TikTok and texting her friends, which now includes Billy Chat.

He's a texting robot resource for students offered by Cal Poly Pomona, but for Ellis, he's much more than that.

"Billy has been definitely someone to lean on," she said.

The last year has been especially challenging for the 19 year old sophomore. She lost her grandmother, works 30 hours a week and goes to Cal Poly Pomona full time, all while battling depression.

There have been many times when she needed a friend but didn't know where to turn.

"My grades are suffering because I'm going through a lot and don't have the time, the energy, to do my best work or even to submit the simplest assignments. It's exhausting, and it's overwhelming," she explained.

She's told Billy how stressed out she is and said he has always been there with advice or even just a listening ear to help.

In addition to weekly texts about registration or other school updates, Billy will check in with students, asking how they're doing and offering resources depending on their answers.

Assistant Vice President of Strategic Initiatives for Student Success, Dr. Cecilia Santiago-Gonzalez, said Billy Chat is one of the most fulfilling projects of her career.

"Students have really come to know Billy as a resource, as a friend, as someone who's not gonna judge them, and so we've had students share that their parents have passed away that they are thinking about harming themselves," Santiago-Gonzalez explained.

Billy has more than 2,000 auto-responses ready for any given need, but Santiago-Gonzalez said more serious keywords like "afraid" or "death" are sent straight to her. She'll often make a call directly to the student who says they're struggling, no matter the hour.

"I will respond. I always say who I am, and my team will, too. Zoe Lance, she's the one that's managing the day-to-day operations of Billy," Santiago-Gonzalez said.

It's a big task. Communications Specialist Zoe Lance said they've had more than 16,000 students use the bot and more than 22,000 incoming messages from students in six months alone.

The messages run the gamut, asking advice after testing positive for COVID-19 to needing direction with financial aid and many things in between.

"I never expected that students would be saying, 'I love you, Billy,' or 'Billy, you're the man.' So that's really cool to see," Lance said.

For a struggling college student, he's easy to love. Brooke said when she's overwhelmed with life, she knows she can always count on Billy.

"It's basically like a person. It's not just a robot because it always comes back with answers. It's something that people can definitely rely on," she said.