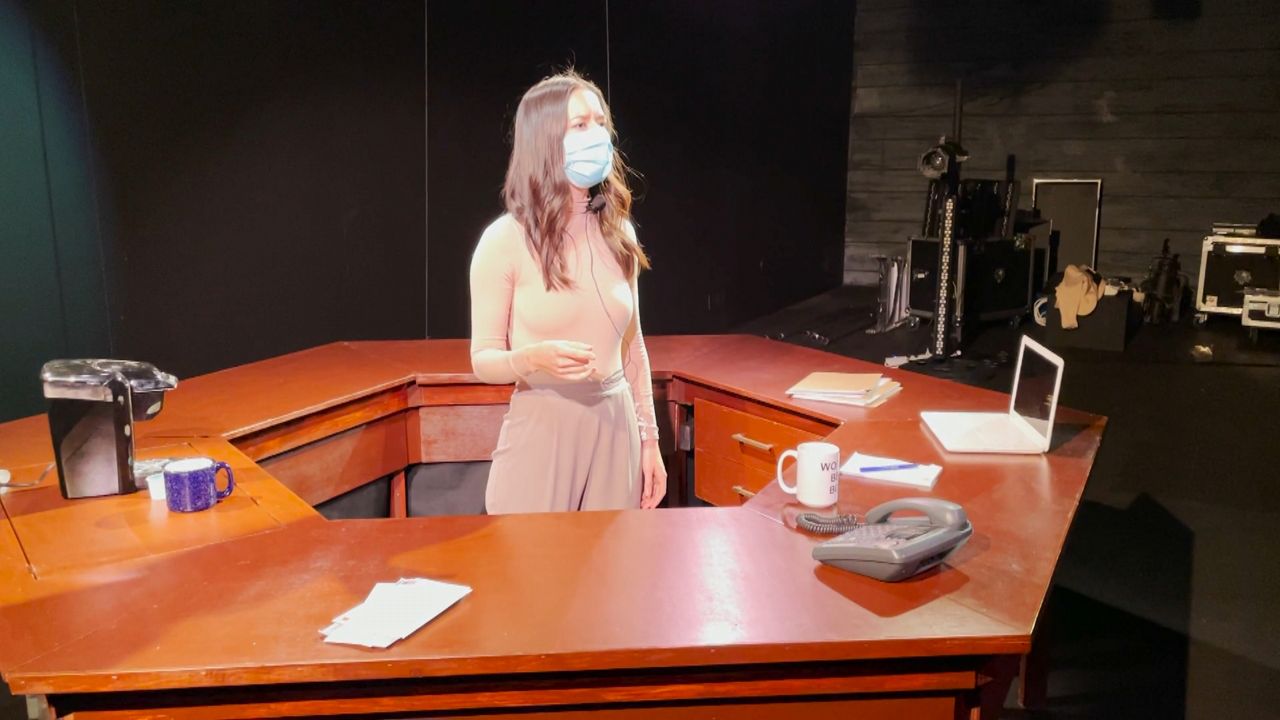 LOS ANGELES — Performing a one-woman comedy show in a theater with no audience is no easy task.


“It’s not something I would want to do again,” said Carrasco with a laugh.

Her play, Anyone But Me, is one of two solo shows that will be presented virtually by IAMA Theatre Company. The second is Anna LaMadrid’s The Oxy Complex.

"That’s what you get for breaking up with Blair before a pandemic," said a booming voice in one character’s head.

Set in the 500th day of quarantine, the show looks at human interaction and the release of oxytocin, something LaMadrid says we crave.

“And now I thought it was an interesting thing to look at, us going through withdrawal, because we’re not seeing people," said LaMadrid. "Dating virtually stopped, and what happens when someone is left by themselves with their thoughts?"

Both women are members of IAMA Theatre Company and welcomed the chance to write a full-length solo show for the first time. Carrasco, who admits she doesn’t like to multitask, found this to be the perfect window to take on a writing project.

“There’s nothing else on your plate,” she said, “Just write what inspires you and write from your gut.”

LaMadrid had rehearsal twice a week with her director, Michelle Bossy, who she said kept her on track with getting new pages done. But rehearsing over Zoom was frustrating, LaMadrid explained, as poor connections and frozen screens made it hard to concentrate on the material.

"My earphone would fall out, and then I’m like, 'wait,' and then I couldn’t hear the cue," said LaMadrid. "You know, a lot of times when I was in rehearsal and everyone’s muted, you’re like slowly dying inside. I’m like, is this even funny?"

She was therefore thrilled when she was finally able to step inside the Pico Playhouse and be on stage again — the first time since the pandemic began. It was Carrasco’s first time back as well, but even though it takes a lot of people to produce a one-person show, LaMadrid noted that she felt perfectly safe on set, as crews worked under strict COVID protocols.

“It’s a dark theater, and at one point the only thing I could see was all of the white masks,” she said. “In a way, it was good because it reminded [me] that people were there and were watching my show.”


The women are excited to add their voices to the theatrical conversation, especially since their experiences aren’t ones they often see reflected. Both are Latinx women who don’t fit neatly into someone else’s idea of who they should be.

“It’s something that in my career, I struggled with a lot in the beginning,” LaMadrid said. "It’s like, 'Well you’re not sexy enough, but you also don’t look like the maid. So where do you fit in?'"

It a question they’ve both grappled with professionally and personally, and one they think has probably been a recurring a theme for many people over the past year.

“There’s a lot of introspection going on, probably because we’ve been alone and by ourselves for a while now," said LaMadrid. "So who we take out into the world is more important than ever after this.”

Carrasco said she expects there will be quite a few transformations as we emerge from our COVID cocoons, and she hopes one of them is newfound appreciation for seeing a show, next to a stranger, and laughing together.

Anyone But Me and The Oxy Complex will be available to stream on demand March 21 through April 18.