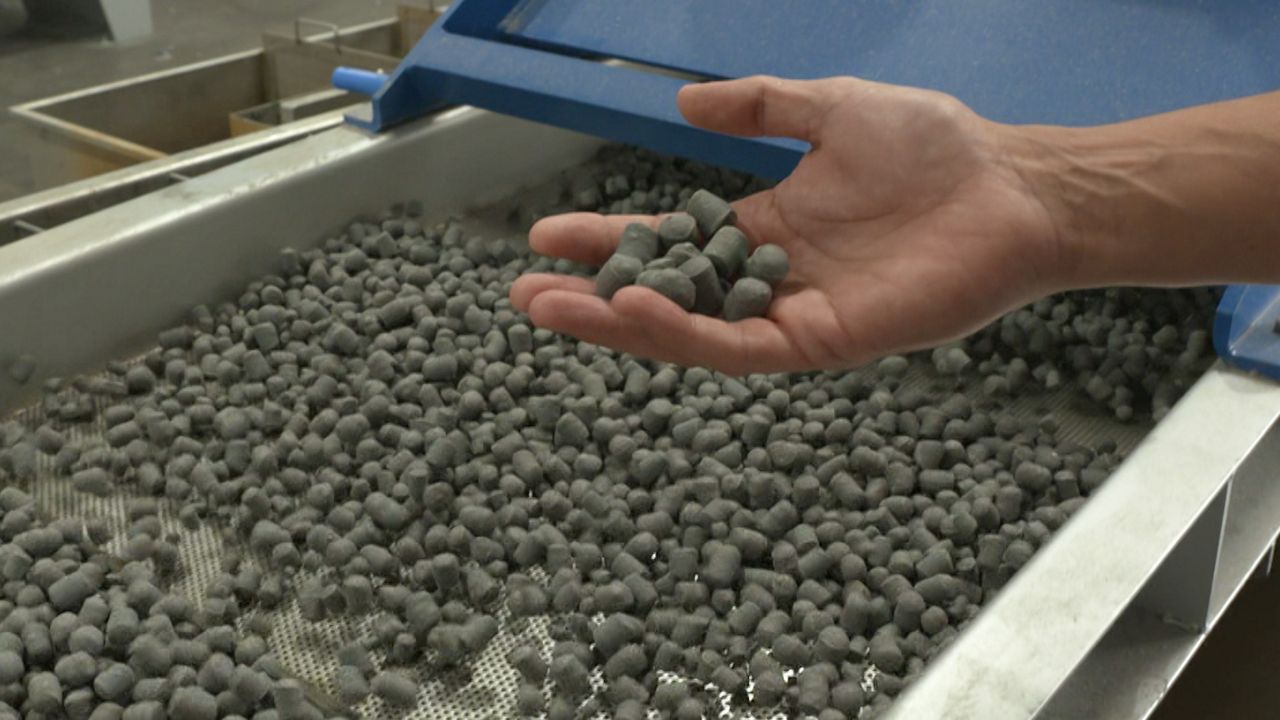 SANTA ANA, Calif. — Walking around thousands of pounds of unrecycled plastic each day isn't something Argentina native Sebastian Sajoux ever thought he would be doing. But the serial entrepreneur has published a magazine, worked as a photographer and launched a consulting firm, helping big companies such as Coca-Cola and Unilever get to zero waste in landfills.

That's when he learned about a big problem.

"If you think that every time you drop or discard a plastic, half of those plastics are already unrecyclable," Sajoux said.

He said 350 million tons of plastic are discarded every year worldwide, much of it going to landfills or the environment. Part of the reason is if a product is made up of different types of plastic, it automatically cannot be recycled. So it got him thinking about how to turn all that plastic into something sustainable.

"First thing that came to my mind was the construction industry because they are massive," he said. "So we started developing this gravel to be used as an alternative to mineral gravel for concrete."

Sajoux spent four years developing technology in Argentina that turns discarded plastic into "smart gravel" before he opened his main facility in Santa Ana in January.

"We are not only processing post-industrial and clean plastic but also post-consumer and plastic that is currently being sent to landfills," he said.

Every hour, his facility processes 1,500 pounds of discarded plastic, which is first ground up and cleaned.

"Then that goes into a system where it is heated up and shaped into the form of gravel," he said. "It's cleaned and washed again and cooled down and separated to be packed for either super sacks for big users or small bags for retail."

But it's not only construction companies using the gravel. Gardeners like Hawthorne resident Monica Daniels are also finding ways to use it. Daniels said it helped grow her "green thumb," which she admits needed work after one of her diehard house plants didn't survive.

"If anyone knows anything about snake plants is that they are hard to kill," Daniels said. "But I watered it way too much, and it didn't have proper drainage. It didn't have the proper soil, and so the soil just soaked up all the water."

Daniels turned to gardening while she was stuck at home during the pandemic, and through trial and error, she managed to grow succulents, vegetables and fruit on her patio. She discovered the gravel after embarking on a personal 30-day sustainability challenge to kick off green habits. She said the gravel helps her plants drain properly, crucial since she doesn't have a backyard.

"After I put the gravel in the bottom, about like an inch or so layer, and then I put the dirt on top," she said.

Sajoux is focusing on discarded plastics in Southern California and said that he makes one ton of gravel for every ton of unrecycled plastic he receives.

"We're taking it from local recyclers that are interested in deviating these plastics from the environment, so we try to keep the solution local but also to keep the carbon footprint low," he said.