CINCINNATI – Thousands of Cincinnati Bengals fans will watch this year’s Super Bowl and cheer on their hometown team against the Los Angeles Rams, but none of them will do so from inside Paul Brown Stadium.


The NFL has denied a request by Hamilton County to host a fan event inside the publicly owned stadium for a game being played on Sunday, Feb. 13. The game will be played nearly 2,200 miles away at SoFi Stadium in Inglewood, Calif.

“As you are aware, we had been working to initiate a Watch Party for the Super Bowl at Paul Brown Stadium. Part of that work included the necessity of obtaining approval from the NFL for broadcasting the game. As indicated in the attached letter, the NFL has denied that approval,” wrote Hamilton County Administrator Jeff Aluotto in a letter to the Board of County Commissioners.

Alutto is referencing a letter he received Wednesday from Eric Brown, managing director of Paul Brown Stadium, LTD. In his letter to Alutto, Brown said the team reached out to the NFL on behalf of Hamilton County about the possibility of hosting a watch party at the Bengals’ home field.

Brown said the NFL reviewed the proposal and said, "No." He added that the decision was “consistent with the NFL’s Rule and Policies applicable to similar events.”

“(The) NFL, its 32 franchises, stadium operators, sponsors, broadcasters, and other involved parties, organize and broadcast over 500 games for millions of fans to attend and view each year. The legal and logistical barriers to holding a ‘Watch’ Party for Super Bowl LVI are too significant,” Brown wrote.

Brown closed by saying that the Bengals are excited that there are “multiple alternatives within our community for Bengals fans to cheer on our home team to victory on Super Bowl Sunday!” 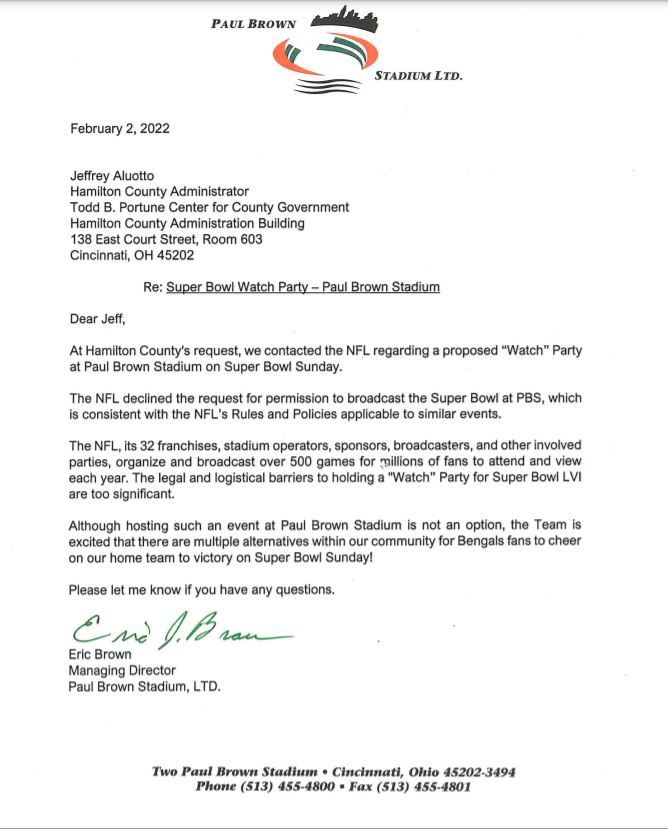 For the past few weeks, Bengals fans have urged leaders from the team, Hamilton County and the city of Cincinnati to host a party at Paul Brown Stadium. The stadium can hold over 65,000 fans.

Proponents have argued the thought of watching the game with tens of thousands of fellow fans would be a once-in-a-lifetime opportunity. Critics have argued that a stadium-based watch party is a bad idea for reasons ranging from the potential COVID spread to it hurting small businesses that would otherwise make money off the game.

Those cheers were heard most loudly last week ahead of the AFC Championship game against the Kansas City Chiefs.

In response, the county issued a statement saying that they couldn’t host an event at Paul Brown Stadium due to “logistics” challenges. “Unfortunately, given the attendance uncertainty, time constraints, and numerous operational challenges, including fan safety and staffing, the county cannot feasibly pull together all the logistics, for a (Paul Brown Stadium) watch party in time for this Sunday’s game,” wrote Bridget Doherty, communications manager for Hamilton County.

In her response, Doherty refers to Paul Brown Stadium as the “people's stadium.”

At the time, Doherty said the county would work with public and private partners, including small businesses, to find other ways “to continue the celebration” of the Bengals. One of those events turned out to be a large-scale block party at The Banks, an entertainment district in downtown Cincinnati located a few thousand feet from the stadium.

The game was broadcast, with sound, on the video board outside neighboring Great American Ball Park.

Alutto said that events such as that one will be pursued this week as well. Other possible locations include sites like Fountain Square.

“I know this will be disappointing to some in the community who have become very excited about this idea. However, we will continue to work with our partners to ensure the county is doing everything we can to ensure the best possible fan experience on the day of the game here in town,” Alutto continued.

He goes on to say that the administration has a meeting planned Thursday with “many of these partners to continue coordinating on activities occurring at The Banks and around (Cincinnati) on Super Bowl Sunday.”