CINCINNATI — When you step foot inside The Hub OTR, your first thought isn’t “sports bar.”


The modest establishment on Main Street in Cincinnati’s Over-the-Rhine neighborhood is best known for punk rock shows and offbeat decorations. Until a few weeks ago, the only Rams you’d see there would be part of bar owner Lindsey Swadner’s ever-growing collection of taxidermy. There’s a large stuffed bear in one of the display boxes at the entrance.

Now they’re set to host a watch party for a handful of regulars and other bar-goers when the Cincinnati Bengals play the Los Angeles Rams Feb. 13 in the Super Bowl. 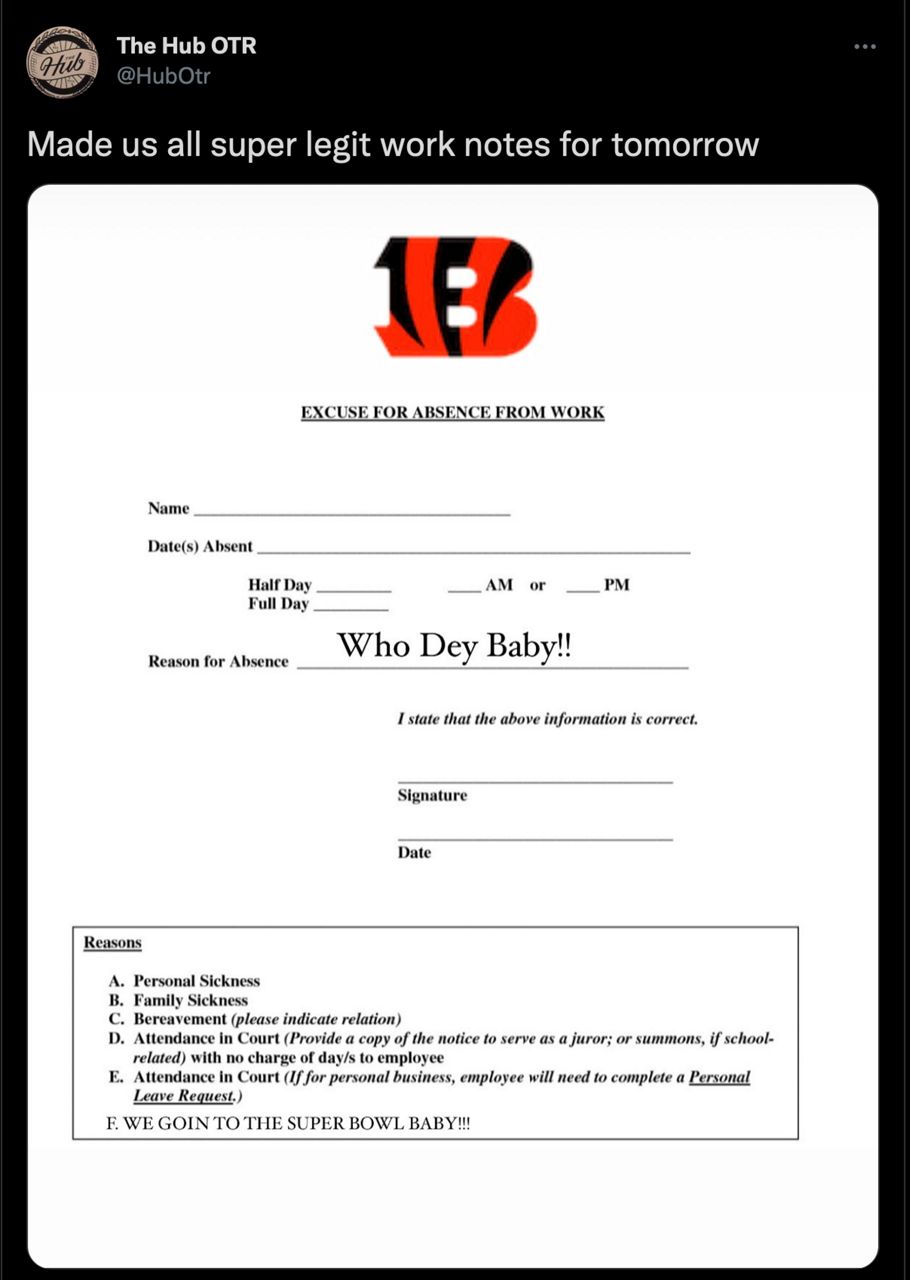 A screen grab of a tweet from The Hub OTR following the AFC Championship game in 2022.

“I think it’s pretty obvious that we're not normally a sports bar,” Swadner quipped. “The Bengals are going to the Super Bowl and we want to accommodate some of our regulars.”

She opened the bar a few years ago as a sort of refuge for fellow bicycle enthusiasts and a place to hang out with her friends.

In the past, the bar didn’t broadcast any games on its TVs. The Hub’s three screens are usually reserved for whatever is on cable that strikes Swadner or another bartender’s fancy at the time.

But that started to change over the past several weeks as the Bengals’ success reached new levels and excitement around the team hit a fever pitch.

“There are a lot of bars down here that normally don't play the games. Now, everyone's kind of just trying to keep up because there's a renewed interest,” she said. “Now everyone has the game on.”

Swadner has experienced a definite uptick in business. And while she doesn’t have hard numbers to back it up, the crowds she sees around other bars in the area suggest it’s a trend.

Honking car horns and chants of “Who Dey?” could be heard throughout Over-the-Rhine and nearby neighborhoods like Pendleton and the Central Business District for hours after Sunday’s AFC Championship game was done.

Sunday’s championship game also caused Woodburn Brewing in East Walnut Hills to have one of its biggest days since reopening in April of last year.

Bar manager Giacomo Ciminello described the brewery and gastropub as having a “pulsing energy” all day – from their brunch rush through the Bengals’ game-winning field goal to the post-game celebration.

Overall, Woodburn had a 218% jump in sales compared to the previous Sunday, Ciminello said. He was quick to point out that their financial success Sunday was due in part to their monthly drag brunch, which was already scheduled prior to the Bengals earning a trip to the AFC Championship game. 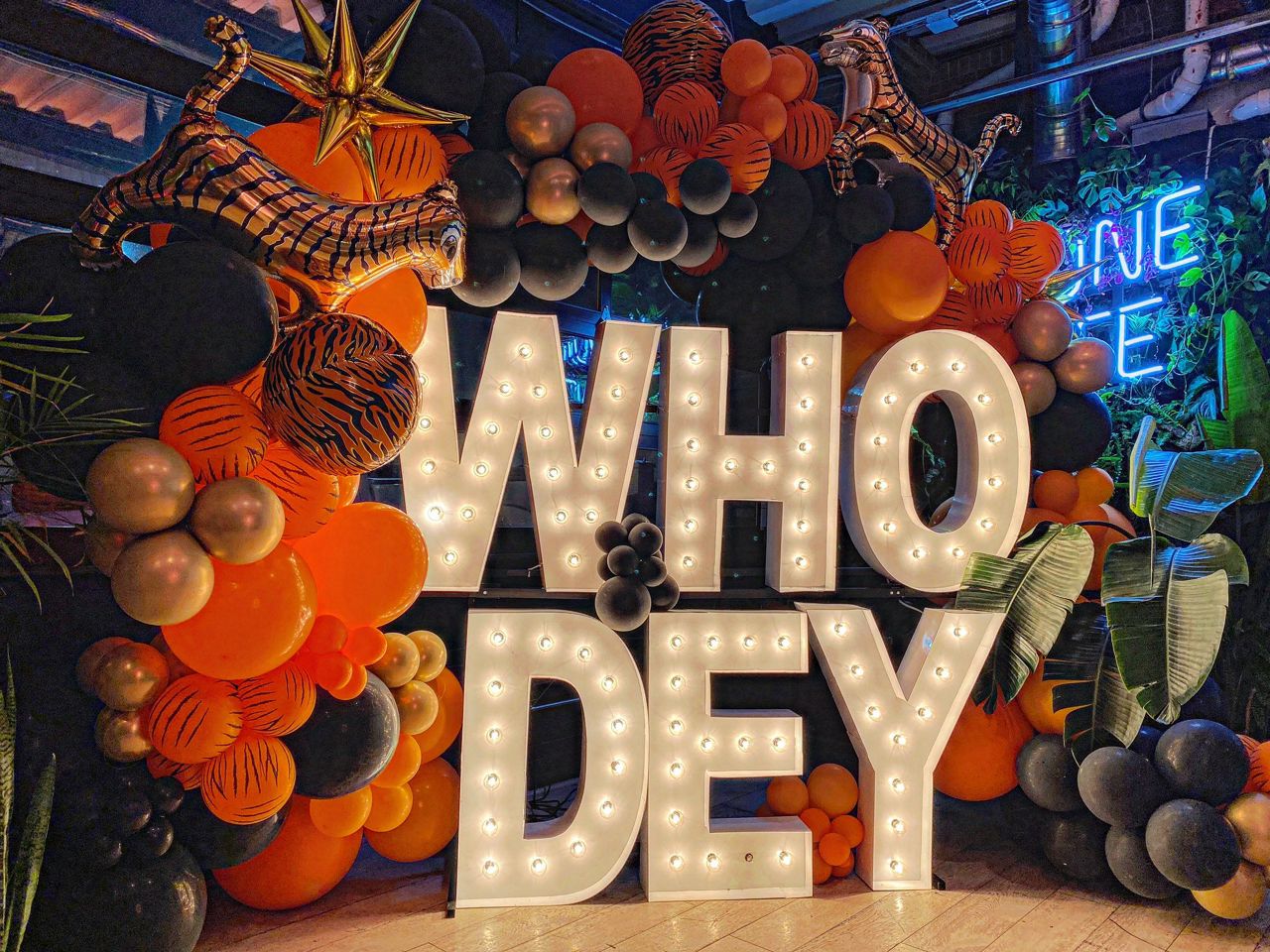 Still, sales were up about 35% compared to their last drag brunch in late December.

Sunday just “felt different,” Ciminello said. He called it an “amazing pre-game” in support of the community. "Many folks just hung out all day – our little neighborhood family.”

Ciminello is interested to see what the turnout will be in two weeks for the Super Bowl. The game is one day before Valentine’s Day.

Typically, a lot of non-sports bars and restaurants actually close on Super Bowl Sunday because demand isn’t that high. But the mixture of the Bengals game plus the extended Valentine’s Day weekend could make a difference this year.

Workers in the service industry often view Valentine’s Day as the end of the "slow season,” a post-holiday seasonal lull that stretches from New Year’s Day through mid-February. The slowdown is attributed to various factors – people spend too much during Christmas, they’re trying to drink less or lose weight, it may be too cold to go out.

A lack of playoff football may have been a factor, too, said Jim Moehring, owner of Holy Grail Tavern and Grille at The Banks.

In the 11 years it's been open, Holy Grail has lost money every January and February. It’s something he and other restaurant owners plan for, Moehring said. Most staff members don’t have that luxury, though, especially those who rely on tips. 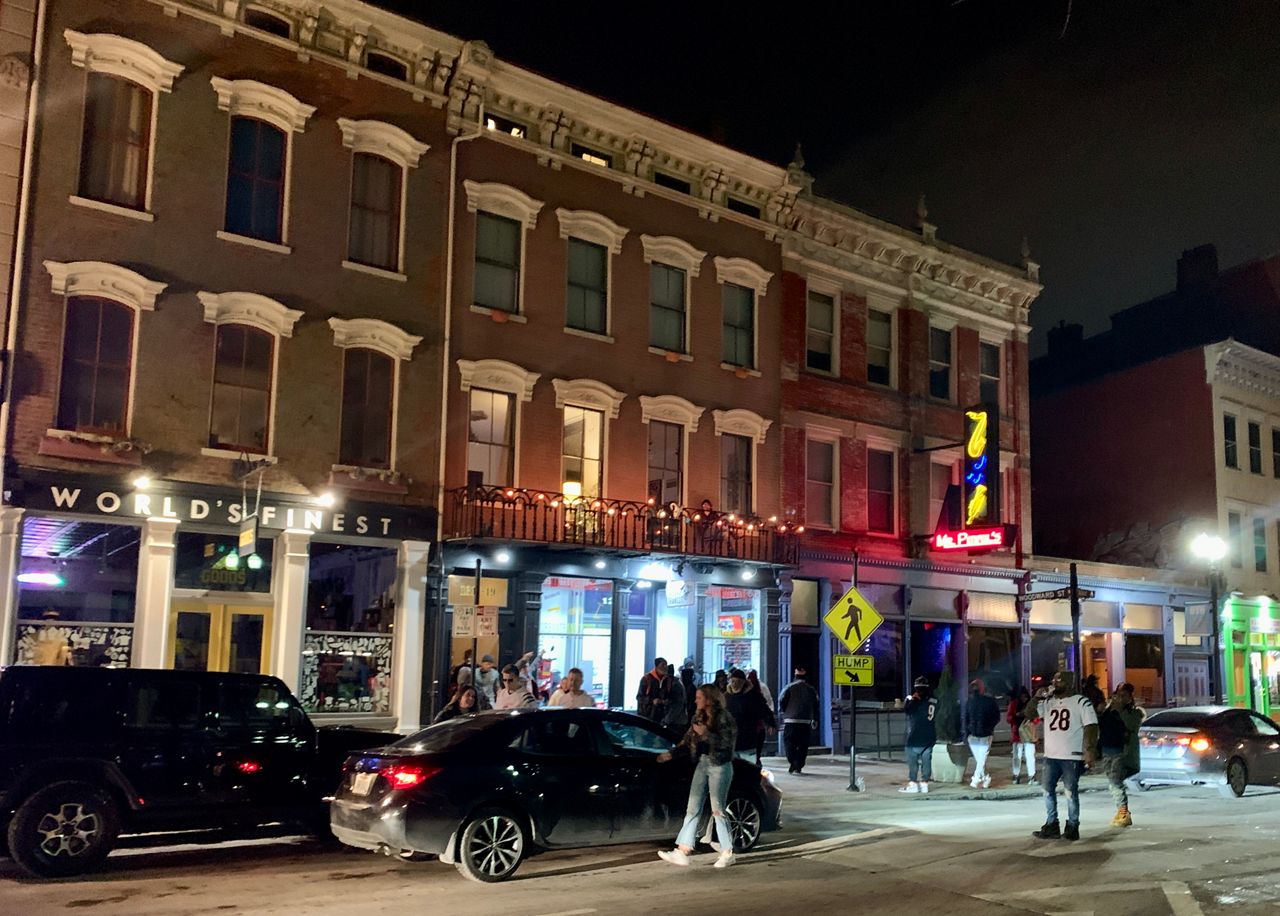 “As business owners, we budget for these situations. It's many of the servers, the bartenders and tipped employees who don’t, or aren’t able to do that so this season can be tough for them,” he said. “Having this influx of revenue is a game-changer for them.”

Bengals playoff successes – as well as the University of Cincinnati Bearcats berth in the College Football Playoff – have been great for business, Moehring added.

Marisa Rigali, one of Holy Grail’s bartenders, said the success of local sports teams have helped lessen the usual winter drop-off in business.

She didn’t want to divulge specifics, but said she made “three to four times” in tips during the AFC Championship game compared to what she would on a typical Sunday.

“When the Bengals play well, those are the days that I make the most,” Rigali said. "To have the Bengals continue to (win) is great for everyone. I mean, if they win, we win.”

Rigali watched Sunday as an older gentleman, as she called him, "cried at the bar for two hours" after the overtime victory by the Bengals. It clinched the club's first Super Bowl appearance in 33 years. Despite the tears, she feels the success of the Bengals is sending out "good vibes" citywide.

"These past couple weekends have been great; we've had a good environment, there really haven't been any problems. I think because the Bengals are doing so well, it's making people happier," Rigali said.

Holy Grail is about a half-mile walk from Paul Brown Stadium, where the Bengals play their home games. There are about a dozen or so other bars and eateries between the sports bar and the stadium, and most have been packed on game days with fans.

On Sunday, Holy Grail had to open its outdoor bar to accommodate larger crowds. Fans braved sub-freezing temperatures and poured out onto the closed stretch of the Freedom Way to watch the game on the giant TV screen outside neighboring Great American Ball Park.

Even with the patio and tables set up in the street, they still had a line all day, Rigali said. She started working at 11 a.m. Sunday and didn’t get home until 4 a.m. the next day. Usually she’d be cut around 5 p.m., she said.

“It was busy the entire day – from open to close. People were everywhere, every bar was full, even the streets were full,” Rigali said. “It was crazy.” 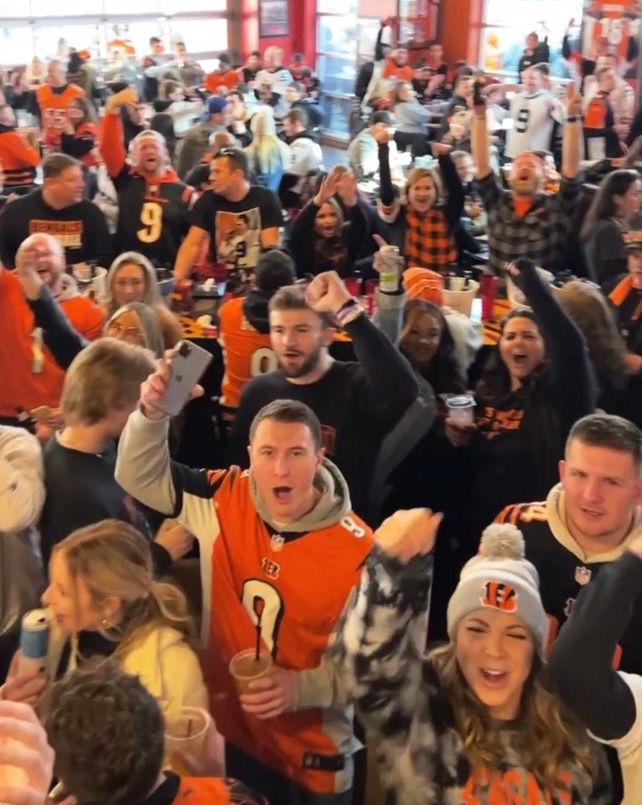 The crowd inside Holy Grail Bar and Grille at The Banks. (Provided)

Local restaurants, bars and sporting goods stores have received immediate benefits from the Bengals’ winning season. But the Super Bowl berth could have a much bigger impact on Cincinnati’s growth down the road, according to Anastasia Mileham. She labeled the potential impact “almost immeasurable.”

“The Bengals going to the Super Bowl stands on its own, but coupled with UC’s great football season, the Intel win for Ohio, and the dozens of ‘best’ lists (the city) topped this year, Cincinnati just can’t lose,” said Mileham, executive director of Cincinnati Experience.

The hope is that the positive coverage will lead to more tourism and attract new businesses in the region.

During the month from Dec. 26, 2021 through Jan. 26, 2022, the Cincinnati Bengals playoff run provided the city of Cincinnati tens of millions of dollars in media coverage as well as a global media audience of 1.5 billion, per data from media monitoring firm Critical Mention.

The cost for an advertising campaign of similar scope is estimated to cost more than $46 million.

Organizations whose mission it is to market this city in some capacity – the Cincinnati USA Regional Chamber, the Cincinnati Convention and Visitors Bureau, and REDI Cincinnati – are “giddy,” Mileham said.

“All the stories that lead up to a Super Bowl -- about the cities, the players, the history, the people – those are feel-good stories that you simply can’t buy,” she added. “And that can lead to people wanting to visit Cincy, move to Cincy, or consider Cincy as a business location.”