A sign noting the Watch Party at The Banks for the USA/Mexico soccer match on Nov. 12, 2021 at TQL Stadium (Spectrum News)

CINCINNATI – The United States vs. Mexico match on Friday is set to be one of the biggest events in North American soccer this year. It's also expected to highlight a big weekend for Cincinnati businesses.


​Mayor John Cranley and Hamilton County Commission President Stephanie Summerow Dumas joined a group of business leaders at The Banks on Wednesday to announce plans for the multi-day celebration.

The game kicks off at 9:10 p.m. at TQL Stadium, the new home of FC Cincinnati in the West End neighborhood.

“We will roll out the red carpet for our neighbors to the south. We hope that everybody has a wonderful time,” Cranley said. “We will be welcoming people from all over the country as part of this sold-out game." 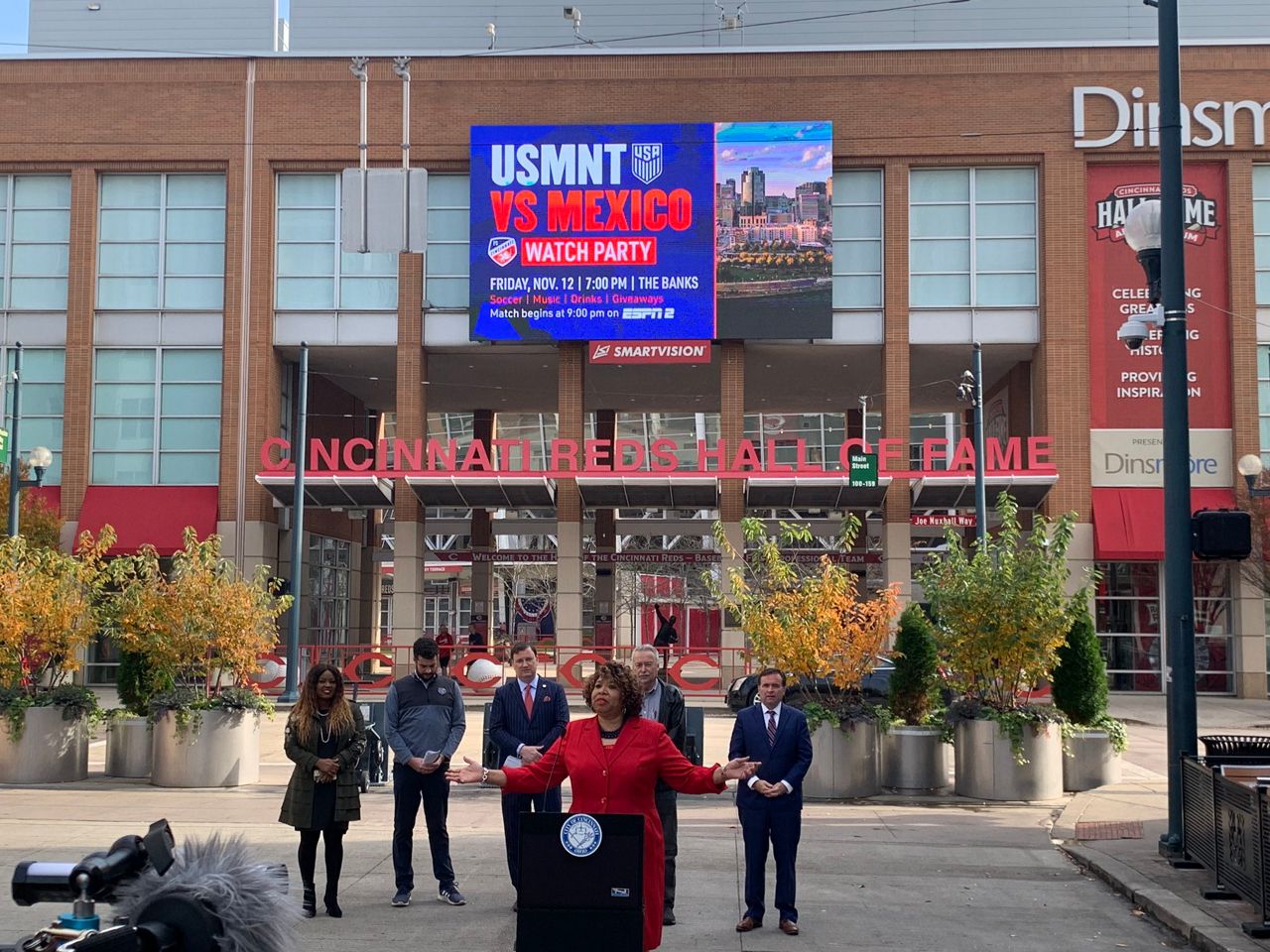 Cranley commented on how far the city has come, calling it "'amazing to think that just a few years ago, there was no actual stadium. There was no FC Cincinnati."

Tens of thousands of fans are expected to come downtown over the course of the next few days to take part in festivities associated with the qualification match for the 2022 World Cup in Qatar.

The teams seek to secure a place in the field. Mexico and the U.S. sit first and second in the top two spots in the CONCACAF, the soccer federation for North and Central American countries as well as those in the Caribbean.

But while both nation's are in a good position, the matchup between the U.S. and Mexico, also known as El Tri, is always hotly contested.

In recent years, the showdown has taken place several times in Columbus, Ohio. The rivalry picked up the unofficial nickname Dos a Cero (Two to Zero) that resulted from the U.S. defeating Mexico 2-0 in several World Cup qualifiers played in Columbus.

The U.S. Soccer Federation selected Cincinnati this time around. While they didn't mention why, the new soccer-specific stadium in Cincinnati has a seating capacity of roughly 26,000, about 6,000 more than Lower.com Field, Columbus Crew's new home.

Berding said buildings in downtown and across the city are being lit in red, white and blue. He asked fans to wear those colors on Friday to show their support.

Friday night's game is sold out. Todd Smith, a representative of the Cincinnati chapter of the American Outlaws U.S. soccer supporter group, said he expects about 35% of the fans in the stands to be from outside Greater Cincinnati. He said people are coming from as far as Hawaii.

"We've got a few people from Maui coming out for the match," he said. "We've heard about people from California, Washington, Oregon, Vermont, Florida. Minnesota. I mean, cities like Chicago, Kansas City, St. Louis, Houston, Dallas. You name it, kind of all over the country."

Fans from Mexico are expected as well. 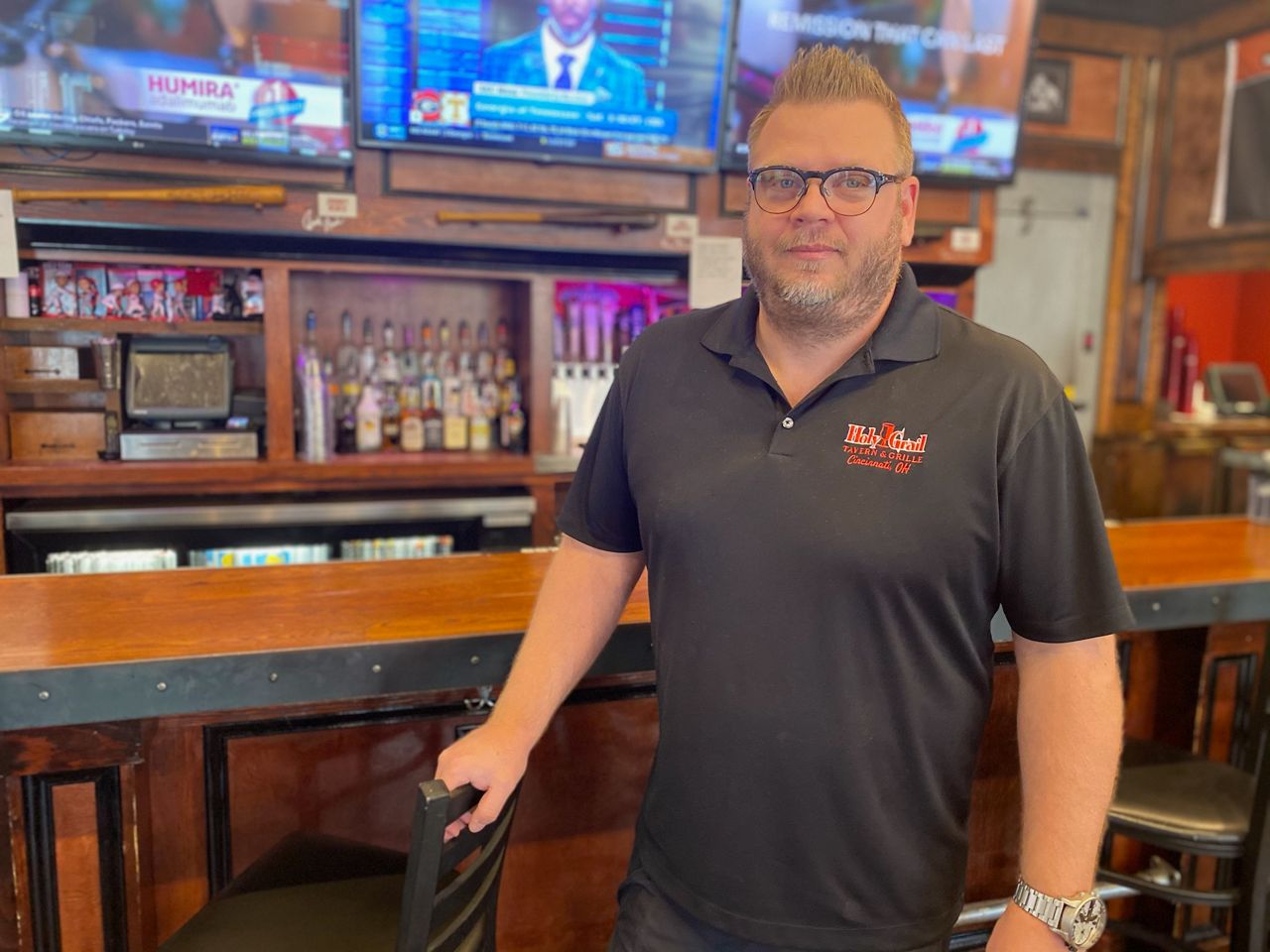 Alfonso Cornejo, president of the Hispanic Chamber Cincinnati USA, said this is a chance to showcase the “Queen City of the Midwest on an international stage.” He said millions will watch on TV and other people are visiting for the game.

The match will be broadcast on ESPN 2 and on Univision. It will stream globally on TUDN.

"As a city, we have a golden opportunity to make a very good impression on a lot of people in this country and around the world," he said, adding that the local Hispanic population is only about 4.2%.

"We are being watched by millions of people in the U.S. and in Mexico. We need to show the world how welcoming we can be," he said.

Julie Calvert, president and CEO of the Cincinnati USA Convention and Visitors Bureau, said there will be a lot of eyes watching on Friday. That includes the FIFA World Cup selection committee. Cincinnati is one of 17 U.S. cities in the running to be a host city for the 2026 World Cup in North America, split between cities in the U.S., Mexico and Canada.

“This is coming at a great time for our region. The hotels are recovering, the bars and restaurants are recovering, so the boost that they’re going to get from this is invaluable," she said.

Tom Sparling, manager Holy Grail The Banks, said he expects an uptick in visitors Friday. A watch party will take place outside his front door.

“Cincinnati loves its sports. When there’s a big game in town, crowds gather. Soccer has really grown in the last few years and anytime Team USA plays, people come down and we get a big crowd here to watch it," he said.

Calvert said hotels downtown are sold out starting Thursday night and going through Saturday. She didn't provide a specific dollar figure, but said the economic impact was going to be in the millions.

“When you bring in folks into downtown, fill the hotels, it starts to have a ripple effect across the region," she said. "We’re looking for a good, healthy weekend economically.”

Fans attending the USA-Mexico match are encouraged to arrive early. Southbound Central Parkway, between Liberty Street and Ezzard Charles, will close as it normally would on an FC Cincinnati game day. However, the closure will start much earlier than usual at 7 a.m. on Friday. There will be "U.S. Soccer festivities" on Central Parkway between 5:30 and 8:30 p.m.

Parking restrictions are going to be in place as well.

Officials reminded those who plan to attend that parking could be a challenge. They advised to consider using a further away parking option and using public transportation, such as the Cincinnati Bell Connector, to get around downtown.

The streetcar will add extra service on Friday. It will run until 1 a.m.

Festivities begin outside around the stadium at 5:30 p.m. The stadium gates open at 7 p.m. A light and pyrotechnic show will start at 8:30 p.m. The game is scheduled for a 9:10 p.m. kickoff.

Fun outside the stadium

There will be a kickoff party Thursday at The Pitch, across from TQL Stadium. The event is seen in part as a welcome party for soccer fans and visiting members of the American Outlaws.

The AO group will host their own events throughout the next few days. That includes a pregame party Friday at Northern Row Brewery and Distillery in Over-the-Rhine before the march to the stadium.

On Friday, The Banks will play host to a block party to offer local and out-of-town fans a chance to pregame.

The formal festivities start at 7 p.m., about two hours before the match gets underway. Beyond food and beverage options in the outdoor refreshment area district (DORA), there's going to be a DJ and prize giveaways.

The USA-Mexico game will be broadcast on the big screen outside Great American Ball Park. Prior to the match, they'll broadcast the University of Cincinnati football game. The showdown with USF starts at 6 p.m.