CINCINNATI — A little rain couldn’t dampen the excitement of the few hundred soccer fans who ventured to downtown Cincinnati on Friday to voice their support of the city’s bid to host part of the 2026 World Cup.

The group gathered outside Paul Brown Stadium to hear from local government and business leaders and representatives from U.S. Soccer and FIFA, soccer's international governing body. It was the conclusion of an afternoon-long celebration at The Banks featuring a mixture of entertainment and food.


Before the start of the media event, there was a parade of 32 flags representing each country that earned a spot in the last World Cup in 2018. The United States flag was absent because it didn't qualify for the tournament.

The visiting party, which arrived earlier that day, included FIFA Vice President Victor Montagliani and the organization's chief tournaments and events officer, Colin Smith. Montagliani is also the president of the regional soccer federation CONCACAF, of which the United States, Canada and Mexico are all members. 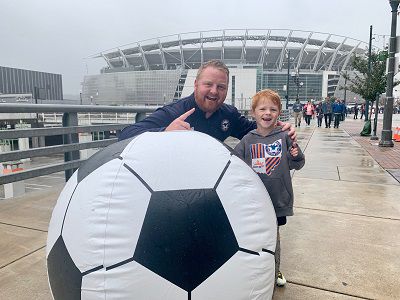 Russell Lewis (L) and his son, Reed, pose for a photo after a World Cup promotion press conference at The Banks in downtown Cincinnati. (Spectrum News 1/Casey Weldon)

"What's been striking to me is the authenticity of your community," he said. He went on to add that the people have demonstrated a true love for the sport.

During the event, he called up a young fan, Reed Lewis, decked out in full soccer gear, including a pair of shin guards and boots. Montagliani called him "what it's all about" and said he's "the future" of soccer.

When passed the mic, Reed let out a simple "Go Cincinnati!”

The public show of support was the conclusion of a day of meetings, tours and conversations about the viability of Cincinnati as a World Cup host site and what that would look like.

The 2026 World Cup will take place across North America, split between cities in the United States, Mexico and Canada. At least 10 of those cities will be in the U.S,. and the rest will be split between the other two countries.

Cincinnati is one of 17 U.S. cities in the running.

FIFA wants to make sure a host city has proper training facilities and sporting venues, but they'll also consider things like the local entertainment options, cultural centers, hotel space and transportation. The tournament will likely attract thousands of visitors from across the globe.

Cincinnati's bid is being run by a local organizing committee, LOC, made up of members from various sectors, ranging from government and business to sports and the arts to civic groups. They created the brand “Soccer City USA” around the World Cup pitch.

Ohio Gov. Mike DeWine and Lt. Gov. Jon Husted were there to greet the travel party at the airport.

"This bid is very exciting and important for Ohio. Having a world class sporting event where the whole world is watching, you can't get any better than that," DeWine said.  "The entire state of Ohio is behind Cincinnati, and we know they would be the perfect host for the FIFA World Cup." 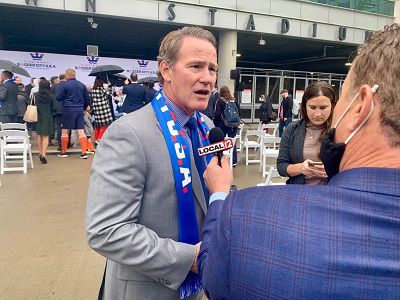 Hosting the 2026 FIFA World Cup could generate 40,000 jobs and $90-$480 million in revenue per city, according to The Boston Consulting Group (BCG), a leading global management consulting firm.

Taylor highlighted that there is no specific "magic formula" for landing a bid. Having the right facilities and resources are important, but landing a hosting bid is about showing that the event will be good for the sport.

“We have great facilities for matches and for training, along with incredible cultural amenities and entertainment options for the fans," he went on to say. "This is also one of the most inviting cities in the world, and I know the community will go all out to make this the best host city in the United States."

Taylor and Kroger CEO Rodney McMullen shared that both of their companies are committed to working with FIFA to promote social responsibility and sustainability through the World Cup.

“Cincinnati has been recognized as one of the greenest cities in America, and Ohio as one of the most charitable states in the nation,” McMullen said. “Our vision for a world with zero hunger and zero waste is powerfully aligned with FIFA’s vision for a Zero Waste World Cup.”

During the visit, the group also took a close tour of Paul Brown Stadium, which would serve as the playing field for any World Cup matches hosted in Cincinnati. TQL Stadium is newer and soccer-specific but is too small for an international audience. TQL Stadium holds only about 26,000 fans, well under the required 40,000 and at least 60,000 for quarterfinal matches. Paul Brown Stadium holds more than 65,000.

A key topic mentioned Friday was the need for partnerships to make this process possible. Husted, Kentucky Gov. Andy Beshear and Indiana Gov. Eric Holcomb attended Friday’s press conference to vocalize their support of this initiative.

They also spoke to the significance of three states and regions that are often competing for jobs and opportunities are now working together on a single cause. 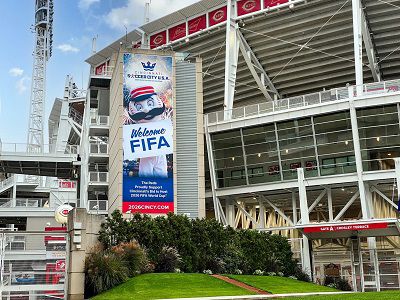 Beshear said the solid turnout Friday in spite of the weather is an indication of what you can expect during the World Cup.

"Rain or shine, we will fill these stadiums," he said.

The group said it has created strategic partnerships with the cities of Detroit, Cleveland, Columbus, Indianapolis, Lexington and Louisville to showcase the sports and hospitality facilities of these Midwest cities.

This regional collaboration will provide FIFA, along with its teams and fans, additional airport and hotel accessibility, including more than 1,800 daily flights from the combined airports and more than 200,000 hotel rooms, per an announcement from the organizing committee.

The final host city selections are expected to be announced in early 2022.