CINCINNATI – There are 20 new recycling cans scattered throughout the Central Business District giving Cincinnati residents and visitors a chance to show their love for the Queen City in more ways than one.

It's a partnership involving the city of Cincinnati and Rumpke, which handles local recycling collection. The empty bottles, cans, cartons and other eligible items collected will go to Rumpke’s Material Recovery Facility (MRF) located on 12 acres in St. Bernard. 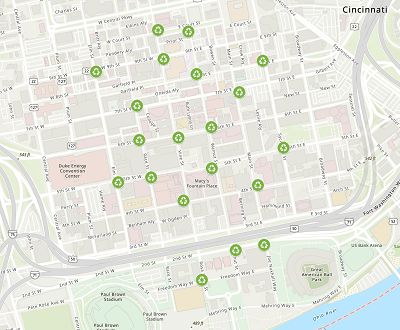 The location of new public recycling bins in the Central Business District.

The MRF is a single-stream recycling facility, meaning all collected recyclables can be combined into a single container and sorted on site. Rumpke recently spent a few million dollars to add four robots to aid in the sorting process.

Rumpke then ships the sorted items to manufacturers that recycle into something new. Those materials get repurposed into everything from packaging to jewelry and apparel.

All of the blue bins have instructions affixed outlining what can and cannot be recycled.

"We’re excited to be expanding recycling options in our vibrant urban core – both for the environmental benefits and also because recycling and litter cleanup help create a cleaner, safer, and more beautiful Downtown Cincinnati for residents and visitors alike,” said David Vissman, 3CDC’s vice president of operations.

3CDC also employs the Downtown Ambassadors, a group of 30 or so full- and part-time employees who patrol streets cleaning sidewalks and alleys. They also provide maps and assistance to visitors.

The 20 recycling bins are dispersed along street corners in all directions of downtown – from up north near Central Parkway to The Banks at the Ohio River. The cans span from Sycamore to Plum streets going east to west.

Each receptacle is expected to collect about 20 pounds of recycling each week or just over 1,000 pounds each year, per Molly Yeager with Rumpke. She said they're expecting these bins to add about 22,000 additional pounds of recyclables each year. 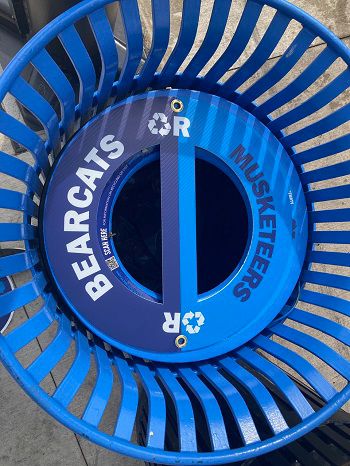 There are roughly 35 recycling bins in other parts of downtown, including parking garages and city parks. But these are the first to be placed in "truly public areas," according to Sam Ujvary, a communications officer with 3CDC. She said crews will check the bins twice a week.

Tuesday's announcement took place a few weeks ahead of America Recycles Day on Nov. 15. To mark that event, various Cincinnati organizations will encourage visitors and downtown residents to recycle as they always do. Though, this year Downtown Cincinnati got a little creative with its marketing this year to add a little extra inspiration.

Many of the cans feature divided lids that feature sets of popular Cincinnati institutions. Would-be recyclers can "vote" for whichever side they prefer. Some head-to-head matchups include Xavier University vs. the University of Cincinnati; Skyline or Gold Star; and Paul Brown Stadium or Great American Ball Park.

Ujvary said they aren't going to keep score but it's "for fun" and personal bragging rights.

One contest that will take place involves local businesses interested in starting a recycling program and obtaining 513Green Workplace Certification. The label recognizes and promotes businesses in Hamilton County that voluntarily operate in an environmentally responsible manner through sustainable actions.

On America Recycles Day, Downtown Cincinnati will pull the name of one of the participating businesses to receive $500 to be donated to a downtown-based charity.

Some local businesses that are already working with Hamilton County Resource to demonstrate their commitment to sustainability include Simply Zero, Rhinegeist and Over-the-Rhine Community Housing, per 3CDC.

Cincinnati has one of the oldest residential recycling programs in the country. For more than 30 years, residents have diverted more than 400,000 tons of material from the waste stream.

Recycling is picked up at Cincinnati homes every two weeks. In 2019, residents recycled 12,851 tons of metal, glass, plastic and paper.

Additional information about recycling in Cincinnati is available at www.cincinnati-oh.gov/recycling.