CINCINNATI – The owner of the trendy bar and restaurant Longfellow has opened a new spot a few blocks south in the heart of the city's Central Business District.

Mike Stankovich's new concept is called Mid-City. The restaurant at 40 E. Court St. is one of the signature tenants of the newly finished Court Street Plaza.

For now, Mid-City will be open Thursday through Saturday, from 5 to 10 p.m. The soft opening was Thursday night.

They got their liquor license five hours before opening, Stankovich said. 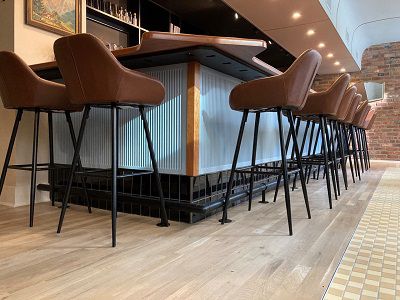 The bar space inside Mid-City, a new restaurant in downtown Cincinnati (Provided)

"The first night went great. We had a lot of people come through, no hiccups, but we're still figuring some things out. We expect to be fully operational next week but until then you'll mostly have beer and wine options," Stankovich said.

Mid-City features a small, regularly rotating menu consisting of items cooked on a plancha, which is a thick metal griddle that has various zones of heat. They also have a fryer.

Stankovich said they'll serve "dishes inspired by regional European classics but with our twist on it." He said Mid-City's chef, Francisco Alfaro, is most excited about one of the desserts.

"He's very proud of his Baked Alaska. It's fernet and mint ice cream on a chocolate cake, and then piped meringue is added to it. It's pretty good," Stankovich said.

When fully up and running the beverage menu will focus on large format drinks meant to be shared with friends. Though, they don't have to be.

The interior is described as "brighter and airier" than its sister bar, Longfellow, in Over-the-Rhine. Stankovich described the décor as "pizzeria-like."

Those familiar with Longfellow know it's an intimate setting at just under 1,000 square feet. Mid-City is about the same size. It has about 40 seats including the patio area. 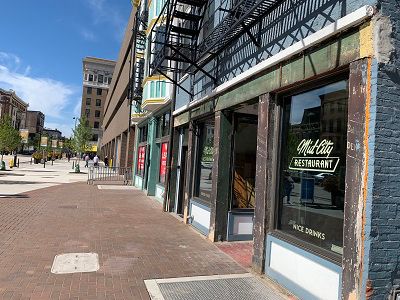 The front room of Mid-City. The area is undergoing renovations for expansion of the new eatery. (Casey Weldon | Spectrum News 1)

"We like intimate, small spaces,” Stankovich said. Though, he mentioned they're going to expand to the Court Street side of the building in the future.

Phase 2, as Stankovich called it, will double the size of the restaurant. They plan to add to the dining room but they'll keep the space flexible enough to accommodate private events and low-key entertainment, like a jazz trio or comedy show.

The restaurant's name is in part tied to the history of the area. The old Mid-City post office on Dalton Avenue is directly west of the site.

Stankovich said they went with a more general name for the eatery to play on the theme that this was a spot in town for people to gather.

"I moved to Cincinnati six years ago now, and I've always just dug the notion of what Court Street used to be,” he said. He mentioned the old market and butcher shops in the 1930s. The space itself was once a cigar shop and later housed a repair shop for butcher equipment.

"I love that history and the vibe there. But to be honest, what really drew me to that space was the breezeway. That plus the romantic idea of the old Court Street made it the right space," he added.

Mid-City's entrance and patio are located in the breezeway. 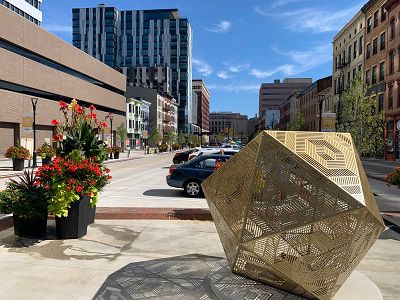 The Court Street area is an important connector between the Central Business District and the Over-the-Rhine. It has been plagued in recent years due to a lack of activity and only a handful of inconsistent businesses, many of which didn't operate at night.

3CDC is renting space to Stankovich for Mid-City.

Mid-City is the second establishment to open in the Court Street Condos development in the past few weeks. Pilar, a Hemingway-inspired bar, opened last month.

There are also several other businesses in the area, including Avril Bleh, which is across the street. There's also Bebo's, a new artisan burger restaurant a little farther down the block.

On the Rhine Eatery, a food hall, is located across the street at the downtown Kroger location.

Joe Rudemiller, VP of Marketing and Communications for 3CDC, said the Court Street Plaza aims to help better connect "OTR to Fountain Square." He thinks this new eatery will reach that goal.

“We think Court Street Plaza has the potential to become a new downtown destination and the addition of Mike Stankovich’s Mid-City is just one more reason for folks to explore this exciting new area," he said.

More information is available at www.instagram.com/midcitycinti/