COLUMBUS, Ohio — Ohio's health orders expire at midnight, bringing an end to the social distancing requirements and the state-wide mask mandate that’s been in effect for nearly a year.

These are the key changes that take effect at 12:01 a.m. Wednesday:

Masks will continue to be required at hospitals, other health care facilities, and on transit since those sectors are expected to continue to maintain their own mask requirements in accordance with  Centers for Disease Control and Prevention guidance.

Mercy Health, the largest health care system in the state, announced Tuesday that it will continue to require masks after June 2.

The state fully reopens as weekly COVID-19 cases have fallen to the lowest levels since June 2020 with seven-day average cases at 566.

It's not clear if Ohio will end its state of emergency on the same day.

The declaration announced in March 2020 allowed Gov. Mike DeWine and other state agencies to access funds and resources they needed to get through the pandemic.

Officials will soon announce whether Ohio will amend its existing health order, or sign a new one to maintain mask mandates in long-term care facilities.

The end of the health orders allows fans of the Cleveland Indians and the Cincinnati Reds at full capacity for daytime home games Wednesday. 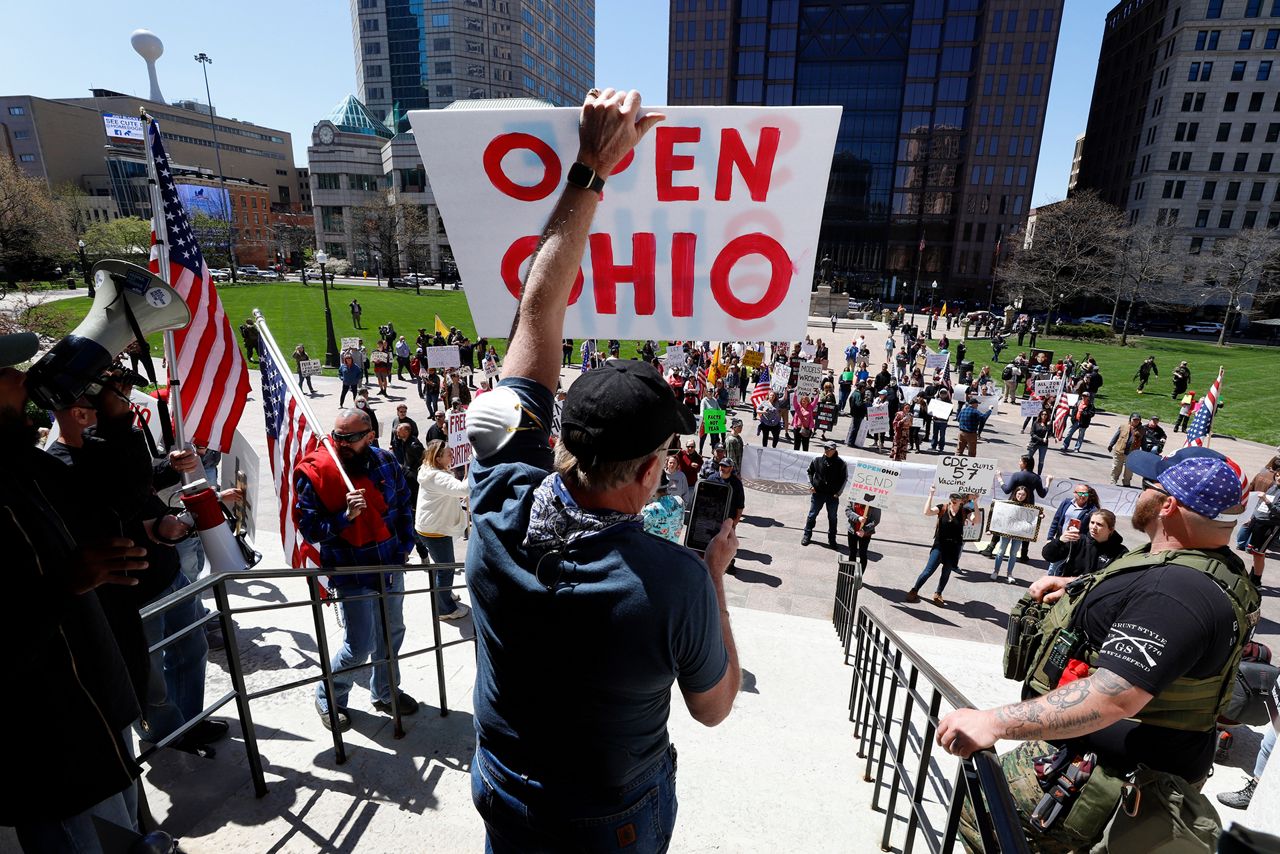 ​Throughout the pandemic, the DeWine administrations has faced calls from conservative groups to reopen the state. This Monday, April 20, 2020 file photo shows protesters gathering outside of the Ohio State House in Columbus, Ohio to protest the stay home order. (AP Photo, Gene Puskar, File)

Among Ohio’s other border states, Kentucky fully reopens on June 11, Indiana on June 30, West Virginia on June 20 and Pennsylvania on June 28 — or when 70% of its adult population is fully vaccinated.

DeWine said, during a May 12 announcement, that the health orders could be lifted due to the progress of the vaccine effort.

In parts of Ohio, residents are required to wear masks after June 2 due to local ordinances, though most major cities have already gotten rid of their mandates or will Tuesday.

Columbus City Council is not expected to repeal the city’s mask mandate until at least June 7, a spokesperson said.

On Tuesday, the state recorded 622 cases of COVID-19, below the 21-day average of 801. Cases were not reported Monday due to Memorial Day. The state reported 702 patients were hospitalized with COVID-19 and 173 patients were receiving treatment in intensive care units.

A bit more than 45% of Ohio's population has received the first dose of the COVID-19 vaccine, whereas almost 40% of residents are completely vaccinated.

Ohio's pace of vaccination dropped to the lowest level since December on Tuesday as seven-day average daily first-doses administered fell to 15,321. The holiday may have impacted the numbers.

Ohio ranks 33rd of all U.S. states for vaccinations started, according to the Mayo Clinic.

Numbers are now down again (per seven-day averages) following a mid-May bump when the 12-17 age group became eligible and the Vax-a-Million lottery was announced.

DeWine said in an MSNBC interview Sunday that many rural areas of the state, where vaccine uptake has been the lowest, saw a significant spike in vaccinations as a result of the lottery, which will award a $1 million prize and a full-ride scholarship Wednesday in the second of five rounds of drawings.

Lydia Taylor contributed to this report.