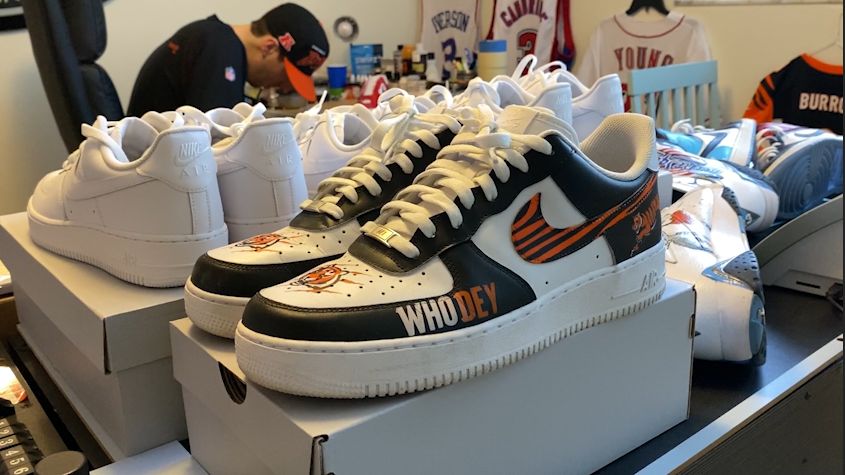 CINCINNATI — The Bengals’ ride to the Super Bowl is creating a lot of opportunities for local businesses, including one student that’s creating some Cincinnati heat this winter.

Mount St. Joseph’s student Devin Young is working on putting the final touches on a custom pair of Cincinnati Reds shoes — something he’s been doing since just before the start of the pandemic.

“Once the pandemic hit, I just kind of took it a little more serious. I started up an Instagram page,” he said. “Started taking over from some of my family members and some people in the community, and it's just kind of blown up ever since then.”

Over the football season, Young is seeing a huge interest from Bengals fans, and even the players themselves, including starting left guard Quinton Spain, who has purchased several custom pairs.

“Right before the season started, I decided to take out a little bit my own money and make a Bengals pair because I was really wanting to show my pride for the Bengals and that pair just blew up on Twitter. And ever since then I've just been non-stop with Bengals fans, even players reaching out to me about getting some stuff done.”

Through the power of social media, Young is growing his custom shoe business. It's something he does on the side, along with being a basketball player for Mount St. Joseph's.

“Once we started up, it was just non-stop between class practice and then making shoes,” he said. “Soon as you finish one order you got another one coming in. So it's just round the clock all the time now.”

Young is a lifelong Bengals fan, so seeing the team make the Super Bowl has been a dream come true.

He’s hopeful to keep making custom cleats and shoes for the team.

“Especially Joe Burrow, if you’re watching this, you wanna reach out we can do something together,” Young said.

Until that happens, he’ll keep bringing the heat.