COVINGTON, Ky. — After relentless rainfall caused flooding across the commonwealth, the state's rivers and waterways are expected to crest Thursday. Covington took some advanced precautions on Wednesday in anticipation of more flooding.


Waterway gates at Willow Run have been closed and barriers are now blocking traffic from Riverside Drive, the city’s Public Works department announced in a press release.

The Ohio River covered parts of Riverside Drive and came close to the floodwall at Madison Avenue on Wednesday. The bottom row of the Madison Overlook floodgate has also been installed.

The good news is that the river isn’t supposed to rise much higher. As of Wednesday morning, it was measured at 55 feet and expected to crest Thursday at 56 feet, according to the National Weather Service’s Ohio River Forecast Center. 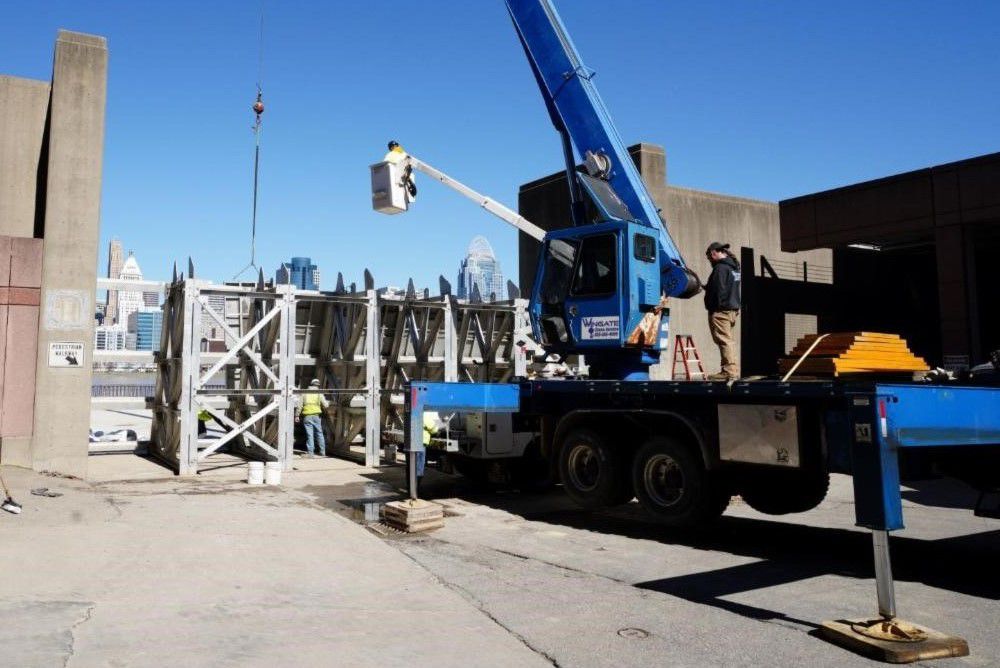 “The river is unpredictable and the forecast has been all over the place, so we’re mostly just being cautious,” Schwenke said. “Thank goodness we’re not seeing the widespread flooding that’s causing such damage down south in Eastern Kentucky.”

Schwenke said about a dozen Public Works crew members worked Monday and Tuesday to put together the many parts of the gate.

On day one, crews installed anchors in the footer holes and filled about 500 sandbags. With the muddy river rushing by on Tuesday, they brought in a crane to lower the A-frame parts and the massive panels that span the gap in the floodwall.

After weeks full of double shifts spent plowing snow and spreading salt, the flood response was just another day in the life of the Public Works Department, Schwenke said.

“The gate has a lot of parts and takes time to put together, but we’re getting fairly quick about it,” he said. “With the weather being what it is, we just stay flexible.”

The Madison Overlook floodgate is one of seven found in Covington, and the first to be installed when the Ohio and Licking rivers start rising. It was erected once last year, once in 2019, twice in 2018 and once in 2015, after not being put up for over a decade.