'Many of them struggled': Teachers reflect on an unprecedented school year

LOUISVILLE, Ky. — Districts across Kentucky are holding the last day of school this week, putting a bow on an unprecedented academic year that saw teachers and students continue to deal with COVID in the classroom and, in some cases, begin to move past it.

To mark the end of the school year, Spectrum News 1 caught up with two teachers — one in Kentucky’s largest school district, and another is a rural part of the state — to talk about a school year unlike any they’ve ever seen.

‘So many kids face obstacles’

Last August, students returned to Jefferson County Public Schools for what the district hoped would be the first full, in-person school year since 2018-2019. JCPS students were still required to wear masks, as were thousands of others across the state, but many were “eager to learn and participate in class after the disruptions of the previous two school years,” said Austin Norrid, a music teacher at Iroquois High School.

For other students, problems created or exacerbated by the pandemic interfered in the classroom. “There are so many students that are dealing with the loss of loved ones to the twin pandemics of COVID and gun violence that many students struggled to focus on school,” Norrid said.

Both issues reared their heads in JCPS this year. First, in September, three students were shot at a bus stop in the Russell neighborhood. Tyree Smith, 16, was killed in the shooting. Then, in January, JCPS turned once again to non-traditional instruction as the omicron variant sent COVID cases, and deaths, soaring in Jefferson County.

By late January, students were back in the classroom and could eventually take off their masks. Even with COVID out of the spotlight, teachers had plenty of problems to contend with.

“I don’t think many people realize that a majority (66.6%) of students in JCPS are considered ‘economically disadvantaged’ by the state,” Norrid said. “So, many kids face obstacles to learning that I never would have imagined before I became a teacher.”

Norris is hoping to help solve some of those problems. Rather than return to the classroom in the fall, he’s taking educational leave from JCPS to pursue his PhD in musical education at Penn State. “Earning a PhD has always been a personal goal of mine, but the issues facing education right now inspired me to pursue it sooner than I might otherwise have,” he said.

Among those issues, Norrid said, is the long list of non-teaching tasks educators are asked to perform. “Our schools are being asked to do a lot for students: Feed, clothe, educate, provide therapy,” he said. “Educators don’t have the training or the resources for all these roles.”

In graduate school, he plans to study ways to support multilingual students in the music classroom and ways to promote racial and social justice.

'Almost back to normal' 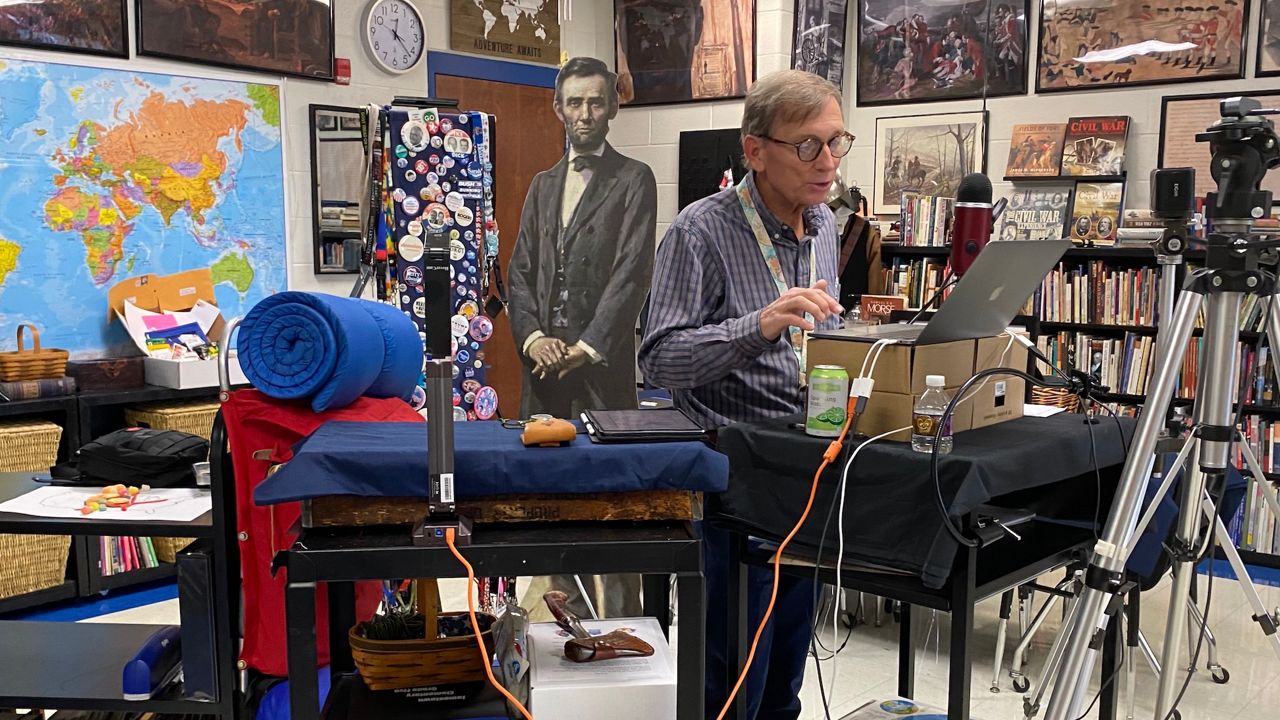 More than 125 miles away from Louisville, in Russell County, Donnie Wilkerson found things were “almost back to normal” in his classroom this year.

“Kids are so resilient and were able to put the pandemic behind them as quickly as it had engulfed them two years earlier,” said Wilkerson, who teaches fifth grade at Jamestown Elementary School. “It was so exciting to see their eagerness to learn.”

Wilkerson does his part to match that eagerness. The ​2011 Kentucky History Teacher of the Year has been known to dress in costume for some lessons and have students dip their hands in ice water while learning about George Washington crossing the Delaware River.

Even with the joys of returning to the classroom, Wilkerson found frustration in the education landscape this year. This winter, he spoke in Frankfort against legislation restricting classroom discussion. Though Gov. Andy Beshear vetoed Senate Bill 1, the Republican super majority in the General Assembly overrode the veto, making it law.

Wilkerson said the legislation “attempts to micromanage the instruction of history in Kentucky schools and will have a chilling effect on the teaching of a balanced progressive view of that history.” His main quibble with the law is language that requires lessons and reading materials to respect “differing perspectives.”

“There are Holocaust deniers right here in my backyard,” Wilkerson told Spectrum News 1 in March. “If I have their students in my class, do I have to have a book that presents their perspective?”

Wilkerson will have to consider the new law when he plans for the next school year, but for now he’s experiencing the bittersweet emotions that come with the end of a school year. “Of course, you’re happy for the anticipated pleasures of summer, but abruptly parting with a group of 10-year-olds you’ve become so attached to evokes an emotional anguish only a teacher understands,” he said.