LOUISVILLE, Ky. — The "Republicans in name only" (RINOs) serving Kentucky in Congress are career politicians and enemies of liberty, who don’t sufficiently support former President Donald Trump, the Second Amendment, or freedom, according to opponents trying to unseat them in the May primaries.

Four of Kentucky’s five Republican Congressmen have drawn primaries from the right, with Rep. James Comer, who has no primary at all, the lone exception.

Several of the challengers claim the "Make America Great Again" mantel and are part of a broad, national trend of Trump loyalists trying to unseat those who have failed to fall in lockstep with the former president.

“We’re seeing a lot of infighting within the Republican Party to define what direction it’s going,” said Stephen Voss, a University of Kentucky political science professor. Trump is at the center of that fight, but the debate is not between candidates who cling to him and those who reject him.

“They all at some level have to symbolically embrace him,” Voss said. “It’s just a question of how vocally pro-Trump you are.”

Many of the Republican primary challengers in Kentucky have honed in on a single issue to illustrate insufficient support for Trump — an incumbent's vote to certify the 2020 election.

Reps. Andy Barr, Brett Guthrie, and Thomas Massie have all been criticized by opponents for failing to support Trump’s effort to overturn his 2020 loss. Hal Rogers was the only member of Kentucky’s congressional delegation to vote against certifying the election, preventing similar attacks against him. But that hasn’t stopped one of his opponents, Gerardo Serrano, from calling Rogers a “true Democrat.”

Some challengers have criticized specific positions from incumbents. Conservative activists Lee Watts, running against Guthrie, and Derek Petteys, running against Barr, have hit the congressmen for voting in favor of legislation supporting COVID-19 vaccinations. Claire Wirth, running against Massie, says the northern Kentucky congressional representative was insufficiency supportive of Trump’s border wall and remains uncommitted to defending those prosecuted for their role on Jan. 6.

“RINO Republicans have sold our country short,” she wrote in a recent Facebook post, using a label that has been applied to several of Kentucky’s Republican Congressman.

The RINO label is familiar to Tres Watson, a former spokesperson for the Republican Party of Kentucky.

In the Tea Party era, he said, people from his end of the Republican party were calling others “RINOs.”

“Now, without changing policy positions, I’m a RINO,” he said. “It just kind of shifts with generations.”

The issue that creates the fault between activists and those they call RINOS changes, too. If it was social conservatism during Pat Robertson’s heyday in the 90s, and government debt in the Tea Party era, it’s fealty to Trump now.

“This is a long running theme of Republican primaries,” Watson said. 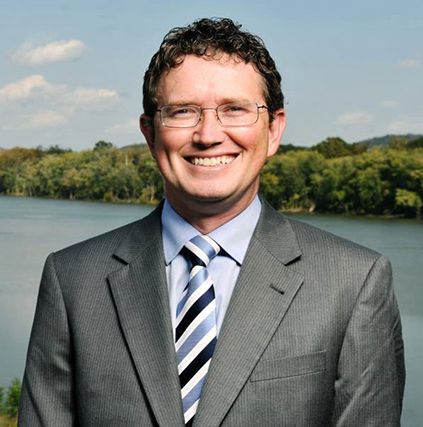 Rep. Thomas Massie has been called a "Republican in name only" despite being one of the most conservative members of Congress. (Thomas Massie)

The RINO critique is also useful when challengers can’t find much daylight between their positions with incumbents. “On the social and cultural issues that launched the Trump movement, they’re all basically the same,” Voss said of the Republican incumbents and their challengers.

That incentivizes Republican challengers to emphasize the differences that do exist, including perceived loyalty to Trump or, in some cases, a bombastic, Trump-style approach to politics.

But that might not be a wise approach in Kentucky. Voss said, the “thumb in your eye” approach to politics rarely plays well in the commonwealth, despite Trump’s popularity. The relatively reserved style of Kentucky’s sitting congressmen is a testament to that.

In the end, Watson said, each of Kentucky’s Republican incumbents will probably hold on to their seats. Not just because of the all the advantages that typically come incumbent — from money to name recognition — but because many of the challengers seem to living in a social media universe that doesn’t reflect the reality of winning elections.

“We, in the political world, get all ginned up when we see a lot of activity behind one of these challenger candidates, but the reality is, that’s kind of a facade,” he said. “The backing of broad base, rank-and-file voters that you need isn’t going to be there.”