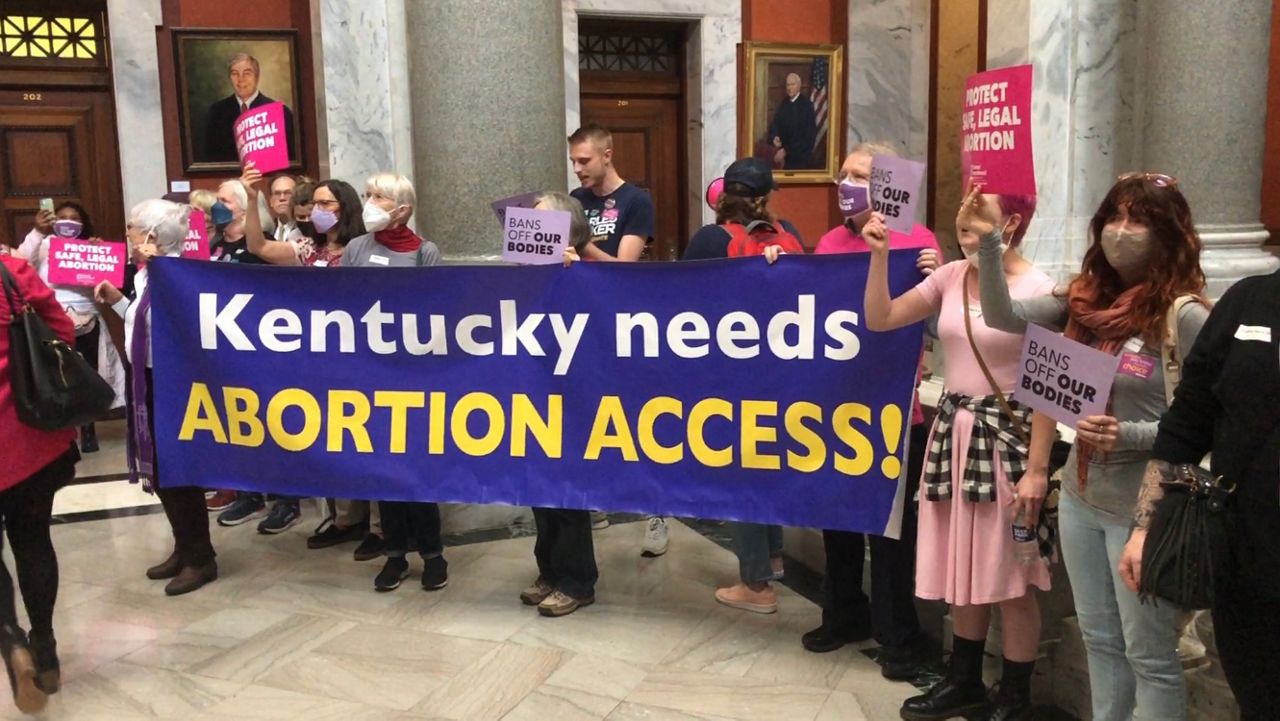 FRANKFORT, Ky. — With only two days to go before Kentucky lawmakers have to adjourn for the year, they spent most of the day Wednesday overriding Gov. Andy Beshear’s vetoes of several pieces of legislation.

The series of bills included House Bill 3, a measure restricting abortion in multiple ways, including limits on mail-order abortion drugs, more rules for minors that seek an abortion, more regulations for abortion providers, and a ban on the procedure after 15 weeks.

Supporters of Planned Parenthood protested outside the House and Senate chambers as lawmakers gave final approval to the bill.

The scene outside the House right now as abortion advocates protest the expected veto override of HB 3, the abortion omnibus bill. pic.twitter.com/aNW7bcSDTZ

Planned Parenthood and the ACLU plan to file a lawsuit against the legislature to challenge House Bill 3 in court.

“The Kentucky legislature was emboldened by a similar 15-week ban (in Mississippi) pending before the Supreme Court and other states passing abortion bans, including in Florida and Oklahoma, but this law and others like it remain unconstitutional,” Brigitte Amiri, deputy director of the ACLU Reproductive Freedom Project, said in a statement. “We urge the court to block this law immediately and ensure that people in Kentucky can continue to access abortion care.”

Supporters of the measure said they want to limit abortion as much as possible.

“This is a stain upon our country. It’s our greatest sin,” Sen. Stephen Meredith (R-Leitchfield) said. “It needs to be reversed.”

Most Democrats voted against it.

“It’s a slap in the face,” Rep. Mary Lou Marzian (D-Louisville) said. “It’s insulting to Kentucky women and their families.”

Lawmakers voted to agree with several of the technical changes made to the main budget bill by Gov. Beshear, but decided to keep some of the more contentious things, including some measures dealing with the governor’s authority.

Here’s more on the changes in the budget bill from the House clerk https://t.co/l0QT4RcGuP pic.twitter.com/bpw1rakrDT

Lawmakers approved new rules for public assistance, including a potential work requirement for Medicaid, limits on what kind of food Supplemental Nutrition Assistance Program (SNAP) benefits can be spent on, and new penalties for people who sell benefit cards.

Democrats argued the bill will pull food away from people who need it the most, and will ultimately cost more to implement than it will save.

“It is shameful that as one of the poorest states, we make this worse by going after the poorest people in Kentucky,” Rep. Pamela Stevenson (D-Louisville) said.

Lawmakers overrode the governor’s veto of a bill cutting the state income tax by a half-percent if the state brings in a certain amount of revenue, plus a series of new taxes on a number of services, including ridesharing services like Uber and Lyft, and new taxes on electric vehicles.

Charter schools became legal in Kentucky in 2017, but none have gotten off the ground. House Bill 9 provides a funding mechanism for charter schools — allowing SEEK dollars to follow students to the schools — while requiring a charter school in Louisville and Northern Kentucky.

The vote was close with many Republicans joining Democrats in opposing the bill, with many from Louisville and Northern Kentucky stressing that their communities don't want the bill to pass.

“What we’re doing to public schools with this bill is atrocious,” Marzian said.

Senate Bill 1 limits the power of SBDM councils over school hiring decisions, but lawmakers added another bill dictating how schools teach about history and racism, including a list of documents that includes a political speech by Ronald Reagan in 1964.

Opponents of the measure noted it could open teachers up to potential criminal prosecution, but Wise said that specific part of the bill will be fixed.

Trans girls in grades 6-12 and in college won’t be able to participate in girls sports under Senate Bill 83, a bill supporters say is designed to maintain the integrity of women’s sports.

“This is a huge win for the integrity of women’s sports and with the inevitable enactment of Senate Bill 83 into law,” Sen. Robby Mills (R-Henderson) said. “Kentucky is a leading voice for female athletes across the nation.”

University of Kentucky swimmer Riley Gaines, who finished behind transgender swimmer Lia Thomas in an NCAA championship event last month, spoke in support of the measure after the Senate vote.

"We — and when I say we, I mean the majority of female athletes — want all people to be able to live as they choose and to be treated with respect,” she said. “But we cannot ignore the biological and anatomical differences between males and females."

Sen. Robby Mills is calling for an override of the governor’s veto of SB 83. It bans transgender girls in 6th-12th grades from playing girls’ sports and transgender women from playing on college women’s teams. @SpectrumNews1KY pic.twitter.com/yZZEbb3Tja

Many Democrats opposed the bill, claiming Republicans want to score political points by outlawing something that isn’t an issue in Kentucky.

“It doesn’t fix a problem,” Rep. Patti Minter (D-Louisville) said. “Whether you think it’s a problem or not, it does not exist in Kentucky, but the damage you’re doing to children is real.”

Senate Bill 216 includes several new election regulations designed to make them more secure, including a move to all paper ballots by 2024.

“This new law expands our post-election audit process; places our voting machines under video surveillance during non-voting hours of election periods; and accomplishes full transition to paper ballots during my term of office,” Secretary of State Michael Adams said in a statement thanking lawmakers for overriding the veto. “These common-sense reforms will improve not only our election process, but also public confidence in our elections.”

“Without quarterly reports, candidates will be able to draft bills and serve on interim legislative committees while receiving donations in secret,” his veto message said.

Louisville merged with several of the surrounding towns in Jefferson County to form Metro Louisville about two decades ago. House Bill 314 creates a process where residents of certain unincorporated areas can create a new city.

Republicans who supported the measure say it’ll help some of the neighborhoods get better city services, while Democrats worried it will mean less money for Louisville.

Lawmakers voted to give themselves pay raises in the legislative budget similar to what state employees will receive in the executive branch budget, but Gov. Beshear said their overall compensation is much more than the average Kentuckian. The Republican majority overrode his veto.