What Amtrak's return would mean to Louisville

It was the 1960s and Union Station, at 10th Street and Broadway in downtown Louisville, was a vital transportation hub at a time when air travel and interstate highways were in their infancy.

“Union Station was quite the place,” said Owen, who remembers a restaurant, barbershop, and bustling newsstand inside the building that now houses offices for Louisville's public bus system.

Owen’s childhood memories are a far cry from the modern era. In the more than half century since the 1960s, passenger rail service has disappeared and returned to Louisville multiple times. For the past two decades, Louisville has been one of the nation’s largest cities without Amtrak service. But that could soon change.

This summer, Amtrak proposed a vision for its future that would bring passenger rail service to 160 new stations, including one in Louisville. The plan would see Louisville connected to Chicago, via Indianapolis, with four daily round trips, each taking five hours and 45 minutes.

Making that vision a reality hinges on the passage of President Joe Biden’s infrastructure bill, which the Senate approved in a 69-30 vote last month. The bill, which has yet to be taken up by the House, would send $66 billion to Amtrak, marking what the White House calls the “largest investment in passenger rail” since the agency’s creation in 1971.

It would also mark Amtrak’s return to Louisville after a hiatus that began in 2003. That’s when service on the Kentucky Cardinal, which connected Louisville to Chicago, ended. It was a brief run that had only begun in late 2001. Prior to that, the Floridian ran from Chicago to Miami, with 32 stops along the way, including Louisville and Nashville.

Bringing passenger service back to Louisville would connect millions of people and dozens of companies in the region, Amtrak says on a website touting its vision for the future. It would also provide another mode of transportation in an increasingly congested city with “significant environmental and equity challenges,” Amtrak says. 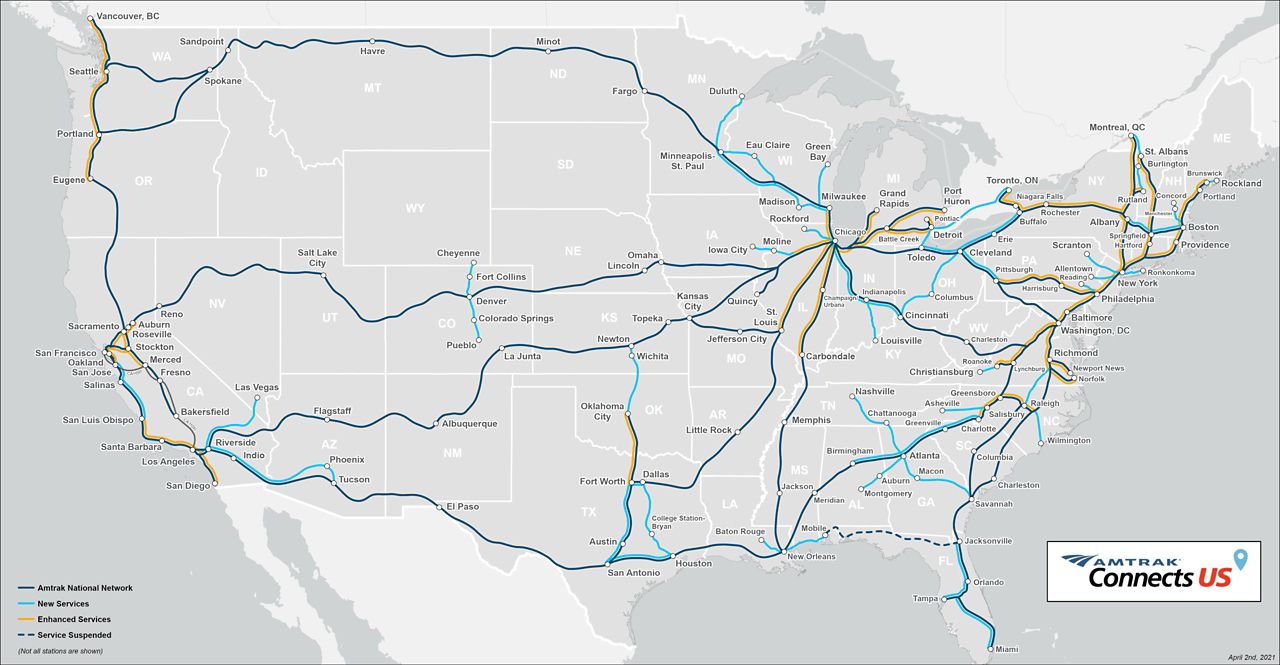 Amtrak's new vision for rail travel in the U.S. (Amtrak)

Rebecca Wood, the Chief Operating Officer of Greater Louisville Inc, the city’s chamber of commerce, said Amtrak would be a boon to business interests.

She said providing the millions of people in Chicago and Indianapolis with easier access to Louisville could bolster “some of our signature industries like tourism and hospitality.”

“It will also give current residents new options to travel to neighboring cities and further connect Louisville with the rest of the country,” she said.

Louis Johnson is one of those residents. The Louisville resident has ridden passenger trains in Europe, China and around the U.S. He is especially fond of an Amtrak trip he took between Seattle and Portland.

“It was far more pleasurable than driving and about even in expense,” he said. “And it was more convenient than flying. We were picked up and dropped off in the center of each city. The train was fantastic, the views were incredible, and you could work, read or just watch the landscapes.”

As a frequent traveler he said he’d love to see Amtrak come to Louisville. “Being able to hop on a train and be in downtown Indy or Chicago would be incredible,” Johnson said.

And as an urban designer with an interest in public transit, he thinks increased rail travel would provide societal benefits.

“I think we need to offer many more ways for people to move around our cities and country,” he said. “Highways and roadway bridges are incredibly inefficient when compared to rail. We need to be creative with how we create more capacity for people to move. Regional trains like Amtrak are one incredibly efficient and sustainable way to do that.”

Despite his own love for rail travel, Owen remains somewhat skeptical about Amtrak’s proposal to come back to Louisville. He feels burnt by the way Amtrak abruptly left the city in 2003, after the city invested nearly $400,000 to bring passenger service back to Union Station.

“What happened with Amtrak in Louisville was a terrible situation,” Owen said. Service on the Kentucky Cardinal line was canceled in 2003, less than two years after it began, with Amtrak citing a lack of ridership. But as the Associated Press reported at the time, it was hardly a desirable ride. At the end of its run, the train left Louisville at 9:20 p.m. and arrived in Indianapolis at 2:30 a.m., traveling 30 miles per hour along the way. There was also no sleeper car and no food service.

This time around, Owen's primary concern is over Amtrak’s proposed new route plan, which would establish service between Nashville and Atlanta. But just like the last time Amtrak came to Louisville, it would not link the city to Nashville.

"Chicago to Nashville would be one hell of a market," Owen said. “What Amtrak is proposing this time around is just as blind as last time."