'If the creek is up, I'm dead': The human toll of Kentucky's infrastructure woes

OWEN COUNTY, Ky. — In some ways, Stephen Lathrem feels lucky that the massive heart attack he suffered a decade ago hit when it did. “If I'd had it the next day, I wouldn’t be here talking to you,” the 64-year-old told Spectrum News 1.

Lathrem’s home sits on land in rural Owen County that his family has owned for a century. The only way to access it is a crumbling asphalt slab that becomes impassable after a couple inches of rain cause Indian Creek to swell. That’s what happened the day after Lathrem’s heart attack.

“My wife couldn’t get to the hospital to visit me because the creek was so high,” he said.

Lathrem is one of nine people who depend on the low-water crossing to get to and from of their homes. His 84-year-old aunt, who relies on him to cook for her, is another.

Over the years he’s seen cars swept off the slab, walls of water rush down the creek burying it, and tons of rock grid off its surface. “It’s kind of like getting sandpapered,” he said.

Lathrem has missed countless days of work when the high water keeps him at home and he’s been forced to sleep at a hotel when it won’t let him return to his bed.

The low-water crossing on Indian Creek Road is one of the many roads and bridges in Kentucky that have fallen into disrepair, resulting in the American Society of Civil Engineers giving the state a C- grade on its most recent infrastructure report card. The problem is especially acute in rural parts of the state, where the fatality rate on non-interstate roads is roughly two and a half times higher than it is on the state’s other roads.

This is one of the many problems the Biden administration hopes to address with the Infrastructure Investment and Jobs Act, which the U.S. Senate passed last month. The House of Representatives still must approve the legislation before President Biden could sign it into law. If he does, the bill will result in major investments in more than just roads, allocating billions to passenger rail, wastewater and drinking water infrastructure, and high-speed internet.

If the bill becomes law, Kentucky will see more than $5 billion for highway and bridge repairs. “The historic Infrastructure Investment and Jobs Act will make life better for millions of Kentuckians,” the White House said in a fact sheet.

Lathrem said the potential for billions of dollars to flow to Kentucky to fix roads like his gives him “a little bit of hope.” But Owen County Magistrate Chad Rose plans to get the job done before that help has a chance to arrive. 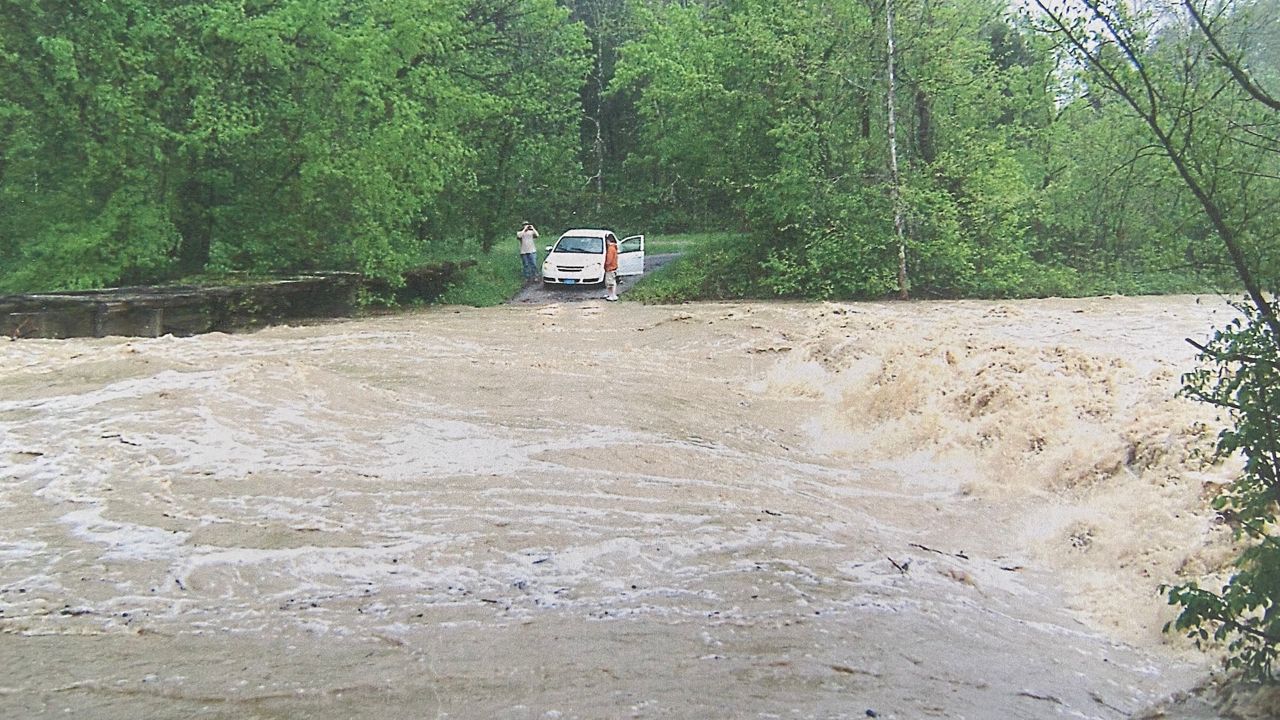 Rose has made it a personal mission to get help to those living on Indian Creek Road, lobbying state legislators to invest in infrastructure projects and working with County Judge Executive Casey Ellis to find funding to repair the crossing.

“A lot of times when legislators are legislating, they tend to forget the human side of things,” he said. “There are real people that live on the other side of that slab.”

Ron Holland is one of those people. The 76-year-old lives less than a mile past Indian Creek and has suffered three heart attacks.

“I’ve had the ambulance up here quite a few times,” he said. Paramedics tell him the crossing is one of the worst in the county. “If the creek is up, I’m dead,” he said.

Holland’s concern is about more than himself though. He’s also worried about the next generation. Both he and Lathrem have sons who live on the other side of the creek and they want them to be able to stay there.

That could become increasingly difficult as the warming climate causes more rain to fall in Kentucky. Climate experts say that surging precipitation and the flooding that often follows is one of the primary manifestations of climate change in Kentucky. And the rains have already arrived. Just in the past decade, Kentucky has seen five of its 10 wettest years on record.

For now, the hope is to spend roughly $100,000 to top the slab with with two feet of asphalt and to add more culverts beneath it, allowing the creek to more easily pass under without surging over. But Lathrem knows that if his family is to remain on the land they’ve occupied for more than 100 years, it’s going to take even more than that.

“The great thing that could be done is to build a bridge that is about 10 to 12 feet high so that water could pass under,” he said. “That would be the right thing to do for future generations.”