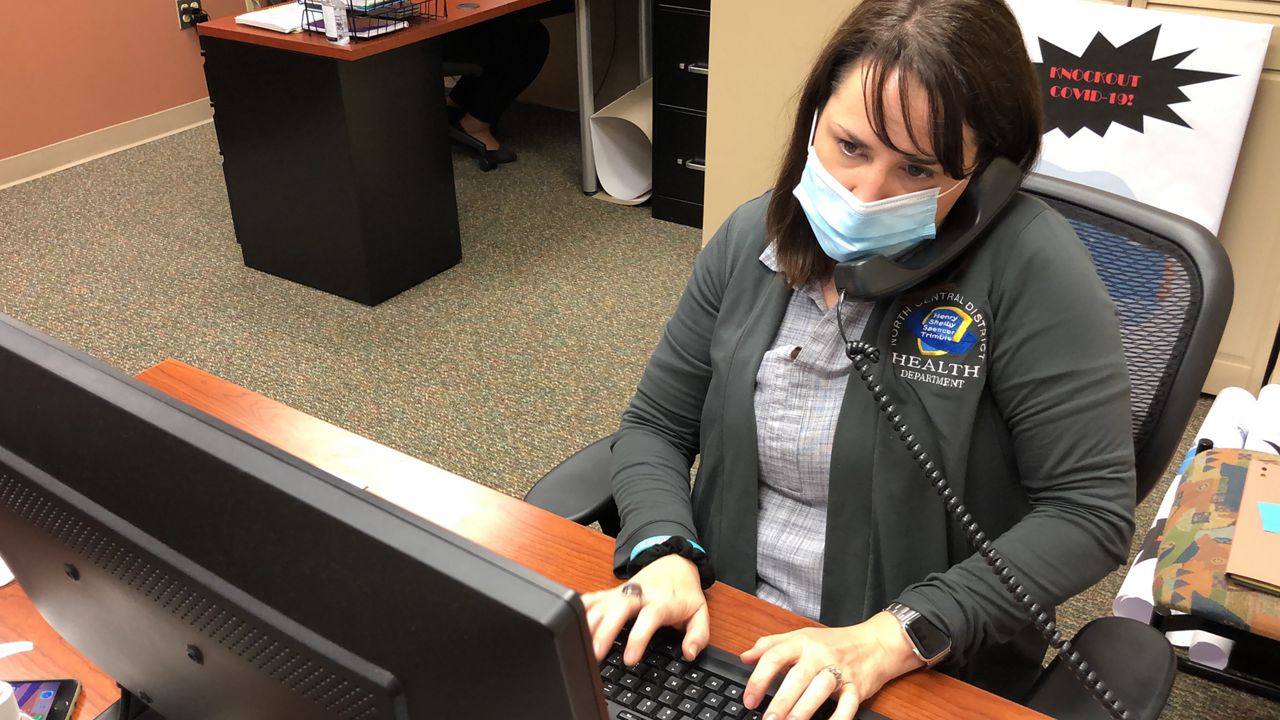 A staff member is on the phone helping community members with vaccine education.

LEXINGTON, Ky. — Spencer County has the lowest amount of people vaccinated in Kentucky.

The county has a population of more than 19,000 people and the Centers for Disease Control and Prevention (CDC) is reporting only 14% of the population, or about 2,000 people, have been vaccinated.

The North Central District Health Department, which oversees Shelby, Spencer, Trimble and Henry counties, is ramping up efforts for COVID-19 vaccination education in hopes of increasing the number of people getting vaccinated.

“When we first started the hotline, it was thousands of calls a day. We all had to be in a big room together and it's all we did,” said Keila Mendez, a community outreach staff member.

Mendez spends much of the workday talking on the phone while educating or booking COVID-19 vaccine appointments.

“It was just so much coming in but now it's kind of tapered off just because so many people have already gotten the vaccine, there's so much information out about it. People have already made up their minds. We still get a few phone calls throughout the day but it's nowhere near as much as it was before,” Mendez said.

Health officials said the slowdown in vaccinations is due to a combination of factors.

“I think there's a little bit of fear of the vaccine,” said Roanya Rice, public health director at the health department. “There's misinformation that circulating, vaccine hesitancy and then I think there are a few people who just decided, personally, they're not going to take the vaccine.”

Rice said the issue isn’t about access. She said in January, they hosted a drive-thru model to offer vaccines, and in March, they’ve offered vaccines in a centralized location in Shelby County.

“As the interest is dwindling in the vaccines and an effort to try to increase the vaccine rates in the counties, we've now moved those vaccines back into the health department,” Rice said.

“We have developed a campaign called Vaxmewhy and the purpose of that campaign is to better educate,” Rice said.

In addition, Rice and her team in Spencer County and the EMS are hosting a pop-up clinic later this month.

“We hope to reach people that may be working through the day. That'll give them a late afternoon opportunity to get the vaccine,” Rice said.

The health district said starting this month every Thursday they have vaccine clinics in all four of their counties.

They are also in the process of partnering with school districts to vaccinate the younger population with parental permission.