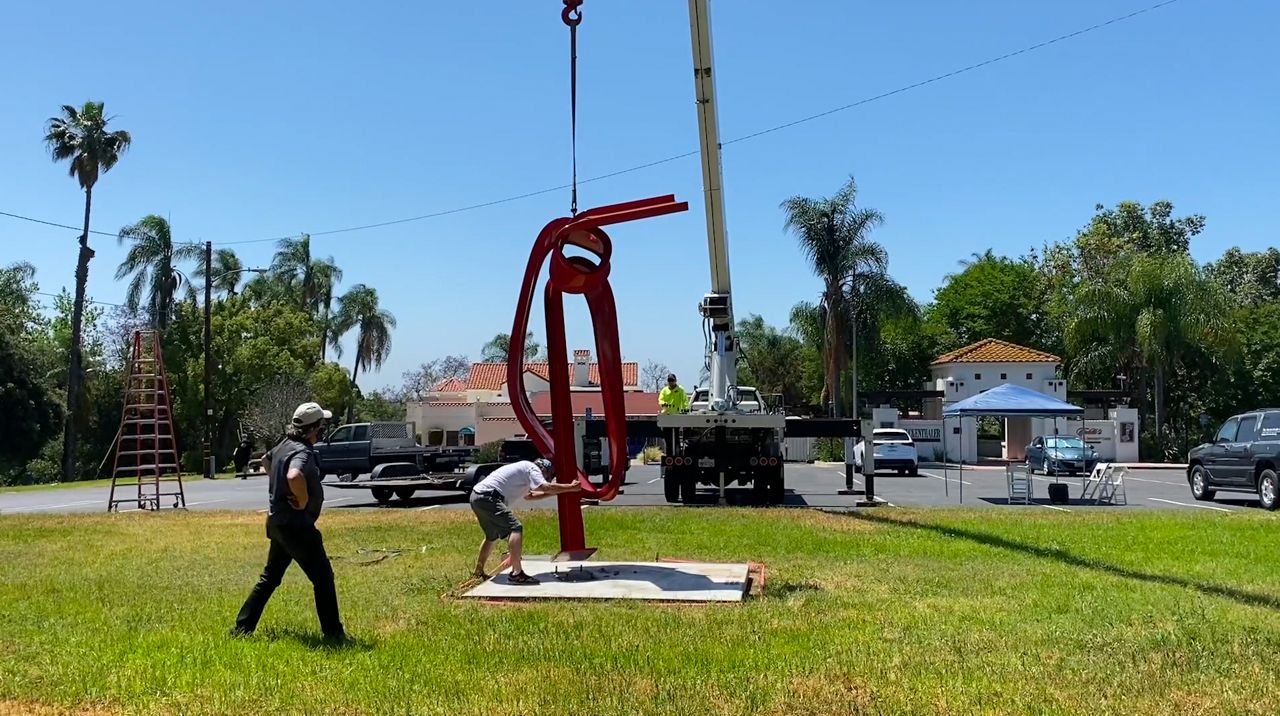 FULLERTON, Calif. — Waiting in quarantine makes everyone question life as we know it. When will it end? Will the world ever go back to normal?

Sculptor Bret Price doesn’t have the answer, but he believes his 12-foot metal sculpture titled Godot could provide some relief.

“We need a diversion of this dilemma that concerns us all,” said Price.

The artist says he was planning to go pre-med when he was a senior at Pomona College, but dropped his major after he took a ceramics class. He says one of the reasons why he did that was because of something his dad, Harrison “Buzz” Prize, said to him when he was just 8-years-old.

“He didn’t care what I did when I grew up as long as I got up in the morning and wanted to do it,” said Price.

His bright and massive sculptures have been displayed in many different cities over the years. One he did will be on display at the Muckenthaler Cultural Center in Fullerton for a year. Foot traffic at the Muckenthaler has quadrupled since the social distancing order was mandated.

Price finds the inspiration for the names of his pieces while he melts, rolls and bends heavy metal until he feels like they’re complete. Looking at the piece that went on display in Fullerton, Price saw an abstract face that looked thoughtful and introspective which reminded him of Samuel Beckett's existentialist play, Waiting for Godot.

Indoor art off limits? No problem - we’re bringing the art outside! Internationally renowned Orange County artist Bret Price installed the first piece in The Muck's new sculpture garden today. His work has been described as "existing somewhere between physics and magic." Now, we invite you to stroll our grounds and experience the magic for yourself! Godot, 2007 | 12 ft. height | Bret Price @bretpriceartist #bretprice #muckenthaler #orangecountyart #orangecountysculpture #fullertonart #sculpturegarden

“There was this kind of random unresolved continuance that was going on in that play that I just at the age of 21, thought was wonderful,” said Price.

The story revolves around two characters who anxiously wait for a man named Godot who never arrives.

Godot is the center’s first piece in its sculpture garden. The goal is to give people who are walking by a moment of peace as the sculptures take their minds away from this uncertain time.

“Getting couped up in the house all day, it gets pretty boring and people need a release so I think the bright color of this new sculpture is really going to cheer up the place and hopefully bring some happiness to people,” said Tom McDonnell, longtime Fullerton resident and chairman of the Muckenthaler Cultural Center’s vintage car show.

Price says he’s thankful that his work gets seen and that each of his pieces inspires people to let their thought process take them to a place they’ve never been before.

While the two characters in that play waited for Godot to come, this Godot showed up and will stay for a year.

For more information about Bret Price, visit his website.

You can also visit the Muckenthaler Cultural Center online.