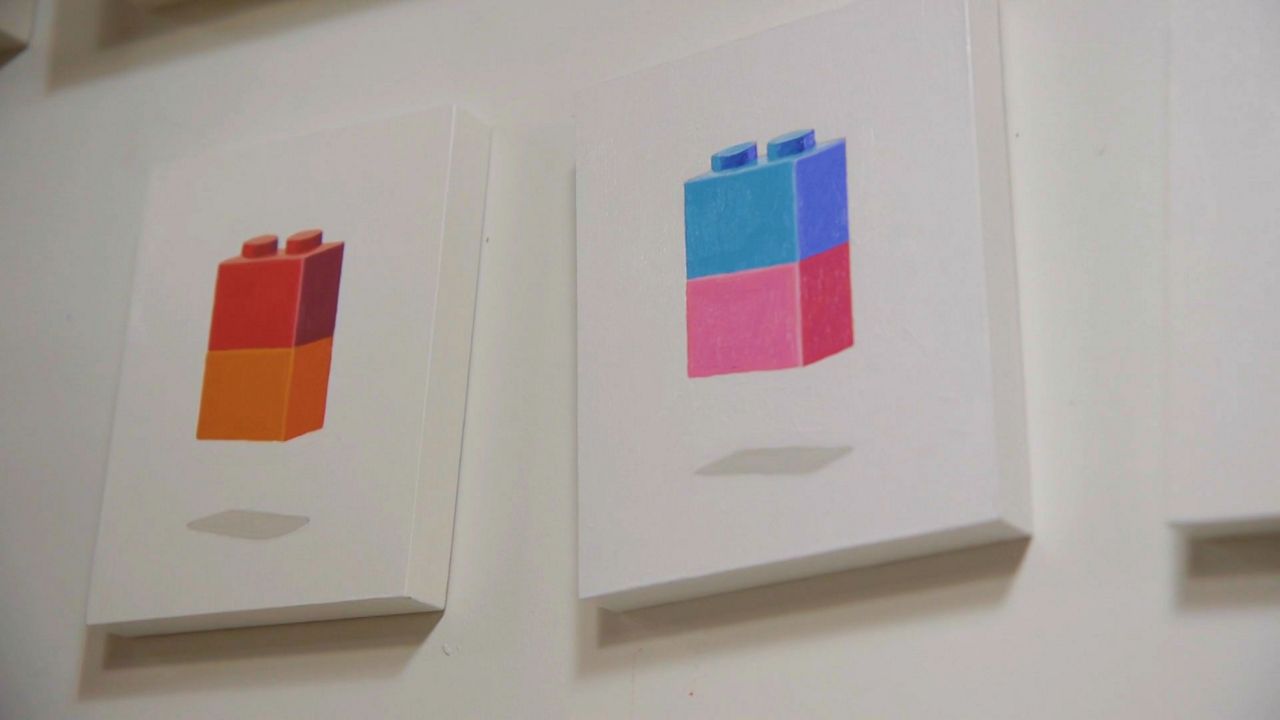 LA Artist Uses Legos to Inspire and Give Back

LOS ANGELES – “Whatever’s happen outside, whatever stresses I have, whatever anxieties I have, just kind of dissipate. And all that matters are the colors I’m putting next to each other on a paint brush."

Jimmy Danko is a professional artist who has been painting for over 20 years. He grew up in Wisconsin, but has lived in L.A. for nearly a decade. Now, the Arts District resident faces more than just a creative road block.

“The path of an artist, there’s a lot of uncertainty sometimes. It ebbs and flows, and sometimes you’re doing awesome, and sometimes you’re not sure how you’re going to keep the lights on" says Danko. "Coming to studio in those first few days, after the talk of the pandemic and those things, I had to think about how was I going to work through this time.”

Danko turned to pop culture and nostalgia for inspiration, as he does with much of his artwork. But his current project also had a deeper connection to our current time.

ART: The Hulk color combo has been the piece I’ve been shipping out the most. Per request, and in keeping with the superhero theme, I added another one to the list that’s inspired by Ironman and the og Daredevil outfit. (link in bio to order) I think a Superman/Wonder Woman combo may have to happen soon. THOUGHTS: I don’t have much to add to the convo today. Routine has been my guide from one month to the next. I’m up everyday before the sun and have been finding regular solace in my morning workouts, hours in front of the easel and the daily heaping of laughs provided by @curiousgeorgianna. Podcasts and music have been the input of choice, although there’s a stack of books I’m slowly chipping away at too. Of course I would be remiss if I didn’t mention @rickandmorty ! They finally dropped a new episode. More of that please @justinroiland and @danharmon! Anyway, I’m holding it down in LA, and hope you’re all doing the same wherever you’re at. More art and ramblings soon! #stayconnected #cantstopwontstop #adaptandovercome #makeart #lego #supportartists #supportthearts #artsdistrictla #losangeles #ironman #daredevil #marvel

“The first thing that came to my mind was Lego pieces. And the reason why that clicked right away was like, the Lego pieces connect together. That’s something that we’re trying to do with everyone around us, but in a way that we’ve never done it before on such a big scale. Like connecting to people without actually physically being close to them," said Danko. "I’ll be setting up to photograph for the painting, and 20 minutes later I found myself just building random things with Legos… instead of actually doing the work.”

But Danko has put in plenty of work. Fulfilling over 40 recent orders on his website, for his new timely project.

“So the name of the piece is ‘Stay Connected.’ I wanted to be a reminder on multiple levels, to stay connected, to stay grounded. But also something that’s very light hearted, that you can look to and you still have a smile on your face,” said Danko.

Danko is putting smiles on many faces by donating a portion of the proceeds to Feeding America. A group that aims to end hunger nationwide.

“Not only is this reaching out to people and connecting them, but then there’s this other positive aspect, that’s going out in to the world and helping people through this time as well. It’s great to come here and sit in front of the easel and paint, but ultimately I think most artists want their work to touch people,” Danko said.