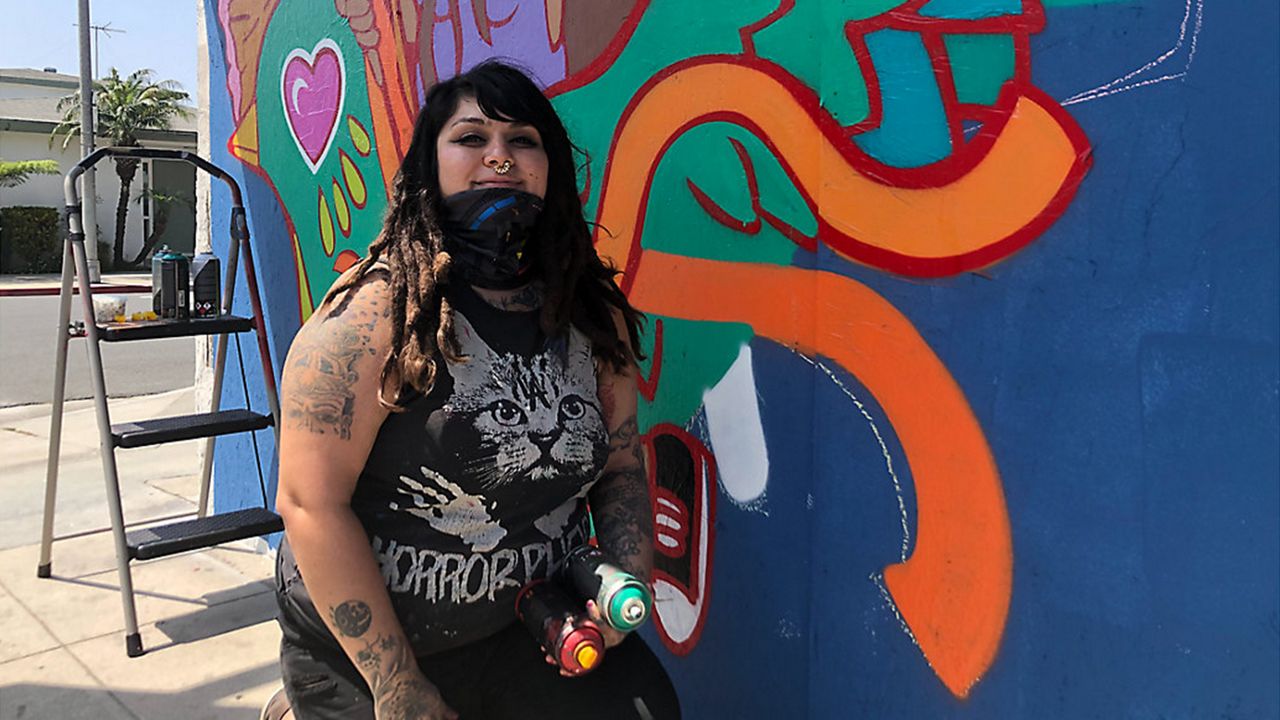 LONG BEACH, Calif. – Armed with only a spray can, artist Nuria Ortiz, known as “Ms. Yellow,” is taking on the boarded-up buildings of Long Beach and making them beautiful.

She says she’s “just basically trying to turn a depressing situation into something that’s a little more positive, trying to have that cup half full mentality.”

Boarded up buildings became a common site amid the COVID-19 pandemic, which is one of the reasons the Long Beach Mayor and City Council reached out to the Arts Council for Long Beach. Together they launched "COVID Coverup," a program to not only beautify boarded-up buildings, but to uplift the community.

This is one of several city-wide projects Ortiz has been involved in.

For her, art is a passion she inherited from her father, also an artist, who began his career in Mexico.

Her artwork is now showcased around the world, her adopted name, a tribute to the color that began her obsession with colors in general, and . . . a nod to one of her favorite filmmakers.

"In high school, me and my friend were really obsessed with Quentin Tarantino, so hence, Reservoir Dogs. They had a bunch of characters with Mr. Blond, Mr. Pink, so my friend Candice was Ms. Green," Ortiz said. "I was Ms. Yellow, and I’ve had that name ever since. People still call me that.”

Her latest artwork is called “We Got This.” It depicts a woman on a colorful bird.

It’s a mural she hopes will offer inspiration and a sense of comfort during this pandemic.

Completed panels at #TheBrit for #ProjectCovidCoverUp commissioned by @artslb 💛💛💛 Worked at night in the rain, it was really nice. I created 2 stencils for this piece. One was 2 layers, the other was 15 layers (hell yeah that was a nice challenge tbh). The wall didn't get wet so I was able to keep going. Got it done in a few hours, by 1:30 am . Sam was a couple doors down painting Mine Shaft and the streets were so peaceful. The Arts Council asked that we create stencils so it can be faster, and man I freaken love stenciling so I had a ball with this one. Originally, I thought these panels were smaller in size but managed to work through it once I got there. I added some vines to help fill space. Hope everyone is good out there 🌈✨#artslb #msyellow #broadway #longbeach #longbeacharts #keepartsworking #covid19 #essentialworkers #stencils