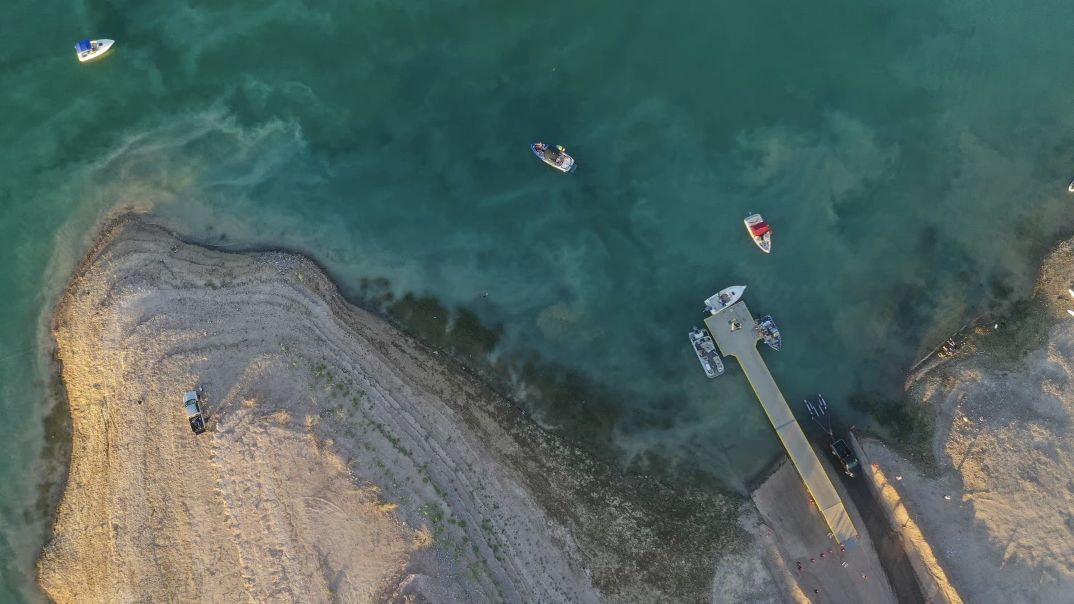 Lake Mead is the lifeblood of water for Los Angeles and much of the West, but now it's facing its first water shortage in its 85-year history.

The lake along the Nevada-Arizona border is one of the largest engineered lakes in the world, and it's drying up at an alarming rate.

In an interview for "LA Times Today," national correspondent Jaweed Kaleem joined host Lisa McRee to discuss what this means for millions of people and millions of acres of farmland across the West.

Lake Mead and the Colorado River get their water from melted snow that flows into La Poudre Pass in the Rocky Mountains.

"The river flowed for centuries and centuries. And in 1935, the Hoover Dam was built, and that blocked the river, and water backed up trillions of gallons and created this huge lake where the river was. The Hoover Dam gives us electricity, and the lake gives us water. There's a series of reservoirs and lakes now from the Colorado River in the mountains down to Lake Mead, to California, to Arizona, to the state of Mexico, to Nevada as well. And that's how we get our water," Kaleem said.

Kaleem said the iconic lake's crisis is marked by a "bathtub ring" of calcium deposits highlighting the rocky edge where water once flowed.

"It is astonishing. Lake Mead has been receding for 22 years. It hit its highest point in the early '80s and since then has dropped several hundred feet. And it's just getting faster and faster. So it's dropping by almost a foot a week now; that's a lot for this big lake. And when you go on the water around it, you literally can see where the lake used to be a month ago, where it was two months ago. You see these lines on the rock outside the lake. It's the contrast. It is so stark and obvious."

Lake Mead has been a lifeline for 25 million people and millions of acres of farmland in California, Arizona, Nevada and Mexico.

Lake Mead, a lifeblood of water for the American West, is rapidly drying up and approaching a crisis point. @alschaben and I recently visited this reservoir -- the largest in the U.S. -- as it hits the first water shortage in its 85-year history.https://t.co/XZ6pZtSeyJ

"It's drinking water. It's water for your lawns. A lot of it is for agriculture; that's a big part of it. Groundwater only goes so far in Southern California and Arizona and in these desert and arid climates. So, for example, in parts of California and Arizona, Lake Mead is the game for farm water to grow your crops; we live with water from northern California. So it's a mix, but Lake Mead is extremely important. We're talking about fires going on, climate change. This water is the basis of life," Kaleem added.

According to the U.S. Bureau of Reclamation, drought in Lake Mead is far from an emergency. Yet, the water level is nowhere near what it was a year ago. Having dropped 1.4 million acre-feet from April 2020 to April 2021 and 886,000 acre-feet since then.

"Many experts would disagree and say it is a crisis, it's a coming crisis. Now, the Bureau of Reclamation, which handles the Colorado River and Lake Mead, they have been planning around this for a long time, and that's why they see it a little differently. They're predicting the snowfall, the rain; they have agreements in place between states about how to share water and how to cut water. So that is their perspective. But to folks like us who are not in the weeds of water policy every day, I mean, it is crazy to see the pictures," Kaleem said.

Kaleem said that after years of an unrelenting drought that has quickly accelerated amid record temperatures and lower snowpack melt, the lake is set to mark another, more dire turning point. Next month, the federal government expects to declare its first-ever shortage on the lake, triggering cuts to water delivered to Arizona, Nevada and Mexico on Jan. 1.

"California has the best deal, so to speak, with Lake Mead. The lake can go down, but California most likely will not have to reduce its water intake until 2023. So we have a little more time to plan around this, but it is coming."