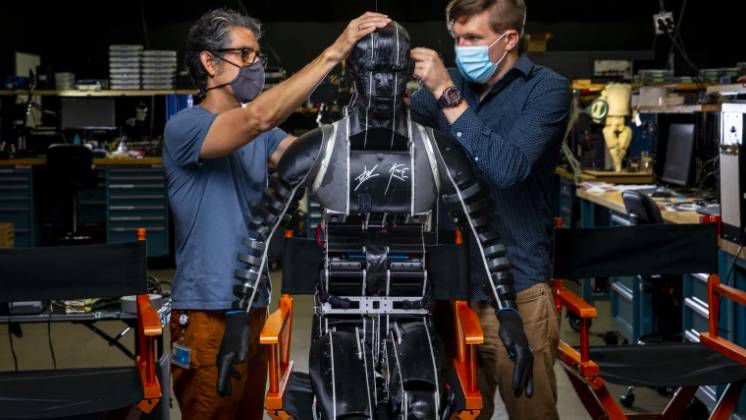 How Disney made Spiderman fly over Avengers Campus

Tucked away between the Disney California Adventure Park and Cars Land entrance is the new Avengers Campus featuring characters from the Marvel Cinematic Universe, including fan-favorite Spider-Man.

Carras said guests are able to experience a Spider-Man ride while a show that involves Spider-Man as a human performer and a robot.

"That is something that the director of live entertainment at the Disney Parks calls a robot sandwich. The human performer will come out, sort of dazzle the crowd, disappear behind the building that houses the Spider-Man ride. And then a robotics stunt double will launch from behind the building and soar through the air, strike a heroic pose and then disappear behind the building. The human performer comes back and continues his meet and greet responsibilities. And the transitions are supposed to be sort of seamless so that the crowd thinks it's all one superhuman being capable of these amazing feats," said Carras.

While the human performer does great tricks and flips, Carras said the show's real star is the Spider-Man robot.

"The Imagineers at Disney programmed it to perform six different stunt combinations. So sometimes it's somersaulting through the air. Sometimes it's striking a pose in the air. It rotates through them depending on the show. And it can go up to 85 feet from the audience's perspective on the ground and 65 feet from the launch pad where they're swinging it. They sort of devised this advanced slingshot system to mimic Spider-Man flying from a web."

The Spider-Man robot is a brand new technology that was developed by Imagineer Tony Dohi and creative executive Dan Fields.

"They wanted to mimic Spider-Man as much as possible. So they devised this really advanced slingshot system that involves a wire that they launch the robot from, and then it flies into the air, performs some stunt combination. And then it lands in a net, and they had to decelerate the landing. That is why they could not do it with a human performer. You can't program a human to decelerate," said Carras.

When COVID-19 hit, the Imagineers had the chance to perfect the robot, but they ended up making it imperfect after all.

"When they first presented stunt combinations to the live entertainment team, it was actually too perfect. It was nailing the combinations with a swan-like precision and grace. But Spider-Man, the character is far from perfect. He is a teenage boy with a lot of pride who is just testing out his abilities. And so he doesn't always look so graceful when he's testing things out. So they went back to the drawing board and programmed the robot to look like it was sort of out of control as the real Spider-Man tends to be," Carras added.