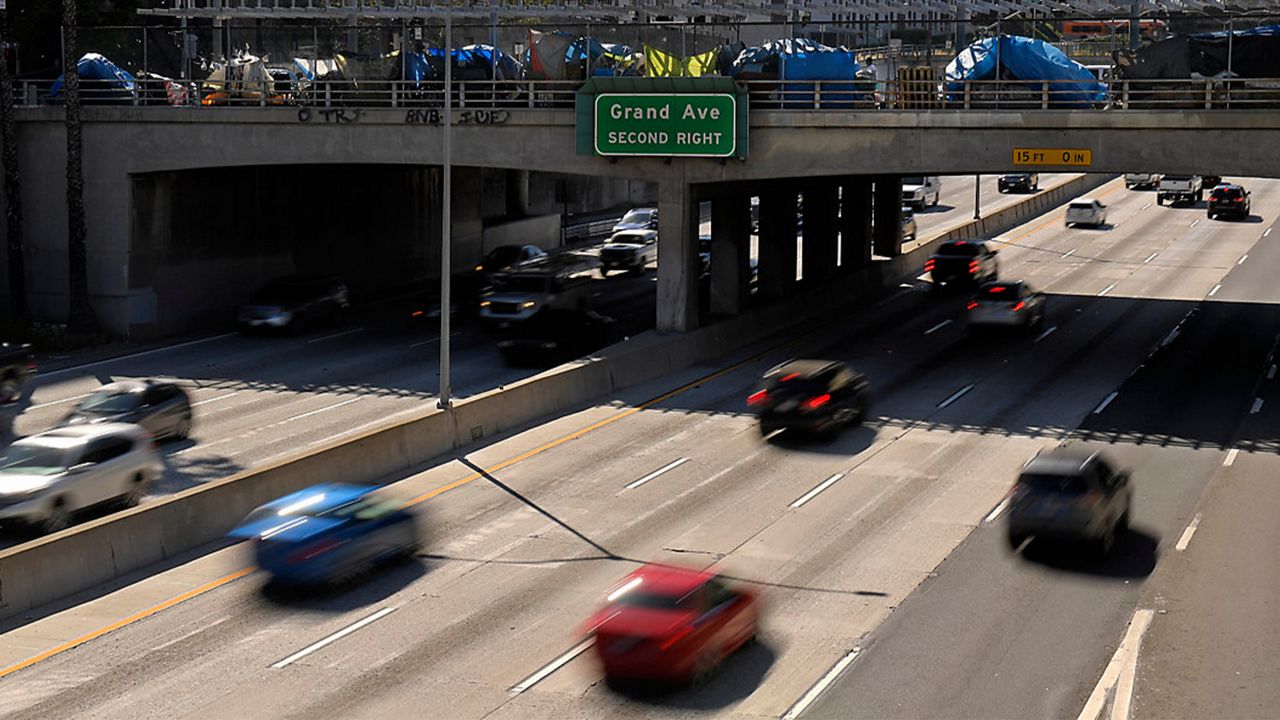 Traffic moves under a homeless encampment that sits on the Main St. overpass of the 101 freeway during the coronavirus outbreak, Thursday, May 21, 2020, in downtown Los Angeles. (AP Photo/Mark J. Terrill)

Mayor of Los Angeles Eric Garcetti is working with the state, L.A. County, and Federal Judge David Carter to develop a plan to place unhoused Angelenos living near freeways into shelters or hotel rooms through Project Roomkey.

On May 15, Judge Carter issued an order to relocate the thousands of homeless people living in encampments near freeways into shelters for health and safety reasons.

L.A. County responded last Wednesday to Judge Carter’s order, proposing a plan to develop exit strategies for the 3,000 people brought into emergency shelters and Project Roomkey hotels, and create additional shelter beds for the relocation of approximately 3,100 people who live under freeway overpasses and underpasses.

Mayor Garcetti said L.A. has housed more people in the last two months than it usually does in a year.

“We moved 3,000 people plus into our shelters and our rec centers, into our hotel and motel rooms, which grow every single day, and some people were able to exit that into housing so we can recycle those beds over and over,” he said.

Mayor Garcetti is still working with the County and Judge Carter to develop a strategy for housing Angelenos who live near freeways that all parties can agree to. The City and County have until September 1 to move these individuals into shelters, according to reporting from Curbed Los Angeles.

“I love his impatience. I love his passion. I love his record. And I love his heart,” Mayor Garcetti said. “He goes there out on the street like many of us have done for years to see the conditions and to understand what’s working and where we need more resources and more urgency.”

Angelenos living near freeways face two dangers: Breathing in toxic chemicals from cars and trucks every day, and catching the novel coronavirus.

“There’s no question: The people who live under and around where there’s fumes, there’s health impacts,” Mayor Garcetti said. “There’s also some benefits like shade and other things, which is why people shelter there, to be away from the elements.”

The City is planning to use some of its coronavirus relief funds, in tandem with resources from the County and the state, to move Angelenos who live near freeways into shelters.

“Imagine the three levels of government, together with some of these federal funds, saying, ‘This is important for us to take, not just dozens of people at a time, but potentially thousands of people,’” he said. “I’m less interested in moving them 500 feet away. I’m interested in getting them into shelters and into housing, where we can permanently move them into housing and get the services they need to never hit the streets again.”

Mayor Garcetti’s priority is housing those who are most vulnerable first.

“We have to remember, people living by the freeways might not always be the people most at risk for dying or getting COVID-19,” he said. “So with limited resources, we have to balance those two things of making sure we find the people who are most at-risk, while also addressing the judge’s ask that we focus on those areas where we see so many of our unhoused brothers and sisters.”

#ProjectRoomkey is saving lives by:
🏠 Providing temporary housing to seniors and medically vulnerable people experiencing homelessness
😷Preventing the spread of COVID-19
🏥Protecting capacity in our hospitals so that anyone who needs urgent care can receive it pic.twitter.com/xOpiw7iKR4

The Federal Emergency Management Agency (FEMA) is reimbursing up to 75 percent of the costs of Project Roomkey since L.A. County is under an emergency order.

“We really have to take this as a once in a lifetime opportunity to, as I said two years ago, treat this like a FEMA-level emergency,” Mayor Garcetti said. “And finally, we’re getting some of those FEMA resources, state resources, and others to help what we’ve done with two tax measures here locally, and we can’t do too much too quickly.”

Mayor Garcetti’s goal is to make sure that the 3,000 unhoused Angelenos who are already in shelter and hotel rooms don’t go back to the streets when this health crisis is over.