A shopper wears a mask as he passes by a closed storefront featuring a portrait of actor James Dean on the Hollywood Walk of Fame, Tuesday, March 31, 2020, in Los Angeles. (AP Photo/Chris Pizzello)

Coronavirus Updates: What to Know in SoCal

8:01 a.m. — Knott’s Berry Farm announced the park will temporarily close through the end of the month. There have been no confirmed cases of coronavirus at the park, but the officials said they will follow Centers for Disease Control guidelines on the suspension of mass gatherings statewide. Guests who have already paid for tickets can request a refund or re-booking at info@knotts.com.

6:52 a.m. — The City of San Gabriel is canceling all major city events at this time. Events with large groups of seniors will also be canceled as they are the highest population at risk of contracting the infection.

5:38 a.m. — Several Los Angeles County firefighters are being monitored at home after being exposed to a patient with COVID-19. The firefighters were called to help a person in cardiac arrest on March 9, who later passed away. It was determined the person was infected with the coronavirus. 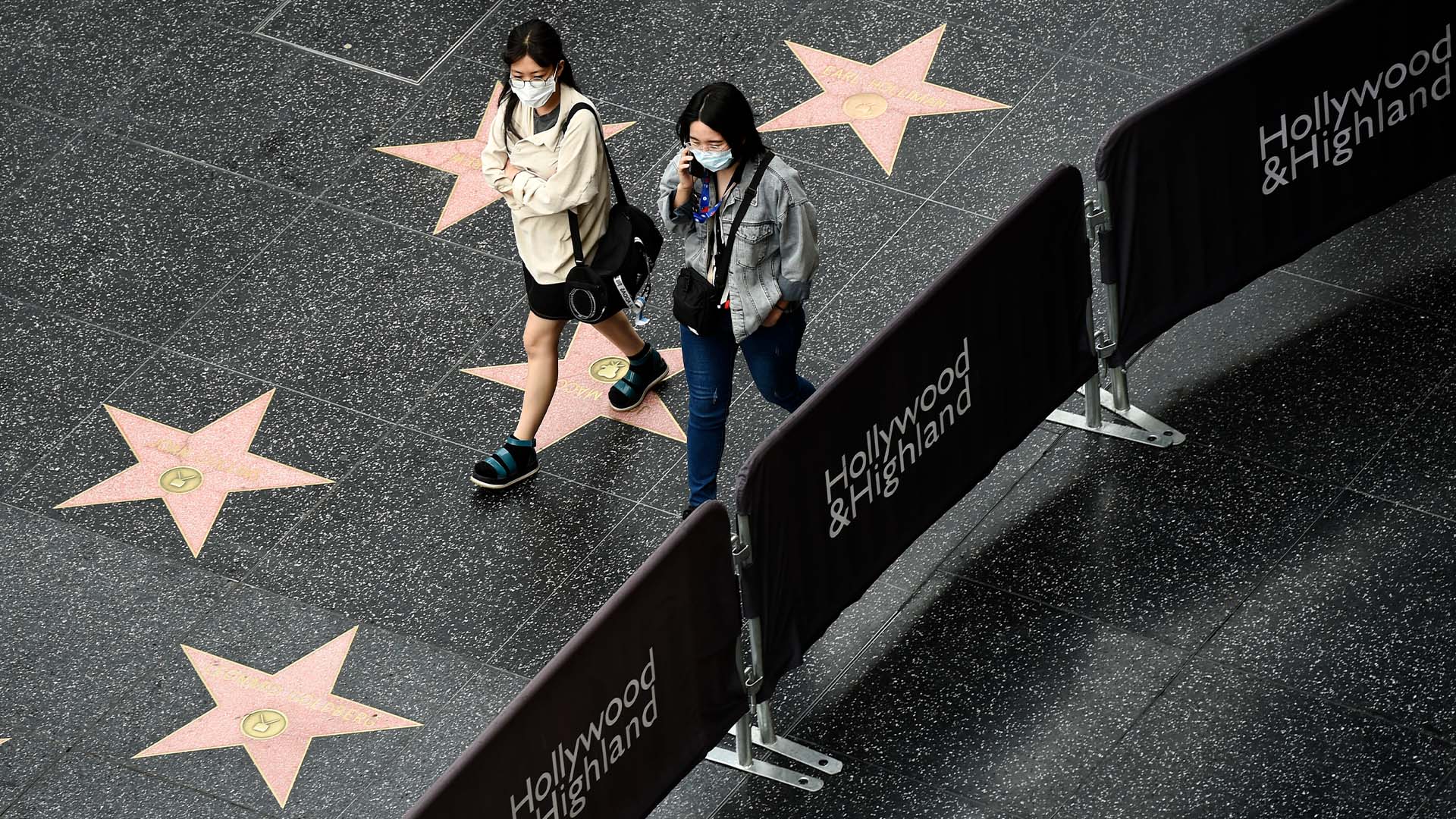 5:40 p.m. — All classes at Santa Monica-Malibu School District will be canceled tomorrow and Monday "in an abundance of caution" due to a parent in the district possibly having been exposed to coronavirus.

"We are taking this action to thoroughly clean our schools and evaluate the state of illness in our communities in order to make an informed decision for Tuesday into next week," said District Superintendent Ben Drati.

5:35 p.m. — The L.A. Department of Transportation says it will not reduce services because of the coronavirus outbreak. LADOT says it will disinfect service vehicles daily and that taxi franchise holders are required to disinfect their vehicles. LADOT will review scheduled meetings and either postpone them or move them to video conferencing.

4:37 p.m. — The newest addition to the Los Angeles sports Landscape, the L.A. Wildcats of the XFL will be suspending their inaugural season along with the rest of the league. In a statement the league says it intends to pay players their regular base play and refund all ticket holders, or issue them credit toward future games. The league expects to play its first full season in 2021.

3:20 p.m. — Universal Studios Hollywood has announced it will temporarily close beginning Saturday, March 14. The theme park anticipates reopening March 28 and will "continue to monitor the situation." The Universal CityWalk is due to remain open.

2:15 p.m. — Riverside County Public Health confirms one new locally acquired case in the Coachella Valley. The patient is on home isolation. This brings the number of confirmed cases in Riverside County to 8. The county's public health department has ordered large events canceled.

1:56 p.m. — L.A. Metro has created a Contagious Virus Response Task Force to work with the Los Angeles County Health Department along with the Centers for Disease Control and Prevention. Their efforts have focused on increasing cleaning efforts at major transit hubs, on trains, and on buses. Overall cleaning protocols are being reviewed to adapt to the coronavirus pandemic.

In response to recent reports of COVID-19, Metro has strengthened cleaning at Union Station, and we continue to clean our buses and trains at least once a day. For more on how you can help us prevent the spread of coronavirus: https://t.co/oCiSXeLV9S pic.twitter.com/RYYqbtcutb

1:35 p.m. — Disneyland Park and Disney California Adventure will close the morning of March 14 and remain closed through the end of the month. The hotels at Disneyland Resort will remain open until March 16 to give guests the ability to make necessary travel arrangements.

1:08 p.m. — At a mid-day briefing LA County Department of Public Health Director announced that there were three new cases in L.A. County. Two of the three new cases have identified the exposure source as "community transmission." The third case of exposure was someone who had attended a conference. The new cases brought the total number of cases across L.A. County to 32 -- including four cases reported by Long Beach Health and one reported by Pasadena Public Health.

One of the new cases has been hospitalized.

12:45 p.m. — Theaters across SoCal are going dark as the Geffen Playhouse, Mark Taper Forum, Center Theatre Group, and Kirk Douglas Theatre joined LA Phil in canceling or postponing shows. All remaining shows at the Ahmanson Theatre's production of Book of Mormon have been canceled outright.

12:25 p.m. — LA Phil has canceled all concerts through March 31 in order to protect public health and slow the rate of transmission of the coronavirus. Impacted events include The Movie Music of Spike Lee and Terence Blanchard and Cecile McLorin's Salvant.

CANCELLATION ANNOUNCEMENT: The California Department of Public Health issued a mandate that all public gatherings, including concerts and presentations at Walt Disney Concert Hall, should be canceled through March 31, 2020 to protect public health and slow the rate of

12:19 p.m. — The Los Angeles Dodgers and Los Angeles Angels join the region's other sports teams in facing uncertainty around their coming season as Major League Baseball announced that spring training would be suspended and the season would be pushed back two weeks. 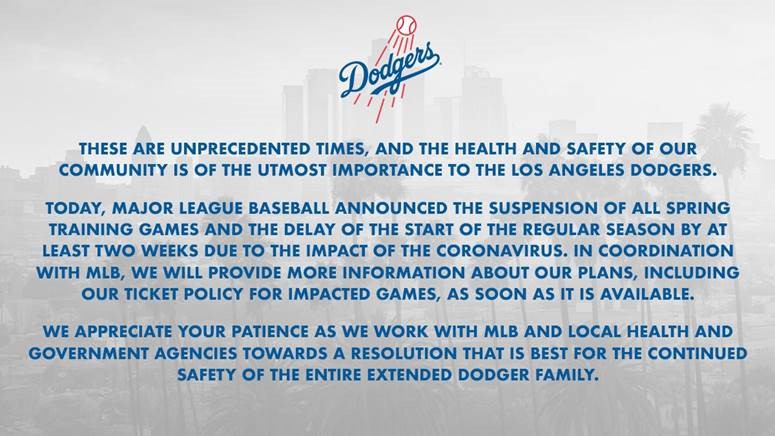 11:30 a.m. — Los Angeles Mayor Eric Garcetti announced that due to coronavirus concerns, L.A. City Hall is being closed to non-city employees. He has also ordered the cancellation of all city gatherings of 50 people or more, and all events or conferences at city-owned properties expected to attract more than 50 people. The mayor is also barring more than 50 visitors at a time to any city building and halting non-essential travel by city employees.

"I know this is an anxious time for a lot of people, but Angelenos should stay focused on preparation and protection — and not panic," said Mayor Garcetti in a statement. "We will continue doing everything we can to help guide people through this situation, and working closely with our local, state, and federal partners to keep our communities safe, aware, and informed."

To strengthen our local response to COVID-19, I’ve issued a directive for all @LACity departments that includes new measures to put limits on public gatherings in City facilities.https://t.co/PSBZ8HwxLz

11 a.m. — Governor Gavin Newsom held a press briefing updating the public on the latest statewide numbers related to the virus and further clarifying an executive order prohibiting non-essential gatherings of more than 250 people.

"We have directed cities, counties, private, public sector, large and small -- all throughout the State of California to no longer permit large non-essential events." Governor Gavin Newsom clarified his executive order prohibiting non-essential gatherings of more than 250 people during his daily press briefing on the state's efforts to slow the spread of the #coronavirus. Governor Newsom also gave updates on the latest numbers surrounding the virus in California: -198 confirmed cases -8,227 testing kits -4 deaths Under Governor Newsom's executive order, all non-essential gatherings of more than 250 people are being canceled or postponed. Schools at this time are considered essential gatherings and the order does not apply to them at this time. For the latest updates on the coronavirus, click the link in our bio.

10:30 a.m. — The regions sports teams have all effectively been stood down. Following Wednesday's announcement that the NBA would be suspending its season, similar announcements came forth Thursday from Major League Soccer and the National Hockey League. No games will be played by the Los Angeles Lakers, Clippers, Galaxy, LAFC, Kings, or Anaheim Ducks until further notice.

10 a.m. — As concerns grow over the impact the coronavirus could have on the region's homeless population, Councilmember Mike Bonin is spearheading an effort to deploy handwashing stations to homeless encampments across the Westside of Los Angeles.

COVID-19 has been officially declared a pandemic, the World Health Organization announced Wednesday.

For the latest updates go to: coronavirus.gov