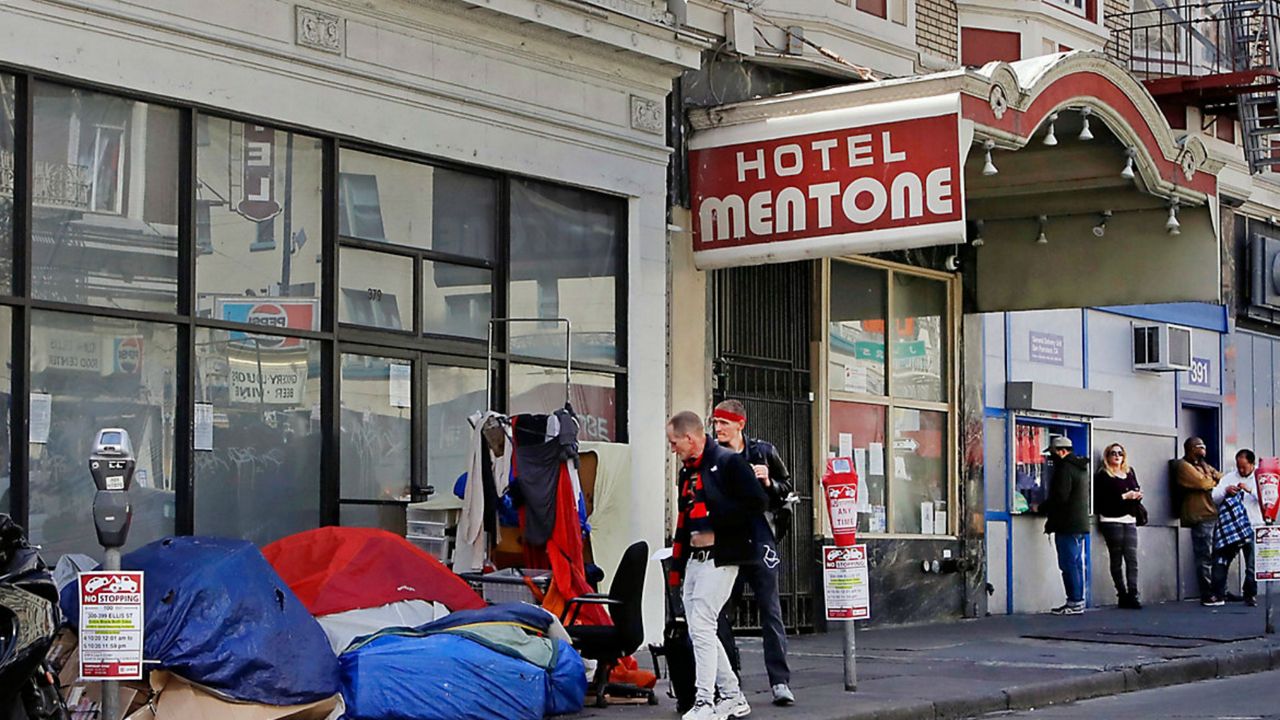 In this Monday, April 13, 2020, file photo, pedestrians walk to the edge of the sidewalk to avoid stepping on people in tents and sleeping bags in the Tenderloin area of San Francisco. California Gov. Gavin Newsom, who made solving the state's homelessness crisis a priority even before the coronavirus pandemic struck, announced Project Roomkey two weeks ago, a project in which the federal government will pay 75% of costs associated with housing some homeless. It covers people who test positive or may have been exposed to the virus, older homeless people and those with underlying health conditions. (AP Photo/Ben Margot, File)

“This effort is focused on targeting people who are the most vulnerable, who are experiencing homelessness, and don’t have the opportunity to shelter in place or be safer at home.”

Project Roomkey "is focused on targeting people who are the most vulnerable, who are experiencing homelessness, and don’t have the opportunity to shelter in place or be safer at home.”@hmarston2 of @LAHomeless is working to house unsheltered Angelenos in hotel and motel rooms. pic.twitter.com/pocJCqzCVd

The Centers for Disease Control (CDC) recommends that outreach workers prioritize providing individual rooms for homeless clients who “may be at higher risk of severe illness from COVID-19 due to older age or certain underlying medical conditions, such as chronic lung disease or serious heart conditions.”

“If we can keep these individuals healthy, who we know if they were to contract it they would most likely become hospitalized, we can make sure that we’re decreasing the flow into our hospital system and maintaining that capacity for people who need it and not taking that up with folks who we could have otherwise prevented from becoming ill,” Marston said.

Of the nearly 60,000 homeless people in L.A. County, Marston said at least 15,000 of them are on the high-priority list for Project Roomkey because they’re vulnerable. L.A. City Mayor Eric Garcetti announced Thursday that the County currently has more than 3,500 hotel and motel rooms leased. It takes two to three days to fill a room after one becomes available.

“We have about 2,300 people who are in these hotel/motel sites across the County,” Marston said. “All in all, it’s been a very successful measure in making sure that we stop the spread among this highly vulnerable population. But of course, 2,500 [or] 2,600 is a small number relative to 15,000, so we're going to keep going until we get as close as we can to meeting what we know the need is.”

Marston said people who are 65 years or older are eligible for Project Roomkey placement. However, the average age for those being housed in hotel or motel rooms is 55 years old.

“[This signals] that this population is just that much more vulnerable that they’re becoming eligible because they have these chronic health conditions, and that’s what’s qualifying them for this service,” Marston said. “This is literally a lifesaving measure that we’re undertaking.”

Marston said these hotel and motel rooms are desirable among people experiencing homelessness.

Project Roomkey clients get medical screenings twice a day. Nurses take their temperatures to make sure they’re not becoming ill.

“If they do become symptomatic, then we follow the department of public health protocols and move them to more of a medical sheltering site where they can receive the care they need,” Marston said.

All hotel and motel staff members are screened daily as well.

The Federal Emergency Management Agency (FEMA) is reimbursing up to 75 percent of the costs of Project Roomkey since L.A. County is under an emergency order. The City and County are funding the hotel and motel room leases and paying a by-room rate for a specified period of time. LAHSA is paying for supportive services, nursing services, three hot meals per person every day, and full-time security.

“It’s really a team effort and then our hope again, between the City of L.A., the County, and LAHSA, that we’ll get reimbursed 75% of those costs.”

Last week, U.S. District Judge David Carter ordered L.A. officials to find shelter for the thousands of homeless people living in encampments under freeway overpasses and underpasses, and near entrance and exit ramps, during the COVID-19 pandemic. Carter’s order will be enforced starting Friday.

"Don't waste a good crisis."@hmarston2 of @LAHomeless said "we have seen our homeless response system activate in a way that we've never been able to activate before."

Marston wants to keep housing L.A.’s homeless population at a high rate even after the pandemic is over. pic.twitter.com/MbKGrCWZw5

The City of L.A. responded on Wednesday, proposing a two phase plan: “Identify and activate exits for the approximately 3,000 people brought into emergency City shelter settings (recreation centers and City-funded Project Roomkey hotels) over the course of 120 days; and create additional shelter beds and locations for the relocation of approximately 3,100 people who live under freeway overpasses and underpasses in the subsequent 180 days.”

“Part of our outreach for Project Roomkey and just generally includes all of the individuals we know who are living in underpasses, overpasses, and freeway spaces,” Marston said. “So it certainly is a population we know and we work with very actively. If they are eligible for Roomkey, they would be eligible to go in just like anybody else who is experiencing homelessness.”

However, Marston said prioritizing homeless individuals for housing based on their geographical location hasn’t been effective in the past.

“While fundamentally that tends to make sense sometimes because we could clear a large encampment, it does have ramifications we need to think through,” Marston said. “We don’t know the demographics of that population, so are we disproportionately impacting some of our overrepresented groups like black African Americans, like Latinx, and those populations by prioritizing people where they are versus what their need is and what the vulnerability is? We want to make sure that the safety is all maintained and that we’re not doing anything to make that worse.”

Since the County has limited resources, Marston said some hard choices need to be made to ensure that those who are the most vulnerable are getting the services that they need.

Marston acknowledges that it took a global pandemic for L.A. County to spring into action and house its homeless population rapidly.

“We’ve heard the phrase a lot lately ‘Don’t waste a good crisis,’ and that’s exactly how we’re looking at this. This is tragic, it’s a pandemic, and people are losing their lives,” she said. “Since COVID has started, we have seen our homeless response system activate in a way that we've never been able to activate before because of limitations around either aligned goals or funding.”

Marston said one side effect of the COVID-19 pandemic is an insurgence of resources for L.A.’s unhoused population and an alignment in purpose and goals among City and County officials to house and protect these Angelenos.

“We are able to move much faster, and it’s demonstrating that we know what works, we know the interventions, we know what people need. We just need the momentum… the political, the public will, and the funding to make it work,” Marston said.

LAHSA’s goal is to keep housing L.A.’s homeless population at a high rate even after the pandemic is over.

“It’s great to get people inside in these hotels and motels and keep them safe. What we cannot do is go back to the status quo and have people who are in these sites just go back to the street,” Marston said. “We have to build our capacity longer term to exit them either to a permanent solution or temporary solution, which is really our focus right now, is working with each individual person to make sure they’re set up for success after these hotel and motel leases end.”