REDONDO BEACH, Calif. — The sun was about to set behind a row of condominiums on Redondo Beach’s Catalina Avenue, about a block away from the Redondo Pier. There was a break in the cars that had been whizzing past, and in the space between, two sounds remained: the whirring of a battery-operated fan, and the swish-swish-swish of nylon–covered legs brushing past each other.

The Redondo Rex was on the move.

But instead of her usual namesake Tyrannosaurus Rex, the woman behind an increasingly popular local Instagram page, with a growing presence on local social media, chose to wear a human-sized inflatable gingerbread man costume.

For more than an hour, the woman in the costume has waved to traffic, hugged people, taken photos, and shouted, “Happy Holidays!” to people passing on foot and in car alike.

Then the swishing of the legs and whirring of the inflating fan were interrupted by another woman, calling down from a balcony.

“Hey! Where’s your facemask?” she shouted, prodding Rex for not wearing personal protective equipment on her walk. (Never mind that the only mask big enough for that face could double as a pillowcase.)

The Redondo Rex paused, then looked up through the clear-plastic sheet of the costume’s mouth.

“My whole body is PPE!” she yelled back. Both women laughed, and Rex continued on, legs swishing and motor whirring. 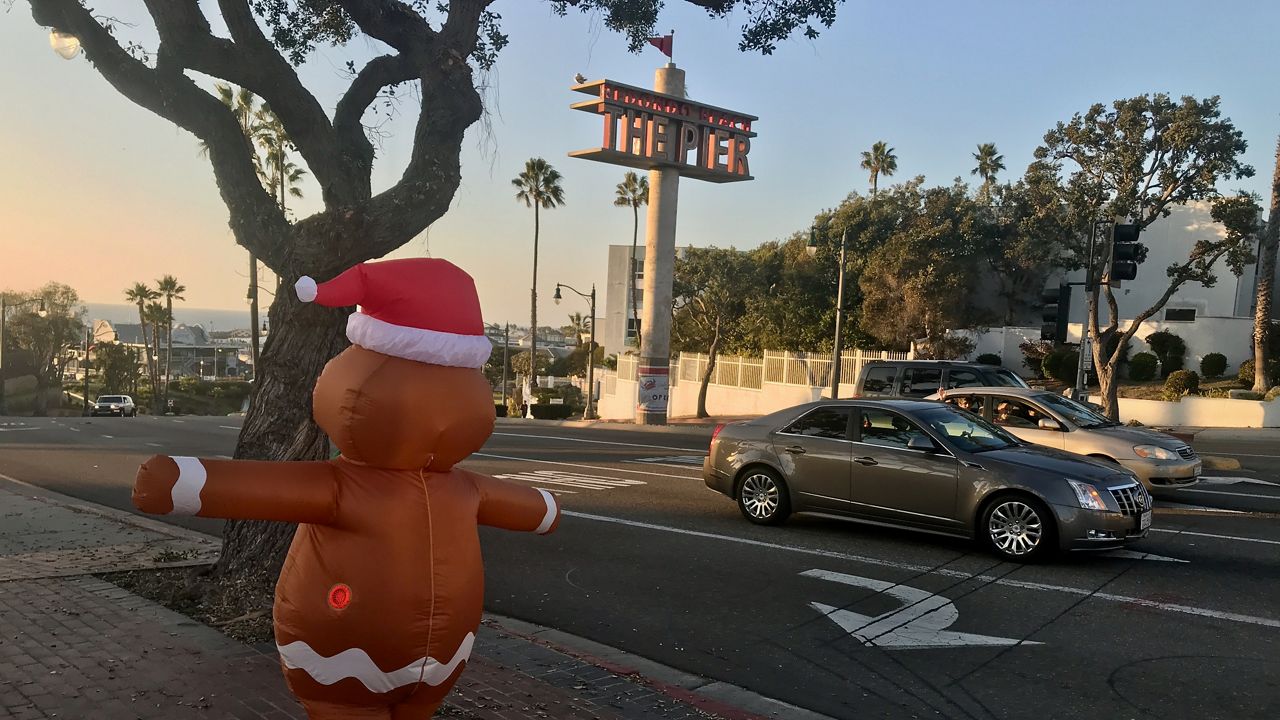 The woman behind the Redondo Rex gave me her name and details used to verify her identity but asked to remain anonymous — or at least as anonymous as a woman who takes to the sidewalks in an inflatable costume can be. So for this story, she’ll be called Rex.

Rex began her strolls as a way to help her mental health during the COVID closures. She’s married to a man who works in the entertainment industry, and she is a mother to two adolescent sons. She’s a nurse by trade but has hung up her scrubs for the time being.

Her husband and one of her sons are “high-risk,” she said, and she wouldn’t risk their health for the world.

“I told them that, if I went back to work, I would not step foot in the house again until everyone’s vaccinated. And that would be even worse, to not see them at all,” Rex said. “So it’s hard. I feel like I need to be out there, helping the other nurses and doctors.”

But as a result of her withdrawal from the world, Rex has spent much of the last eight months only talking to three other people. There aren’t a ton of family-safe activities for high-risk folks, she’s found. She was walking regularly but learned that people rarely greet each other and can’t really stop and chat in the age of COVID.

Then, just before Halloween, she came across a random Facebook posting. Someone had offered to give away an inflatable dinosaur costume, and inspiration struck.

“We’ve all seen videos of that T-Rex surfing, or skateboarding, and they’ve always made me smile,” she said. “I thought it would just be fun to walk around in that crazy thing, and bring some smiles and laughter to my neighbors — and hopefully get me out of the house a little bit more as well.”

The Redondo Rex Instagram went live on November 2, with a blurry photo of the T-Rex holding a dog’s leash. Before long, more inflatable costumes went into the rotation: the gingerbread man, a unicorn, and a clown walking on his hands.

All of them, Rex said, were gifts from friends.

Rex usually takes one walk just after 10 a.m. and another after 3 p.m. Both are timed to catch kids and parents during their school breaks, in case they’re playing outside. When she’s announced that she’ll be at a particular neighborhood, Rex will drive to a quiet nearby starting point with the costume on up to her waist, park, then put the suit on and fully inflate it. She’ll usually stroll for about an hour (just long enough before her battery packs quit on her), then head back home.

The suits, she said, are like walking around in a sauna.

“But it’s so fun! The honks, the waves, I had one woman on Sunday who just had this big, full-body laugh when she saw me,” Rex said. “So who cares how hot I am? It’s just fun!”

Two days before Thanksgiving, I caught up with Rex on her way to the Redondo Pier. As we crossed the street, a man from the opposite corner broke into a huge smile and offered a hug.

The reactions are instant.

Seriously, nearly every person who sees Rex lights up, laughs, and returns her wave. Paula White, a bus driver for the City of Torrance, was on break and parked near the Redondo Pier’s entrance when she saw Rex. At first, she asked if Rex was collecting money for something in particular.

White smiled, then jumped in for a hug and asked for a photo.

“She made me instantly feel happy,” White said. “We deal with a lot driving buses, and to see something like that? It just made my heart feel good.”

At the pier itself, Rex was a magnet for attention. Kids broke away from their parents to follow her. Some kids reached out for hugs, some held by their parents turned away quickly, but most stared up to her with a blend of confusion and joy.

When people requested photos, Rex happily complied, telling everyone to “say gingerbread!” Then, just as the photos were snapped, she would duck her head just below the window. 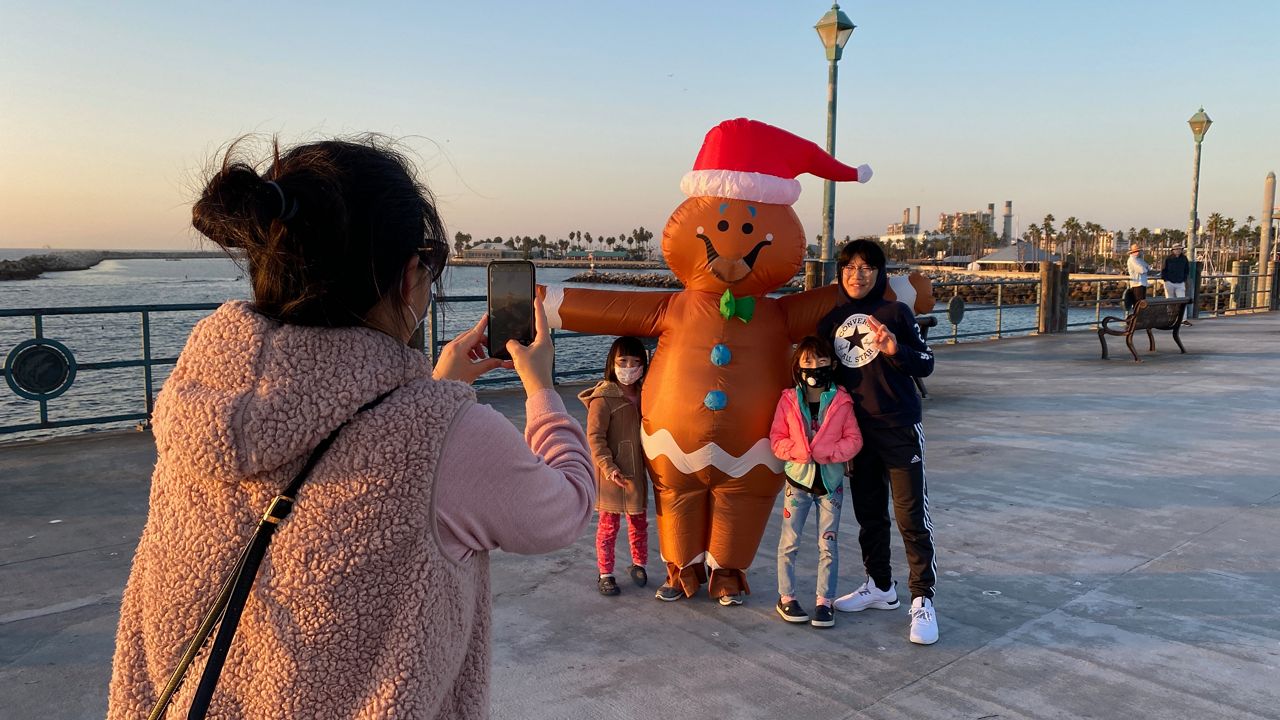 The relative anonymity is important to her. Even in costume, she wears a covering over her nose and mouth.

Part of her reason for privacy is that she’s really not looking for any personal attention — but the other, larger part, is because it’s more fun that way. Even on Halloween with her kids, she ditched the inflatable costume for the day for another get-up, to throw neighbors off of her trail.

“I think it’s more fun that way. If everyone knows I’m so-and-so’s mom, it takes a bit of the fun out of it,” Rex said.

“Fun” is the operative word — on the pier, few people could contain themselves from smiling as they watched a gingerbread man tottering toward them. Min Kim, of Northridge, had come to Redondo for a day of fishing and seafood when her kids swarmed Rex. Jailene Symonds, of Downey, and Denis Abashnrov of Encino, had a camera set up for a sunset selfie when Rex wandered past and was brought into their shot. Dodgers fans, packs of teenagers, more and more random children and their beleaguered parents.

It seemed every single person felt better with Rex, and her gingerbread suit costume, in their day.

As Rex was nearly back to her car, parked northwest of the pier, Pamela Wojtach charged over to Rex, carrying her dog Medo in her arms. Wojtach had seen Rex on Nextdoor and Instagram and was driving past when she spotted Rex on the sidewalk. She pulled over immediately, no-parking red curb be damned, angling for a selfie. Medo wasn’t quite as excited though, and the photo opportunity was dashed.

“I literally abandoned my car, I don’t think I’m even parked properly,” Wojtach said, laughing. “I’m from New Jersey originally, and in my community back at home, we don’t do cute things like this. I love her. She’s great.”

Wojtach was just so happy to meet Rex on her mission to get out, to have fun, and to spread joy.

“I think that’s what it’s all about. Especially this year. We need it.”