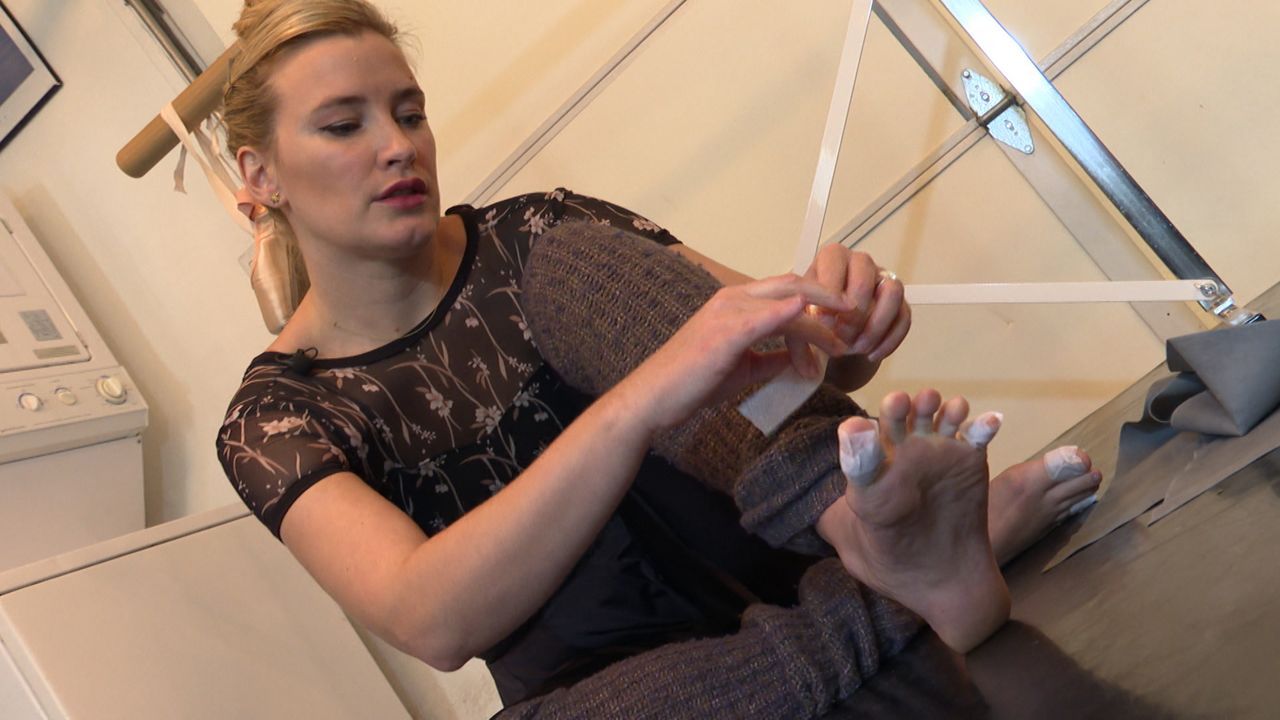 Theresa Farrell has been dancing since she was child, and is now a professional ballerina.

HOLLYWOOD, Calif. — Dancing since she was a child, Theresa Farrell is a professional ballerina who is constantly in motion. She normally has a bottomless well of energy, but when the first symptoms appeared, Farrell knew it something was serious.


“This wasn’t tiredness,” she described. “This was just this incredible overwhelming fatigue.”

Her fatigue was followed by coughing and shortness of breath. It was the end of April – weeks into the pandemic – and all signs seemed to point to COVID-19.

Farrell called her sister Colleen, a pulmonary fellow who was on the front lines working in an intensive care unit in New York City.

“She said ‘I really would feel better if you were seen in the ER,’” she said. “That was scary because she is not an alarmist.”

Immediately, the medical staff at the hospital thought it was COVID too, but her test came back negative.

“[It] was very confusing,” Farrell said.

It was very late in Los Angeles, the middle of the night on the east coast, and the doctors asked her to call her sister and wake her.

“That really scared me. That’s not normal,” she recalled. “New York was experiencing so much more of this, and they thought she might have insight.”

Farrell was never admitted. She came home that night but that was just the beginning.

“I did not get out of bed for an entire month,” she said.

She slept most of the time and was so weak that even moving a tissue box left her “wobbly.”

That was followed by another month of severe physical fatigue. Walking the dog left her drained and dancing was out of the question.

“I would do one grand plié, something I’ve been doing every day since I was 8 years old, and my thighs were burning,” she said.

Months later, she is still suffering from lingering health problems. Her heart races. There is a ringing and pulsing in her right ear — a complaint found to be fairly common in patients who’ve had COVID-19.

An antibody test also came back negative, but for Farrell, who has been in athletic shape all her life, none of this adds up.

Being unable to move for so long has taken a toll on her mentally as well, but even as she laid in bed, she found a way to connect to her art.

“When I was sick in bed I started choreographing a dance about what I was experiencing and I really feel that carried me through. Each day I would kind of lift my arm to see if it felt light or if it took a lot of effort and that’s how the dance begins,” said Farrell.

The piece is called Dust to Dust, and Farrell describes it as “an appreciation of movement and of life and of recognizing how fleeting it is.”

Now that she is back at the barre, she is learning to flex new muscles. She regularly posts popular TikTok videos with tips and tricks for ballerinas – from how to improve their turnout to how to make a French twist.

She is also launching a virtual workshop for young dancers to prepare them for the new world of online auditions.

In addition, she is sharing her story.

Farrell believes there are still so many misconceptions about who COVID effects and how bad it can be even for the young and healthy.

“One thing that was so frustrating when I was so sick was people would be like, ‘oh, you’re young, you won’t die,’” she said. “And I was like, since when is that the bar of something being a big deal or not?”

She is far from done with tests and doctor’s appointments. Farrell may not have all the answers, but what she does have is a new sense of appreciation.

“I feel so grateful for my health,” she said, knocking on the wooden barre, “and I feel that I won’t be taking it for granted anymore.”