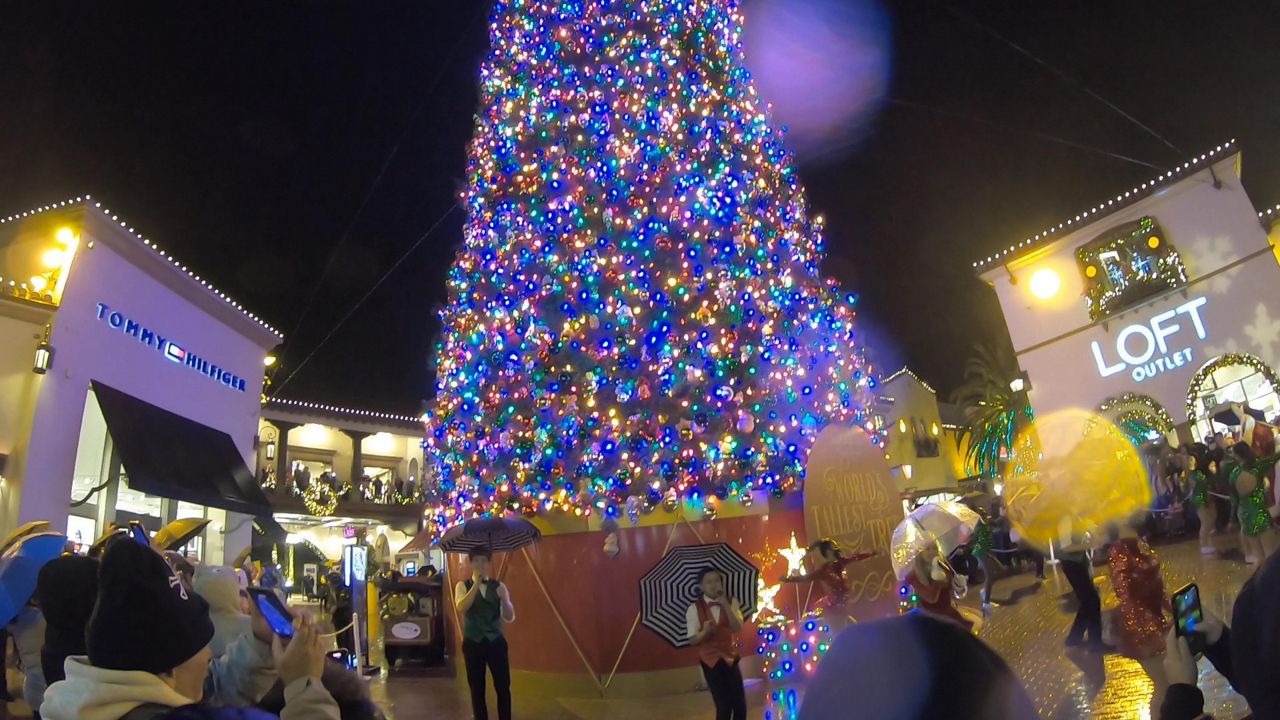 It's Not Even Thanksgiving, But Parts of SoCal Look Like Christmas Is Here

SAN CLEMENTE, Calif. — It may not be Thanksgiving yet, but prepping for the holidays began in October for the Outlets in San Clemente. Ten thousand ornaments and 18,000 lights were ready to adorn the center's gigantic Christmas tree.

Chase said this is his favorite time of year when the five-year-old center turns into a winter wonderland full of holiday cheer and holiday music, all day, every day.

If you couldn't tell, Chase is a huge fan of Christmas.

"Whether it happens in September. Happens in October, or November, or Christmas in July. You name it. I love Christmas," he said.

He said for those thinking it may be way too early for Christmas, aka 'the grinches,' he has a suggestion.

Since this shopping center in San Clemente opened five years ago, which is the same time Chase started working at the center, Christmas has arrived in October. That's when the center's Christmas tree is typically delivered.

"This tree comes from the middle of the forest. Therefore you have to get it out before the ground gets all muddy. So it gets set up here a little earlier than normal," Chase explained.

This year's tree, which was set up in late October and early November, traveled to San Clemente from Mt. Shasta.

Victor Serrao is someone who knows Christmas trees. He's been in the business for 40 years and owns Victor's Custom Christmas Trees. He said the tree comes from a privately-owned forest area managed for timber production.

"If you walk into Home Depot and you see 2x4s in the lumber section, that is not this tree," he said while pointing at the tree. "It's [the Christmas tree on display] not good enough for that. So, what they do is, they really plant them for Christmas trees, and they just plant them up there to be trees."

Serrao helps get the trees from the timber farms to shopping centers like the one in San Clemente. Serrao is also the man behind many of the local trees at shopping centers throughout SoCal, including the Grove in Los Angeles, South Coast Plaza, Fashion Island in Newport Beach, the Americana at Brand in Glendale, Westlake Promenade in Thousand Oaks, Palisades Village, Victoria Gardens in Rancho Cucamonga, Los Angeles City Hall and the Citadel Outlets.

The tree at the Outlets at San Clemente is what the center calls "the world's largest Christmas tree." Serrao coordinated everything from the tree's travel to the assembly.

"If anybody knew everything that goes into it, they'd be like, 'Wow that's a lot a work!'" he said.

Serrao explained he must make sure the tree is secure from above ground and underground. He said he adds wooden pegs where branches have been removed and also adds flame retardant.

"It goes like seven feet deep," he said. "And then there's these big wooden wedges that go way down here."

And that's just the work you can see. Serrao said for his crew "June is when Christmas starts for us."

It's all work to help spread the holiday cheer to families, including one that was visiting the Outlets at San Clemente earlier this month. The father of the family of four said the tree is in earlier than you'd expect, but he didn't mind during a year with a pandemic.

"People need this," he said. "And I think everybody has to come in and look at this tree. It's going to make you happy."

It sure makes Chase happy, and he said he hopes the tree can bring joy to even the grinches among us.

"There's no way to not like Christmas!" he said, laughing.

After the holidays, Serrao said the tree would be recycled and made into mulch. According to Serrao's website, for every tree his company harvests, 12 trees are replanted in its place.