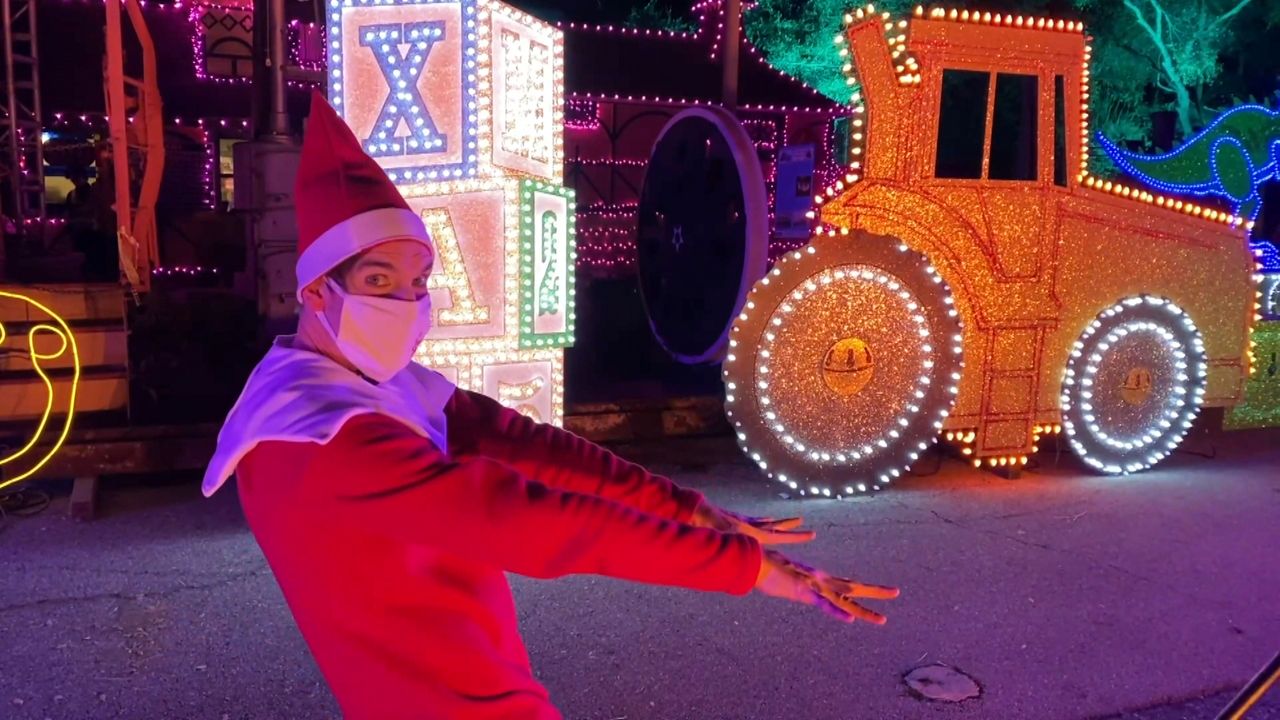 POMONA, Calif. — A lot of clowns go above and beyond when it comes to being funny. But few are as serious about their craft as Joel Baker.

"There are people who are born to be clowns, and when they find an outlet like a circus, you kind of realize that's who you are," Baker said.

He's always loved being a clown, even during the rough patches.

"I worked six hours a day for four years training in a circus school," he said.

But in March, the coronavirus hit, upending the way Baker makes people laugh.

Baker is one of 13 circus performers in a new hour-long holiday event based on the 2005 children's book, The Elf on the Shelf. The book is about a tiny elf who magically appears during the holidays to help Santa Clause determine which kid has been naughty and which one has been nice. This is the first time Baker is playing an elf, and he knows he's one of the lucky ones.

"I was supposed to be on tour this summer, and everything got canceled," he said.

Perhaps no sector has been hit quite as hard as the live entertainment industry, which saw 95 percent of its shows shut down due to COVID-19.

According to WeMakeEvents, an advocacy group for people in the entertainment industry, more than three-quarters of people in the industry have lost all their income.

Marty LaSalle, the co-head of Constellation Immersive, which produces the Elf on the Shelf event in Pomona, said the show was created with the pandemic in mind. Patrons never leave their cars, hearing the soundtrack through an app. The show features an all-new storyline narrated by an elf named Tiny Tinkerman.

"He will explain that because Christmas spirit is low this year, Santa can't fly his sleigh; he has to make an emergency landing here at the Fairplex, in Pomona," LaSalle explained. "So the whole premise of the experience is that families and children have to collect Christmas spirit and generate Christmas spirit throughout the journey so that at the end hopefully, if enough spirit is collected, Santa can fly away in his sleigh and Christmas can be saved."

The journey begins with a magical "Shrinking Tunnel," and larger-than-life sets filled with bright lights and snowy winter wonderlands.

At T minus zero, Baker takes his place at Santa's workshop. He knows it's going to be a little different, but he's confident he can make it work.

"We know people are reacting without hearing them," he said. "If there's a moment that's done well, and you know what you're doing, just a smile is enough."

The Elf on the Shelf's Magical Holiday Journey drive-thru experience goes through January 3 at the Fairplex in Pomona. Tickets start at $24.95 for adults, 13 years and older, and $19.95 for children.