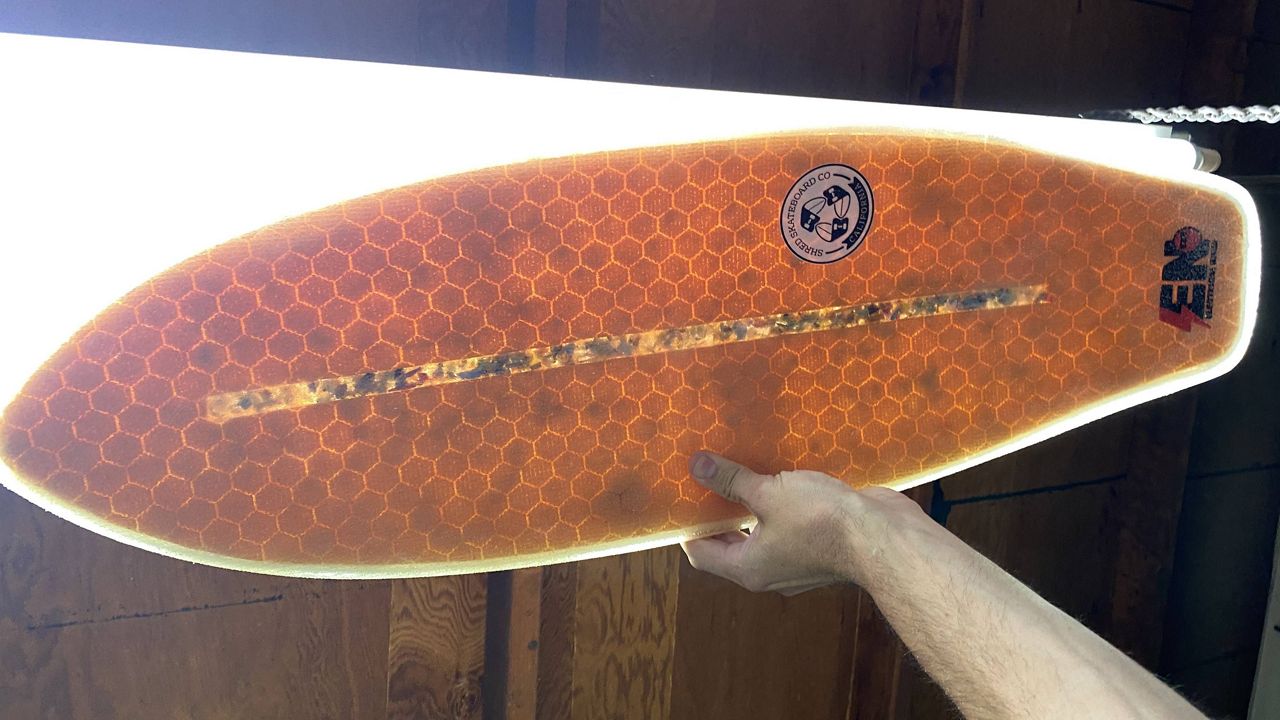 TORRANCE, Calif. — The process to shape a surfboard, which includes sanding and cutting, can create waste and trash, but a Torrance company is using that trash and turning it into a way to get around on four wheels.

Marcelo Gagliardi filled up a blue bucket full of what might look like trash to some people, but it is a treasure to him.

"I've been working building surfboards my entire life," he said.


He loves the industry but making surfboards can leave a lot of waste. For example, he said dust-like white debris is leftover from foams cores when shaped into surfboards.

There are also bits of resin, plastic gloves, stir sticks and all the things used to make surfboards.

"Typically, all of this would end up in a landfill. There's no way right now that's viable for surfboard factories to process their waste or to recycle it," Gagliardi said.

Since working with Earth Technologies' sustainable surfboard company, which launched the surfboard shaping industry's first zero-waste initiative, Gagliardi got inspired to use the waste to create something else people can ride.

According to Earth Technologies, each surfboard can produce about double its weight in waste in traditional manufacturing.

All the surfboard waste at Earth Technologies is shredded into tiny pieces, and Gagliardi and a team use it to help create a 100% recycled skateboard for Shred Skateboard Co.

"This is pretty much the guts of the board," he said as he laid down a skateboard deck that looked like a patchwork of colors and specs from the shredded resin, plastic gloves and other waste.

Jeff Schauf got involved with the Torrance-based skateboard company through a mutual friend. He said Shred was supposed to be a temporary gig for him.

"I decided to stay on because that's how much I believe in it," Schauf said.

In addition, he surfs and skateboards. He said it is fun to be a part of the company and just as exciting to be working toward a mission.

"The more that we can sell, the more waste we can leave out of the landfills," Schauf said.

The company just kicked off earlier this year. Gagliardi said each skateboard includes about three pounds of surfboard waste.

"In our last batch, we salvaged 84 pounds of trash, and we turned them into 21 skateboards," he said.

Gagliardi, who is a surfer and sometimes skateboarder, is proud of that accomplishment.

"They say if you do what you love, you don't work a day in your life. I do not know if that is exactly true, but I sure do love it and enjoy every day," he said.

Gagliardi said knowing he is helping the Earth while providing people a sustainable way to shred is beyond rewarding.

For each board sold, Shred also purchases a sea tree for the SeaTrees organization.

SeaTrees is a program of nonprofit, Sustainable Surf. The mission of SeaTrees is to provide financial support to "regenerative" projects that protect and restore critical "blue carbon" ocean ecosystems, such as Mangrove forests, Kelp forests, Coral reefs, Seagrass meadows and Ridge to Reef watershed conservation.

Shred also has a skateboard-recycling program, which offers a $25 discount to those who ship their damaged or old board to them.

They will take the old board, shred it and reuse it to make another board.