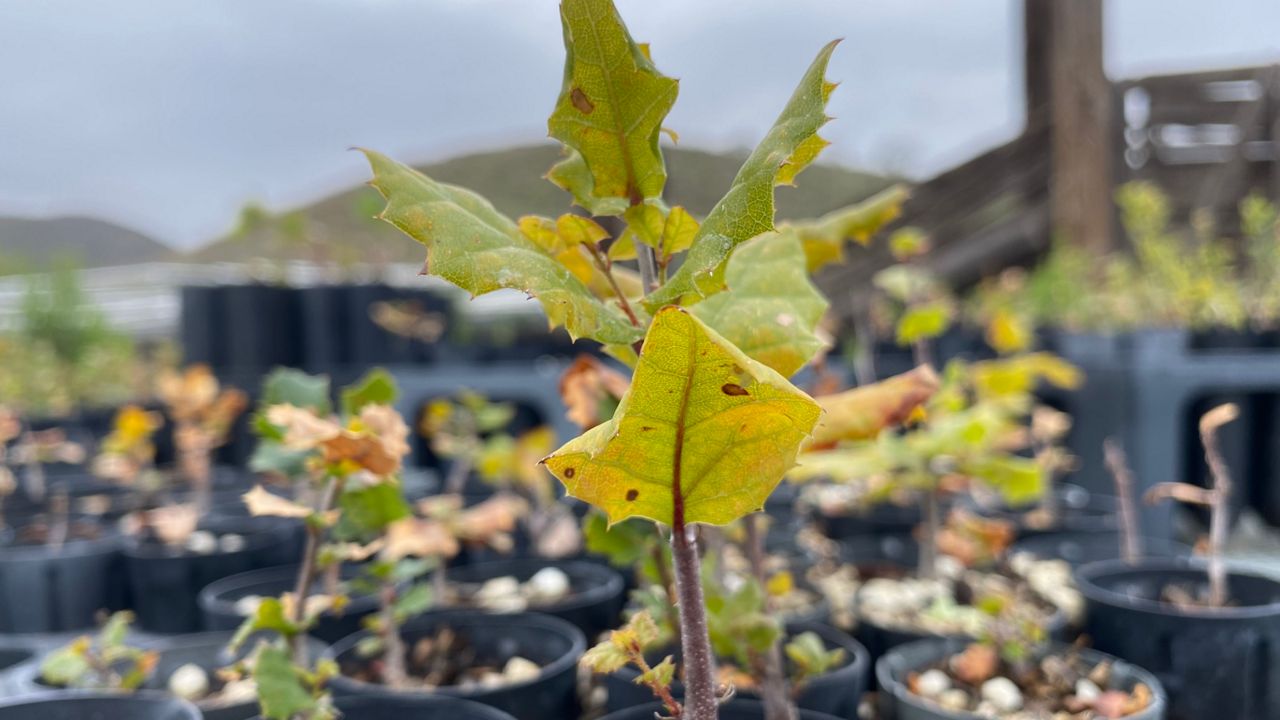 Nursery manager connects to his roots while working with native plants

NEWBURY PARK, Calif. — We can’t save time in a bottle, but Antonio Sanchez believes he can preserve the future in a jar.

“This is Asclepias Fascicularis, narrow leaf milkweed,” he said, holding up what had once been a jar of Talenti Gelato but which now is being reused to hold carefully collected milkweed seed.

Sanchez is the nursery manager at the National Park Service Native Plant Nursery at Rancho Sierra Vista. He estimates there are about 60,000 plants here, like California sage brush, purple needle grass and wild rye.

He doesn’t like to consider the plants his babies — “My babies at home would be mad if I said these were my babies,” he laughed — but he does feel a tremendous responsibility to take care of them.

Whatever he’s doing, it’s working. Over the past two years under his watch, the number of plants has increased tenfold.

Some of that is through cuttings. Sanchez empties a trash bag full of black sage onto a folding table and walks a group of interns through the process.

“It’s almost like taking a little piece of your finger and growing a whole human from a finger,” he said, “which would be cool if it could be happen, but it doesn’t.”

But a bulk of the work here is done through a carefully controlled planting process, grown from seeds collected at specific sites.

“Our goal is to put every plant back almost exactly where we found it,” Sanchez explained, standing over a group of seedlings that will be returned to Potrero Creek. “These plants know, because they’ve probably been there for hundreds if not thousands of years, they know what life in Potrero Creek is like and it’s way different from life in Calabasas or Agoura Hills.”

Not every seed, however is planted. A horse stable has been converted into a seed bank that holds what Sanchez describes as the “largest collection of Santa Monica Mountains seed in the world.”

Last summer, his team completed over 150 seed collections and are still processing them, by hand and by machine, before they can be added to the freezer.

“We have stuff that only occurs in our mountains,” Sanchez explained. “So if there’s ever a fire again and god forbid we lose something rare, we’ll have the genetics from that area to go ahead and try to restore.”

Restoration is the name of the game for Joey Algiers of the National Park Service.

“We’re out here preserving what’s unique about California,” he said of the nursery’s mission.

He oversaw the facility for a few years but admits, he wasn’t doing anything close to what Sanchez has implemented. “I was just like putting seeds in there, trying to get them to germinate,” he laughed, “but he does a lot of this very refined specialized stuff and it matters. It means that we can grow a lot more plants and get a lot more in the ground so we’re lucky to have him.”

There are other projects too. An herbarium where hundreds of species of plants in the parks are being cataloged with GPS data. And an extensive milkweed project to help support the monarch population. Restoration, Algiers said is about sowing the seeds that will allow California’s natural resources to thrive long into the future.

“I see the next generation of plants that’s going to make its way out into the natural areas and provide quality habitat, so food, places for nesting, places to lay eggs,” he said, surveying the seedlings that cover dozens of tabletops. “That’s’ really the main thing that we’re thinking about, is trying to provide a healthy enough environment so decades from now, hundreds of years from now people, can go out and see these healthy communities that have been carrying on and passing on generation and generations.”

Sanchez, too, focuses on the future, but for him, this work is also about connecting to his roots. His father’s family came to California 100 years ago. His mother’s side is from Mexico. He wants to understand California’s native ecology out of respect for the land he said, but also to give something back because we have taken so much.

“It’s almost like me saying I’m sorry. It’s almost like a forgiveness, right?” he said. “It’s a way that I can make my life whole and then I can teach that to my kids. To learn these plants and to try to live with them and to respect them, I think if I can teach my kids anything, that is the most important thing for me."

To learn about volunteering at the nursery or on restoration projects, email samo_volunteer@nps.gov.