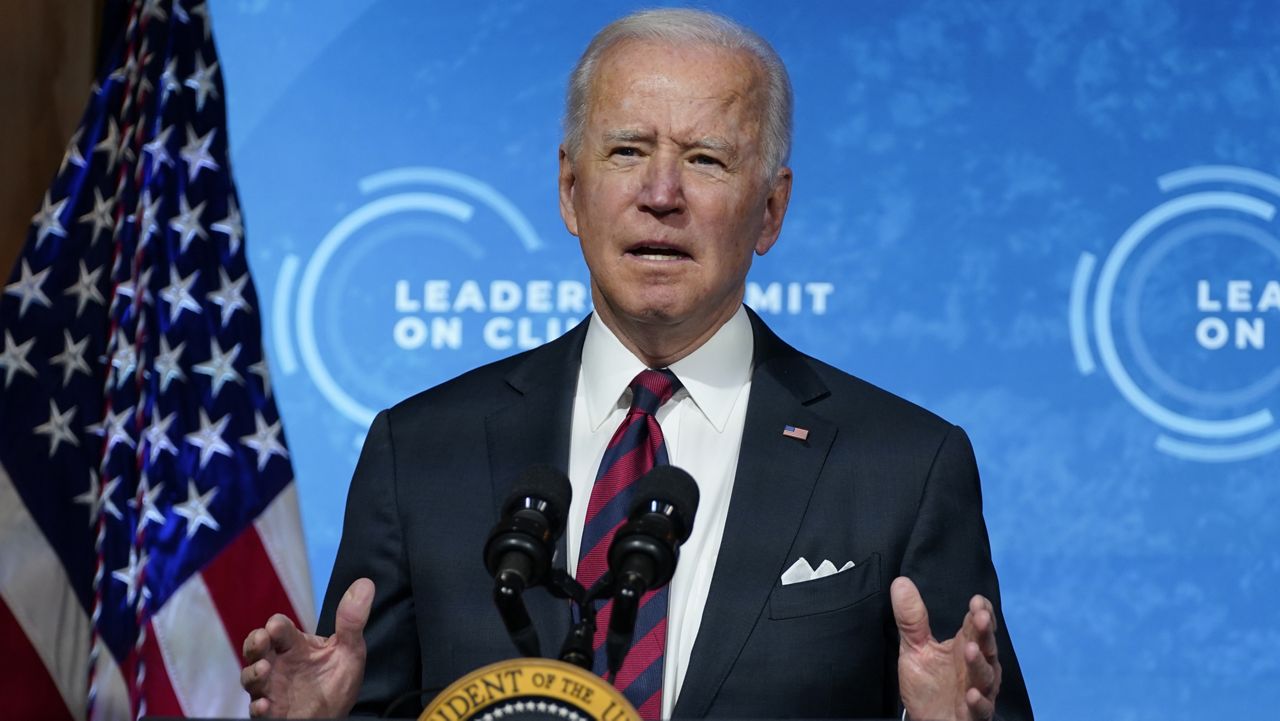 President Joe Biden speaks to the virtual Leaders Summit on Climate, from the East Room of the White House, Thursday, April 22, 2021, in Washington. (AP Photo/Evan Vucci)

Biden pledges to cut greenhouse gas emissions in half by 2030: 'The cost of inaction keeps mounting'

WASHINGTON — President Joe Biden opened a global climate summit on Earth Day with a pledge to cut at least in half the climate-wrecking coal and petroleum fumes that the U.S. pumps out by 2030, a commitment he hopes will spur China and other big polluters to speed up efforts of their own.

"The signs are unmistakable," Biden said in a speech from the White House early Thursday. "The science is undeniable. And the cost of inaction keeps mounting. The United States isn't waiting. We are resolving to take action."

"My administration is advancing the most ambitious climate agenda in our Nation's history," Biden said. "Our clean energy plan will create millions of good-paying union jobs, ensure our economic competitiveness and improve the health and security of communities across America."

"By making those investments and putting millions of Americans to work, the United States will be able to cut our greenhouse gas emissions in half by 2030," he added.

The president called it a "moral imperative" as well as "an economic imperative," noting that the world is at an inflection point in the battle against climate change, calling it "a moment of peril but also a moment of extraordinary possibilities."

"Time is short, but I believe we can do this, Biden added. "We really have no choice. We have to get this done."

His commitment to cut U.S. fossil fuel emissions up to 52% by 2030 — similar to pledges from allies — will come at the launch Thursday of an all-virtual climate summit for 40 world leaders, marking a return by the U.S. to global climate efforts after four years of withdrawal under President Donald Trump.

"It is so good to have the U.S. back on our side in the fight against climate change," European Commission President Ursula von der Leyen said.

The Biden administration's pledge would require by far the most ambitious U.S. climate effort ever undertaken, nearly doubling the reductions that the Obama administration had committed to in the landmark 2015 Paris climate accord.

"It is imperative that we act quickly and together to confront this crisis," Vice President Kamala Harris said prior to Biden's remarks.

The new urgency comes as scientists say that climate change caused by coal plants, car engines and other fossil fuel use is already worsening droughts, floods, hurricanes, wildfires and other disasters and that humans are running out of time to stave off most catastrophic extremes of global warming.

"The Biden-Harris administration will do more than any in history to meet our climate crisis," Secretary of State Antony Blinken said Monday in a speech ahead of the summit. "This is already an all-hands-on-deck effort across our government and across our nation. Our future depends on the choices we make today."

“The United States is not waiting, the costs of delay are too great, and our nation is resolved to act now," the Biden administration said in a statement. “Climate change poses an existential threat, but responding to this threat offers an opportunity to support good-paying, union jobs, strengthen America’s working communities, protect public health, and advance environmental justice.”

But Biden administration officials, in previewing the new target, disclosed aspirations and vignettes rather than specific plans, budget lines or legislative proposals for getting there. Administration officials briefing reporters in advance of Biden's announcement made no direct mention of politically tricky moves to wean the U.S. from oil, natural gas and coal. They emphasized the role of technology, including carbon capture and hydrogen power, which have yet to be affordably developed to scale.

“I think we will get the job done, as President Biden said today,” John Kerry, the U.S. Special Presidential Envoy for Climate, said at a White House press briefing on Thursday. “That's why I'm here doing this, folks, and not, you know, the private sector or retired and doing some things, because I believe this moment is the moment.”

"It’s Joe Biden's unwavering focus on people, on the air they breathe and on their health, on the strength of their communities and environmental justice, on the dignity that comes with good work in jobs we can create," White House climate adviser Gina McCarthy said at the briefing.

Biden and Vice President Kamala Harris were scheduled to open the Earth Day summit from the White House East Room before world leaders, including the heads of China, Russia, India, Gulf oil states, European and Asian allies and island and coastal nations already struggling against the effects of climate change. Pope Francis will also take part.

Good ideas and good intentions aren’t good enough.” Biden said. “We need to ensure that the financing will be there.”

Biden said that combatting climate change will require mobilizing finance on an unprecedented scale, teasing that the U.S. on Thursday will announce an international climate finance plan. The plan would involve not only governments but also the private sector, including calling on Wall Street to join the climate fight.

Biden says investing in green businesses isn’t a drain on the economy but an opportunity. He says climate change “is more than a threat” and presents the largest opportunities for job creation in the future.

Due to the coronavirus pandemic, the summit will play out as a climate telethon-style livestream, limiting opportunities for spontaneous interaction and negotiation.

With the pledge from the United States and other emissions-cutting announcements from Japan, Canada, the European Union and the United Kingdom, countries representing more than half the world's economy will have now committed to cutting fossil fuel fumes enough to keep the earth's climate from warming, disastrously, more than 2.7 degrees Fahrenheit, the Biden administration said.

Biden, a Democrat, campaigned partly on a pledge to confront climate change. He has sketched out some elements of his $2 trillion approach for transforming U.S. transportation systems and electrical grids in his campaign climate plan and in his infrastructure proposals for Congress.

His administration insists the transformation will mean millions of well-paying jobs. Republicans say the effort will throw oil, gas and coal workers off the job. They call his infrastructure proposal too costly.

“The summit is not necessarily about everyone else bringing something new to the table — it’s really about the U.S. bringing their target to the world,” said Joanna Lewis, an expert in China energy and environment at Georgetown University.

It’s an urgent but hardly perfect time for the U.S. to try to spur action.

The world's top two climate offenders, China and the United States, are feuding over non-climate issues. Chinese President Xi Jinping waited until Wednesday to confirm he would even take part.

India, the world's third-biggest emitter of fossil fuel fumes, is pressing the United States and other wealthier nations to come through on billions of dollars they've promised to help poorer nations build alternatives to coal plants and energy-sucking power grids.

“Where is this money? There is no money in sight,” Environment Minister Prakash Javadekar said earlier this month, after a visit from Biden climate envoy John Kerry.

Russian President Vladimir Putin, whose nation by some assessments is the world's fourth-worst climate polluter, also accepted the U.S. invitation but is fuming over Biden calling him a “killer," as part of high tensions over Putin's aggressiveness abroad and U.S. sanctions.

"Russia is genuinely interested in galvanizing international cooperation so as to look further for effective solutions to climate change as well as to all other vital challenges," Putin said.

Putin says Moscow is ready to offer a number of joint projects and consider preferences for foreign companies willing to invest in clean technologies, including those in Russia. He said he has directed the Russian government to "significantly cut the accumulated volume of net emissions," but did not commit to a specific goal.

Brazil’s President Jair Bolsonaro has shifted his tone on preservation of the Amazon rainforest at the U.S.-led climate summit, exhibiting willingness to step up commitment even as many critics continue doubting his credibility.

Bolsonaro said he's "determined that our climate neutrality will be reached by 2050."

Bolsonaro says Brazil requires outside funds to curb deforestation of the world’s largest tropical rainforest. Last week, a group of 15 U.S. senators penned a letter to Biden complaining of Bolsonaro’s woeful environmental track record and urging the U.S. to condition any support for Amazon preservation on significant progress reducing deforestation.

And at home, political divisions exposed by Trump's presidency have left the United States weaker than it was at the 2015 Paris accord. Unable to guarantee that a different president in 2024 won't undo Biden's climate work, the Biden administration has argued that market forces — with a boost to get started — will soon make cleaner fuels and energy efficiency too cheap and consumer-friendly to trash.

"The world as a whole is moving in this direction, because these companies have made this critical long-term strategic marketing judgment. And that is the way the market’s moving," Kerry said, adding: "No politician — no matter how demagogic or how potent and capable they are — is going to be able to change what that market is doing because it will have moved."

Having the United States, with its influence and status, back in the climate game is important, said Lauri Myllyvirta, lead analyst at the Centre for Research on Energy and Clean Air in Helsinki.

But hoping the world will forget about the last four years seems like wishful thinking, he said.

“There is too much of an impulse in the U.S. to just wish away Trump’s legacy and the fact that every election is now basically a coin toss between complete climate denial and whatever actions the Democrats can bring to the table,” he said.