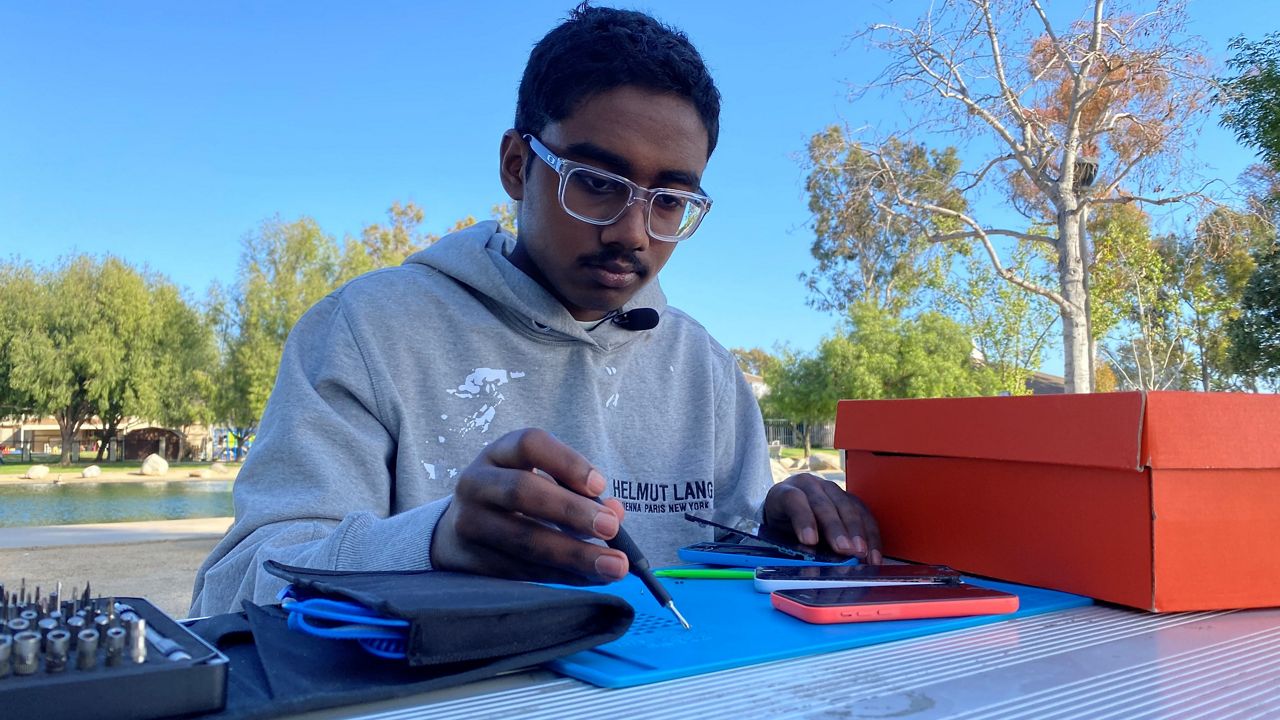 Irvine teens fight for your right to repair your smartphone

IRVINE, Calif. — Nothing gets thrown away before Rishi Padmanabhan gets a chance to fix it.

“I believe when I was 6, I connected a GPS to our television just to see if I could,” he said.

Rishi is a 15-year-old sophomore at Irvine High School, where he founded the Irvine Repair Consortium. His club scours the internet to find broken iPhones that they can diagnose, repair and sell for a profit.

“A lot of phones online, especially eBay, sometimes it’s like the Wild West. So we make sure not to buy phones that are locked or reported stolen. Anything shady, we don’t buy those,” Rishi said.

Inside each phone, Rishi takes apart pieces made from precious metals like gold, cobalt and lithium.

According to a study, 1.4 billion phones are produced and sold every year, with Americans upgrading their phones every two years, generating toxic e-waste.

Rishi said a way we can reduce e-waste is if lawmakers pass the Right to Repair laws. Currently, smartphone manufacturers are limiting people from repairing their own devices by requiring specific tools or authorized parts.

“Some manufacturers opt to replace the whole product for a fixed fee versus repair the individual part which is great for the consumer in a way that they get a brand new device, but it’s horrific for the environment because then a device that can be fixed easily just gets thrown away,” Rishi said.

One of Rishi’s biggest club supporters is his dad, Ravi Vishwanathan.

“He wants to really run it as if it were his own business and learn how business works. In the end, it’s all for a good cause. He’s really done me proud,” Vishwanathan said.

Rishi said his club has repaired about 70 phones so far and has donated proceeds to local charities. Rishi knows he can’t fix or end e-waste, but he hopes that by empowering people to fix their phones, they can reduce their carbon footprint.

Rishi’s club is raising money to help purchase more phones so his members can continue to repair more phones and help save the environment. Proceeds made from repairing phones will go to charities around the world working to save the planet. For more information, visit https://www.irvinerepairconsortium.org/donate.