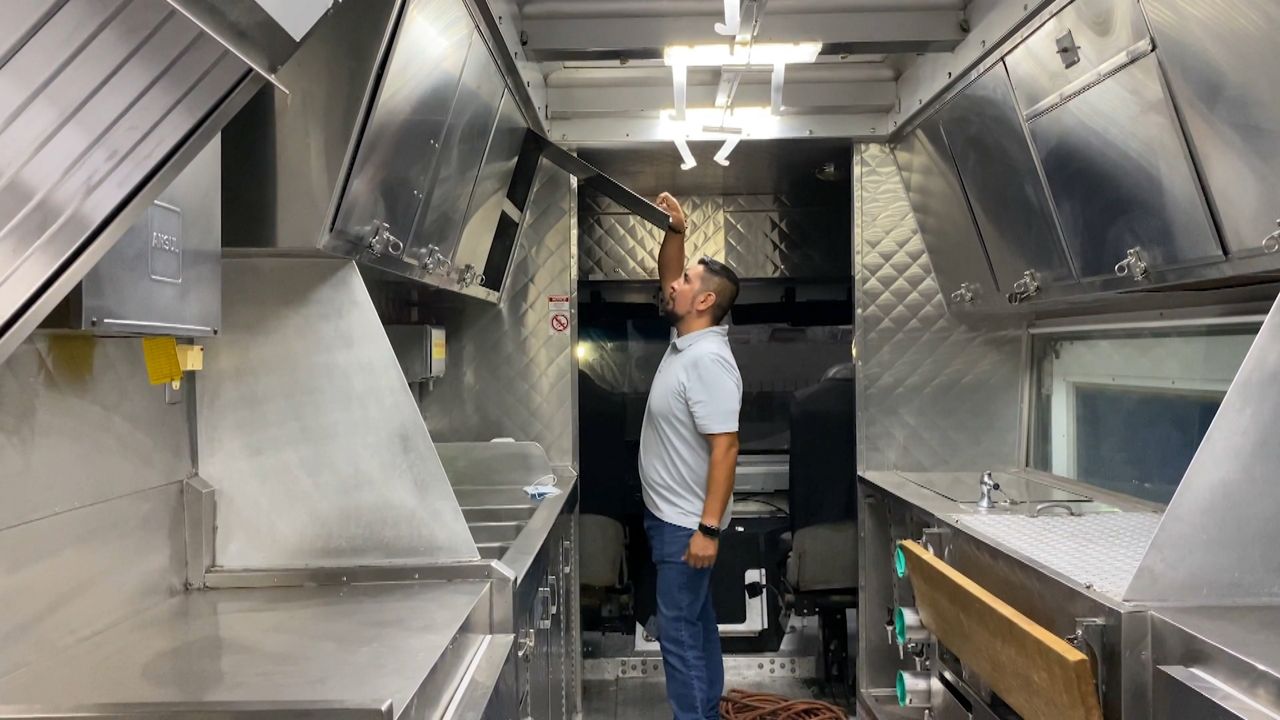 LOS ANGELES — Beverly Estrada, a single mother of four, is on her feet all day working at a local grocery store, but at 5 p.m., she is just getting started on her second job.

“Right now I’m prepping mole tamales so I can have everything ready, set up to go sell tomorrow around 5 or 6 in the morning approximately," she said.


For years, Estrada has worked on and off as a street food vendor. This latest time began a year and a half ago.

“Due to COVID, they were cutting days at work, and therefore I had to start to think about how I was going to provide for my family and income for them,” she said.

Going back to street vending was something Estrada was dreading. She had already tried to sell food on the streets before and says it cost her thousands of dollars, a year and a half and seven inspections by the health department to make a street cart that would be approved.

"If there is a knob in the wrong place, they will deny you," said Estrada. "If it’s the type of refrigerator, commercial refrigerator you need, they deny you."

Then, a few months after she finally got it approved, Estrada had to sell it because she couldn’t afford to pay the fees at the county-approved commissaries, where vendors are forced to keep and prep their food. The experience was traumatic.

"You feel like, at points, just giving up," she said.

So when the COVID-19 pandemic hit, Estrada saw no other way out. With no time and money to go through the legal hoops all over again, she turned to selling tamales from the back of her car — which is a health code violation.

“One day, the health department came and they had a dumpster truck, and they started going from vendor to vendor dumping their food out to the dumpster truck, giving them a ticket and telling them to leave,” she said.

Estrada added that she lost more than 12 hours of labor and hundreds of dollars in food.

“Those are the moments that you get devastated because you feel helpless, because there is no other way out,” she says.

But that might soon change because in April of this year, engineer Richard Gomez — who has been designing carts and food trucks for 20 years — was able to get the first ever hot food sidewalk vending cart design approved by the Los Angeles County Department of Public Health.

“You would think with my experience, I would be able to design a cart that is so simple very quickly, but the regulation is so strict that it took three years to get an approval,” said Gomez, who works at Revolution Carts.

That’s because the California Retail Food Code does little to differentiate between brick and mortar restaurants, food trucks, street carts and sidewalk vendors — often forcing them all to meet the same plumbing, ventilation and refrigeration requirements. Of an estimated 10,000 sidewalk food vendors working in the city of LA, only 165 have received permits, according to a recent report by Public Counsel and the UCLA School of Law Community Economic Development Clinic.


That’s why Gomez’s pre-approved design is such a game changer. It’s plug-and-play.

"The cart is literally a mobile steam table," he said. "It works with propane, so it does not need electricity. There are different carts that are approved, but none [except for the Ice Cream Paleta cart] have been approved to be used on the sidewalk. Then you’re free to roam the city with your tamales at the right temperature."

The Tamalero Cart can hold 336 tamales. It costs $7,500, but financing will be provided through a local community development organization. Gomez hopes to design Taco and Hot Dog sidewalk carts next.

Estrada was one of the first to pre-order the Tamalero Cart and hopes to be selling out of it by November.

"I’m so excited due to the fact that I’m no longer going to be an outcast," she said. "I feel that’s going to be a better impact in my kid’s life because I will be able to provide a lot more for them."