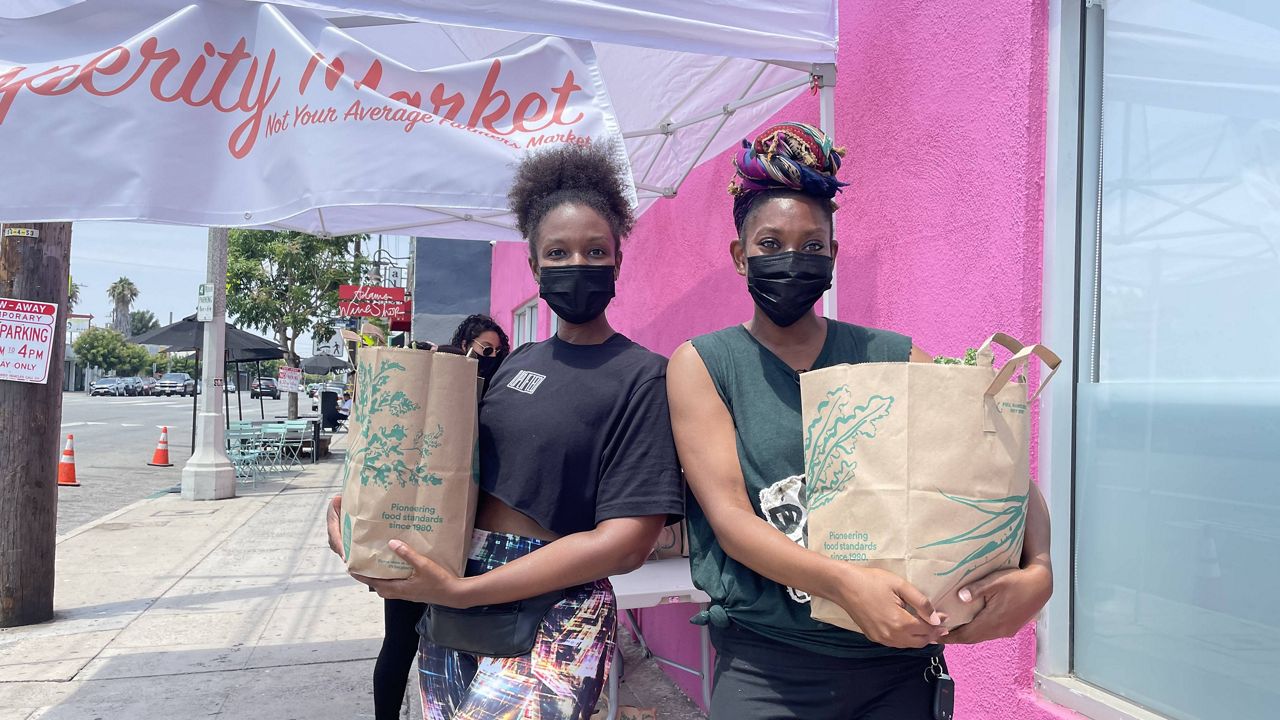 2 women want to put a farmers market on wheels

LOS ANGELES — Before the pandemic, Kara Still’s career looked a lot different than it does today.

“I was in fashion design!” She laughed. “All the details in the way your clothes are constructed in what I was doing.”

While she still does some freelance design work on the side, today she is spending all her free time dreaming up ways to disrupt the traditional farmers market model. Her business partner Carmen Dianne, who is a makeup artist by trade, is right there with her.

“This took over, it literally took over and I wasn’t thinking about makeup anymore. It’s like tunnel vision,” said Dianne.

Still and Dianne were inspired to help give back to the Black community after the death of George Floyd, and said they found a way to do it through the farmers market space.

Both put their careers on the backburner and together started Prosperity Market.

“We are a mobile Black farmers market and we support Black farmers and food entrepreneurs,” Still explained to a customer. “We go all over LA monthly doing different stops in different locations.”

“If you live in North Hollywood or the Westside, or you kind of live far away, you don’t always have the opportunity to support Black businesses,” said Dianne.

One part of the business model are the roving produce giveaways, which usually happen in and around South LA, to address food access problems.

The bags are packed with food from Black-owned businesses, like Misha’s Cream Cheese, and produce from Black farmers.

The Sunday produce giveaways are just one aspect of Prosperity Market because their biggest goal is to raise enough funds to build out a farmers market on wheels in the form of a modified super trailer compartmentalized into two parts.

“The back is like a grocery store, so you can go in it and shop. And the front is essentially a kitchen and a food truck,” said Still as she explained that the front will be for food demos or a place where Black food entrepreneurs can get exposure for their products.

Still and Dianne said that by being on wheels instead of the traditional stationary market it will allow them to go even further into areas of LA not currently serviced by farmers markets, more frequently.

This would allow them to help more people on both sides of the farmers market model.

People like Briann Battle, one of the Black farmers featured in Prosperity Market, who is well known for her homemade lemonade.

Spectrum News 1 joined Still and Dianne to visit Battle’s urban farm where she has dozens of fruits and vegetables growing in a small patio.

“It’s been a blessing to teach my kids entrepreneurship and be a Black business owner, and have this amazing opportunity. I’m just so thankful,” said Battle.

However, it will be an expensive venture that will keep Still and Dianne working hard. The pair has already put a down payment on a trailer, but in order to finish it, they still have to raise over $100,000.

They are taking donations on their website at prosperitymarketla.com.

In the meantime, they said, they will be out every weekend changing the blueprint of the traditional farmers market, and increasing food access and security, on foot.