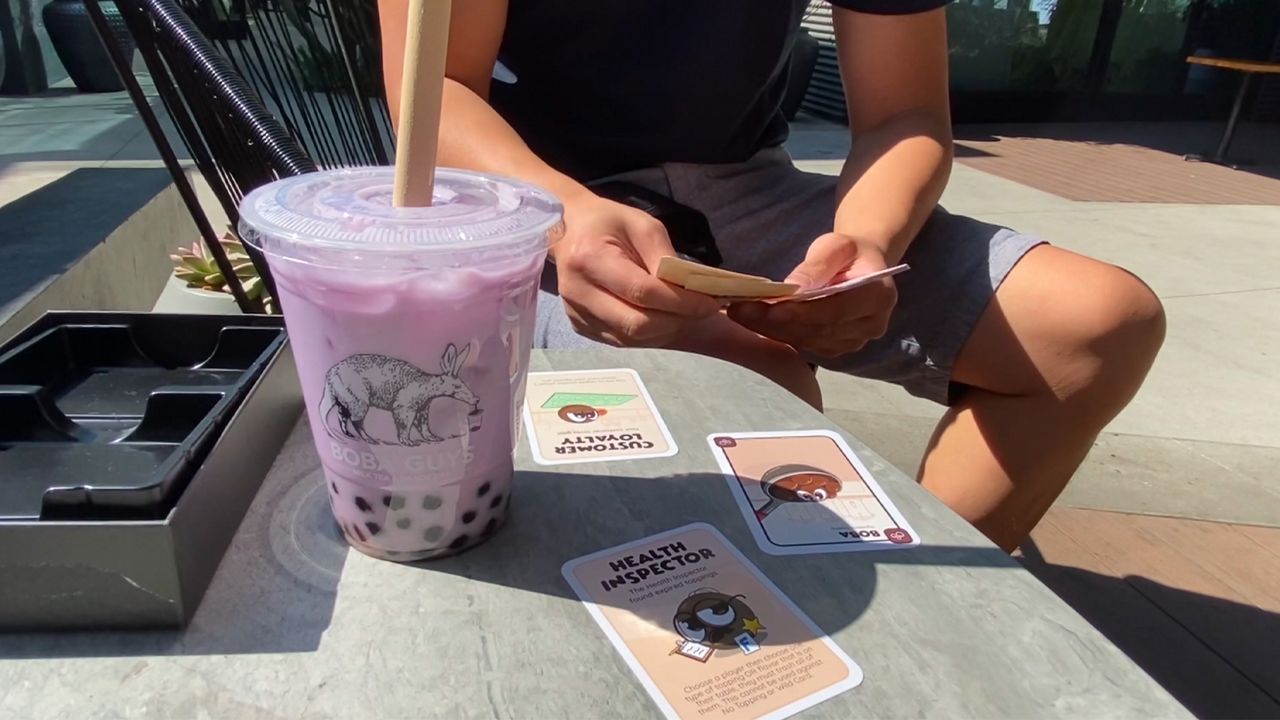 CULVER CITY, Calif. — Growing up, entrepreneur Eric Chen would often grab a bubble milk tea, also known as boba, with friends or family at a local café. The milky drink with tapioca balls, which originated in Taiwan in the 1980s, didn't always sit well with his stomach.

"I'm actually lactose intolerant, so back in the day, a lot of these shops didn't offer a lot of different flavors, and so it was not an enjoyable experience," Chen said.

These days, Chen still drinks boba but in flavors that don't include dairy, like passion fruit green tea. The lifelong connection to the drink, which is wildly popular in Asian culture, is also a source of inspiration for a game he created. It's an idea that was brewing ever since he survived a major car accident several years ago when his friend fell asleep at the wheel and hit a tree.

"The bulk of the accident was on my side of the car, on the passenger area, and so I experienced most of the trauma," he said. "The seatbelt had ended up cutting into my stomach and rupturing my internal organs."

He has no memory of the accident and, during a grueling year-long recovery, experienced internal bleeding. It left him looking to socialize in ways that didn't involve alcohol or partying.

"I just wanted to make sure what I was putting into my body was OK, especially for how sensitive my internals would be, try to reduce just any factors from having to go through that experience again," he said.

Chen decided to leave the corporate world and, during the pandemic, focused on creating some good old-fashioned fun that anyone could partake in, from young kids to adults. That's when the idea for "Sabobatage: The Boba Card Game" sparked.

In the card game, players take on the role of a boba shop owner and race to build five complete sets of boba drinks while sabotaging others' efforts.

Chen created his game from scratch, cutting up index cards for his prototype. He said he drew on his experience in launching products and marketing and tested the game for hours with focus groups.

"I would ask them to have a Zoom call with me, and so I could just sit there and watch them play and observe as if this was a one-way mirror," he said. "I had my notepad, just writing notes."

This game comes along as people are spending more time at home, looking for different entertainment forms during the pandemic, as evidenced by toy giant Hasbro reporting a 21% increase in its board game sales at the end of last year. Chen said he sees a lot of enthusiasm for his game as supporters contribute to his Kickstarter campaign to help grow his company.

"With the rise of the popularity of boba, it ties a lot of boba lovers into the game," he said. "But it also introduces a lot of people who might not have heard of boba in the first place.