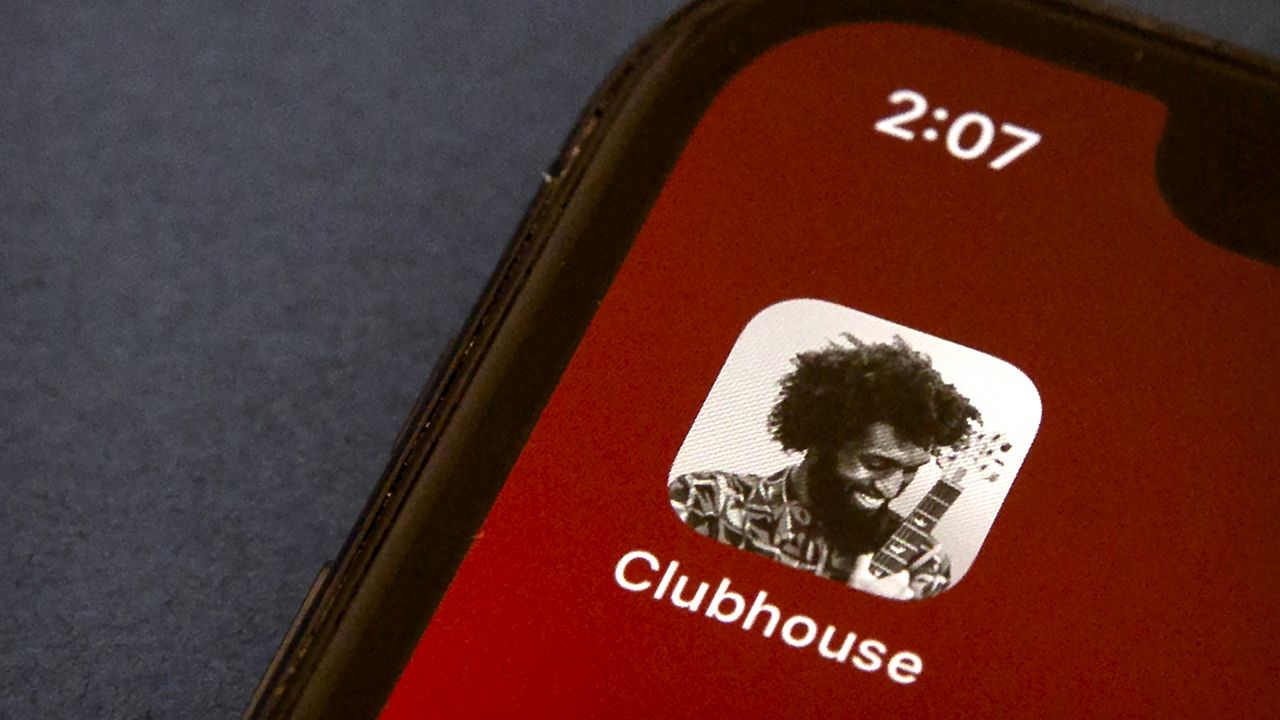 Clubhouse, an invitation-only audio chat app launched less than a year ago, has caught the attention of tech industry bigshots like Tesla CEO Elon Musk and Facebook CEO Mark Zuckerberg, not to mention the Chinese government, which has already blocked it in the country. (AP Photo/Mark Schiefelbein)

A new app called Clubhouse has exploded in popularity, gaining more than 10 million users in just a few months.

The app is an audio-only interactive streaming platform. Famous names like Elon Musk and Oprah and social media influencers are on the app, but it has also attracted its share of grifters and scammers.

Business reporter Sam Dean joined Spectrum News 1 anchor, Lisa McRee on LA Times Today with more on what this app is all about.

The application is simple to use but can only be accessed through an invitation.

“You sign in, you create a profile, and then you can scroll through a bunch of ongoing conference calls. They can go up to thousands of users at one time, but some are as small as five. And, it is just kind of an infinite world of audio you can swim through. You can follow people so you could be notified when they start talking. You can have private rooms for private conversations, and you can join clubs which have series of these conference call events,” said Dean.

Once a user joins one of the rooms, they can ask questions to the speaker or moderator.

“The room is split between the stage and audience. If you’re in the audience, you can raise your hand, you’ll be brought up to the stage, and then you can talk or unmet yourself like if you’re in a conference call. But the vast majority of people are in the audiences just listening,” added Dean.

Dean adds that part of the app’s popularity has to do with exclusivity.

“People know it invites only, and it feels a little exclusive, and they want to get in; every person gets a certain number of invites, and at a certain point, it just rockets up. As far as usage, I have talked to people who use the app for six or seven hours a day. And, there is not much to do for a lot of people. Even people with families, jobs, and things to do, it is a combination of the intimacy of a phone conversation with a friend, with the excitement of a live event with maybe someone famous or someone who knows a lot about something so you can join in an ongoing semi-public event.”

The application came out last summer, and it only had a couple of thousand users, but it slowly started to pick up professional communities in Los Angeles.

“It attracted the music industry, film industry, a lot of Black artists, and now it has expanded to everyone. You can go on, and you’ll find people talking about Nigerian politics; you’ll find people talking about how cryptocurrencies are working in Ireland. It is really all over the place. People also started staging live musicals. There was a Lion King musical that was kind of a watershed production in December. Now they are running original romantic comedies about Clubhouse. It is really going all over the place,” said Dean.

Some celebrities that use Clubhouse include Oprah, Kanye West, and Elon Musk.

“The real-world celebrities have brought in huge bumps of people because the word goes around. Like when Elon Musk was doing his first room, suddenly everyone floods in, and the app almost crashes; there is an overflow of rooms of people talking live about what he is talking about because they cannot all fit in. There have been some homegrown celebrities on the app too. This one guy I spoke to, Bomani X — he was in L.A., now he is back in the East Coast — he was a local digital strategist and musician in L.A. who signed on early and started hosting weekly club events called the Cotton Club where he and his friends would play music. Now he has over three million followers, and he has built a whole career in the past few months out of this app,” added Dean.

While the app has gained more than 10 million users in the last few months, it has also attracted scammers.

“Anytime that enough people get in one place, and there is a new audience, people show up to try and take advantage of them. At this point, with the existing social networks, we are used to it, but in Clubhouse, it has this effect it has this live feature, so it is easier for people to pitch their services — whether it is real or not — and if you are new to the app, it is hard to know what is real and what is fake," said Dean. "I spoke to people that are part of this anti-grift squad that calls out people who are doing this stuff, and it runs the range of things as simple as people trying to sell invites or fake blue check markers like on Twitter. It goes to much more advanced things to ask people to come up and pitch their business idea. While they pitch their idea live on audio, they are going and registering a domain name that is the name of the business while trying to extort money out of them to sell it back. Or people are pretending to be a literary agent saying that they will read your book for a fee to help you get published. If you are a DJ, they ask you to play your track, and they steal it. So there are definitely some sharks in the water."