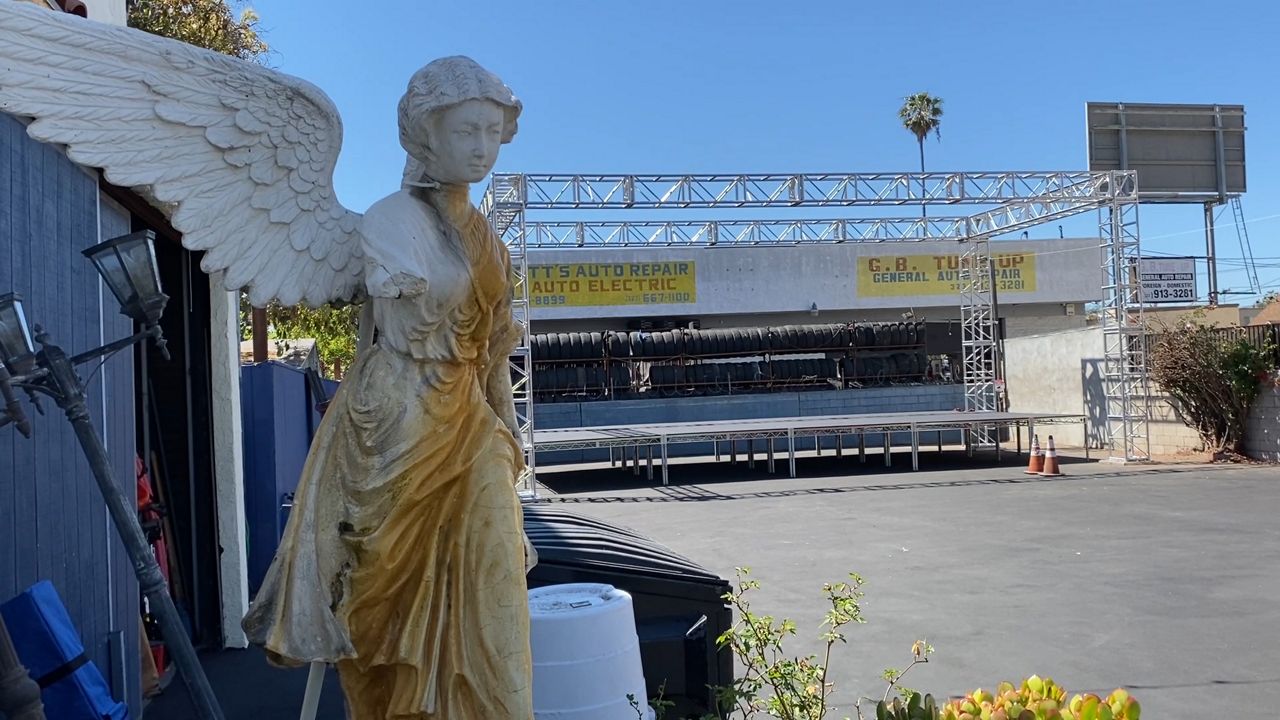 HOLLYWOOD, Calif. — While a brand new stage was being constructed piece-by-piece in the Fountain Theatre parking lot, actress Aleisha Force bounded in with all the enthusiasm of a contestant on "The Price is Right."


It’s safe to say Force is pretty excited. This sneak peek of the new stage was an unexpected bonus on an otherwise mundane errand. Force came to the theater to retrieve a pair of her personal shoes that she last wore on March 9, 2020 while performing in the Fountain Theatre’s production of "Human Interest Story."

A recent transplant from New York, Force had made the production her first LA audition and booking, but her West Coast debut didn’t go as planned.

“And I got to do exactly one-half of one play before the pandemic put us on pause,” she said.

Force's personal belongings have been locked in this dressing room ever since. She explained how coming back just to pick up her things feels unceremonious, but after seeing a room filled with dozens of stacks of red chairs for the new outdoor theater, she can’t wait to take her seat in the audience next month.

“I mean, this is literally going to be the first theater that I see since when we shut down,” she told Sachs.

It's not a moment Sachs been waiting for, but rather a moment he’s been working toward for an entire year.

“I was out here this morning and yesterday watching all of this come up,” he shouted over a cacophony of clanging, as the steel-based stage was being built behind him. “I just felt that I can breathe again.”

Immediately after things shutdown, as Sachs explained, the idea to create an outdoor theater space came quickly, almost like a pipe dream.

Sachs added that he had no idea how complicated that adventure would be.

“The hoops we had to jump through and the hurdles that we had to cross, it was a long arduous journey," he said. "But the city is behind it 100% and so is the Los Angeles theater community.”

There are several benefits to being outdoors. The new stage is actually much larger than the one inside, which also has a significantly lower ceiling.

The other benefit is seating.

“Indoors we just have 80 seats, so with COVID spacing, that would reduce the seating capacity down to 12," said Sachs.

Outside, however, Sachs can space out enough chairs for 80 to 99 patrons to park themselves for an evening of live theater.

There will of course be COVID-19 precautions in place. Seating will be grouped by household or “bubble” with a six-person limit. These pods will be spaced six feet apart and at least 12 feet from the stage. Temperatures will be checked upon arrival, and audience members will have to remain masked.

Cast and staff at the theater have all been fully vaccinated, and the cast will perform maskless.

The Fountain Theatre will be presenting one play this summer — the LA premiere of "An Octoroon," which opens in June. Sachs described the award-winning play as a bold piece of theater that deals with racism and humanity head-on. As one of the original founders, he explained how the Fountain was created to be an advocate for human rights and social justice, and he chose this play specifically to be true to their mission.


To Sachs, theater is an act of service “to generate dialogue, national conversation, civic interaction and engagement around these important and urgent issues.” Some performances will also be followed by what he promised will be robust conversations in “true Fountain Theatre style.”

The stage will also be used for community engagement programs and flamenco performances, and Sachs hopes other theater companies will make use of it as well. He doesn’t want this to be a space just for his theatre, noting how he envisions it as a gift to the city.

“A new outdoor venue that I plan to be a fresh cultural landmark for the city of Los Angeles,” he said.

And not just until the pandemic is over — Sachs plans bring this outdoor stage back year after year, long after the doors can reopen, which he suspects will be late this year or early next.

But now that the new this stage in place, the next play will happen much sooner than that, and Force gave Sachs all the credit for making it happen.

“You took an excellent gamble, did so much work and guess what? We’re going to get to see theater again," she said.