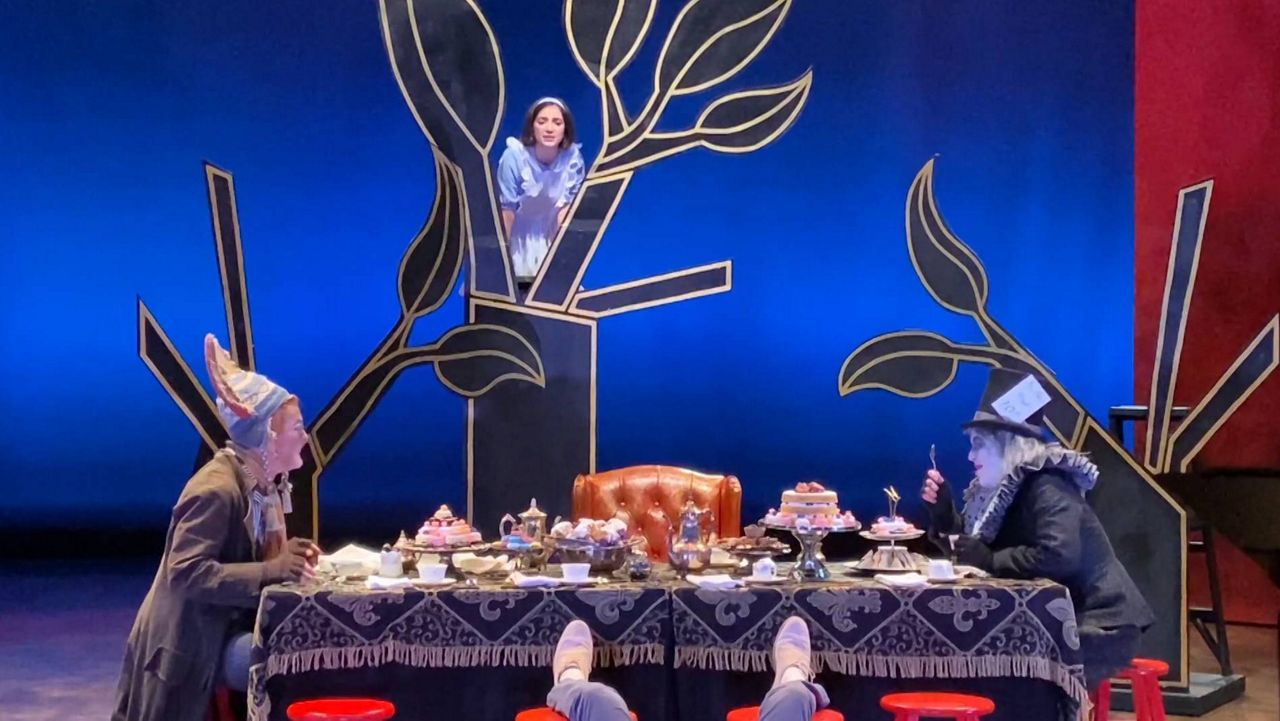 "Alice in Wonderland" features most of the original cast for the 2020 production.

PASADENA, Calif. — As he swept upstage, towering Justin Lawrence Barnes bellowed, “Get to your places.”

What followed were actors scrambling to fall in line.


As the Queen of Hearts, Barnes may be bossy in his delivery, but every actor in the company is thrilled to finally hear places called.

Standing backstage on the first day of rehearsal, Erika Soto said she was overcome with emotion.

“I was watching from the wings and seeing all my friends out there,” she said. “Then they start the music, and I just started crying backstage because I was so happy. I just thought, wow. I feel more joy now than ever I think because it was taken away for so long,” she said.

Soto plays Alice in A Noise Within’s production of “Alice in Wonderland,” which originally opened in March 2020 — only six days before theatres were forced to shut their doors.

“Boom — rug pulled out from under you, and honestly I was devastated,” said Soto.

For herself, for her castmates and for audiences who had been looking forward to taking the journey to Wonderland. Now, 13 months later, that journey continues. The cast is back on the familiar three-quarter round stage, which, for resident artists, is a home away from home.

“We’re all just family together,” actor Kasey Mahaffey said. “It felt like coming into your house that you have been away from for a year.”

That is just one of the many reminders that the pandemic continues, even as the cast returns to the stage. Another are the masks and face shields actors wear between scenes, but perhaps the biggest reminder is the empty house with more than 300 unoccupied seats surrounding the stage.

Instead of an audience, cameras have been brought in and placed around the room to catch every angle of the action.

Julia Rodriguez-Elliott, one of the founders of the theatre company, did not direct last year’s production but is now at the helm and adjusting the original vision both for film and for safety.

For instance, in the pre-pandemic stage version, Alice would jump on the Griffin’s back and they would fly away together. Rodriguez-Elliott said that kind of contact, even with all the required COVID testing and safety measures, just is not possible. Instead, they will be riding bicycles.

“You know, what you find is that sometimes these imitations reveal some wonderful opportunities,” she said.

“There’s no arguing that the magic of theatre is the most exciting thing,” Mahaffey said. “However, I think through the medium of film. There’s going to be new things kicked up in this production that we didn’t get to explore when it as a play.”

Make-up and costumes, he added, can be much more elaborate now, since the actors no longer have to quickly slip out of one character and into the next during a three-minute quick change.

Filming the production also increases access, allowing their work to be seen by far more people than the theatre can hold.

It's a world Rodriguez-Elliott expects the company continue exploring, even after audiences can return.

“What are the things that have been really valuable during this time that we don’t want to let go of? Again, not as a substitute for the live experience because to my mind there is really no substitute to that, but there are things that we can do so that there is more access,” she said.

Soto meanwhile is counting the minutes until she can perform for a live audience again.

“Are you looking forward to having an audience?” Mahaffey asked her.

“Please, just bring them all in here,” Soto answered.

Not only does she not mind the testing, retesting and careful COVID compliance rules they have had to adhere to, Soto said she is grateful for it because it has allowed them to get back to work.

“Actors and creative people are super resilient,” she said. “You know, ‘the show must go on’ is a real thing."

In the original story, Alice said, “It’s no use going back to yesterday, because I was a different person then.” With so much that has changed over the past year, slipping back into her striped tights, Soto finds she is seeing both Alice and Wonderland through a completely new lens.

“It’s sort of understanding what it’s like to be in a completely uncertain place and just literally putting one foot in front of the other, not knowing what’s going to happen next,” Soto said. “And then also giving over to the magic and the wonder wherever you find it.”

The show begins streaming on May 27. Soto expects it will be very fun for audiences to watch.

"We are all in such desperate need for magic and freedom and fun," she said.

For information on “Alice in Wonderland” and “An Iliad,” which was filmed last month and is currently streaming, visit here.